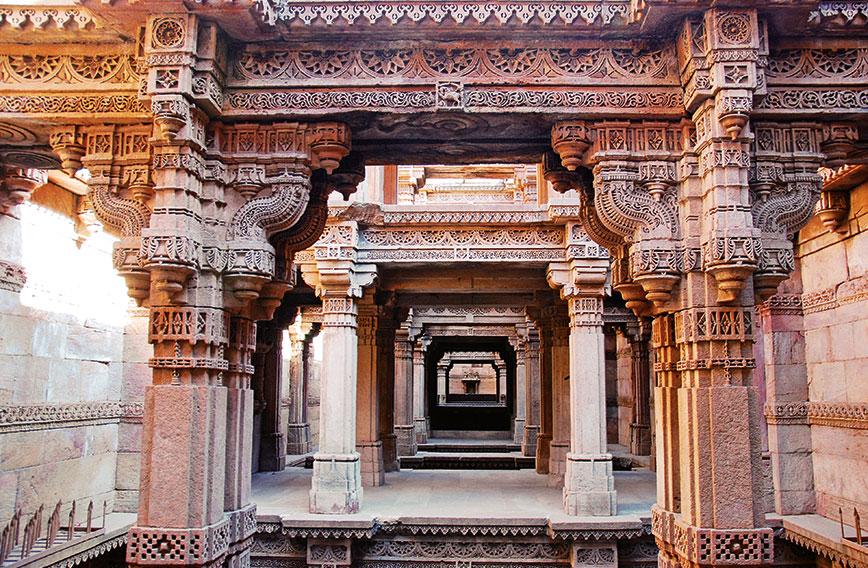 The Adalaj stepwell is an architectural wonder

Wondrous stepwell and a love story in Adalaj

A 20-km detour from the city of Ahmedabad took me to Adalaj, a village reputed for an architectural wonder: a marvellous stepwell or vav built in 1499 to hold water, offer spiritual sustenance and be a refuge for travellers and local people.

As soon as I stepped into the ornate five-storied structure, I was bowled over by its striking beauty.  What makes Adalaj distinct from other stepwells is its spectacular mix of Indo-Islamic architecture and design. The legend behind its genesis is as intriguing as its architectural brilliance. The saga of the stepwell’s creation has elements of love and war, devotion and betrayal.

As I strolled around, I observed the details of this story inscribed on walls and pillars in Sanskrit and Pali. The Adalaj vav was commissioned by Rani Roopba, the queen of Rana Veersingh, a local chief who was vanquished by the Muslim ruler, Mohammed Begada. The Vaghela queen had already begun building the vav, when her husband was defeated by Begada. Smitten by her stunning beauty, Begada proposed to her.

Playing it safe, the dejected queen agreed to the proposal on condition that he complete the five-storied stepwell as a sign of devotion. Enticed by her charms, Begada agreed to take up the challenging task. The excavation and construction work, which had stalled abruptly, began in right earnest. As years rolled by, an edifice juxtaposing the old Indian architectural ideals with the nobility of Islamic architecture, emerged.

When the five-storied structure was nearing completion, Rani Roopba plunged into its waters and ended her life. This has sanctified the place and many rural people carry back water from this well, like revered Ganga water. Every visitor prays for the spirit of the Rani who is believed to still live here. Begada halted construction immediately, which could explain the incomplete dome, but did not demolish it. The enraged ruler ensured that this exemplary stepwell would not be replicated and hence put to death the masons involved in its construction.

One can spend endless hours gaping at the stunning beauty of this sculptural extravaganza.

Weaving my way through the passageways and the ornate pillars of this naturally air-conditioned vav, I marvelled at the dexterity of the skilled sculptors. What grabbed my attention was the enormous, rectangular vav with strong arches and pillars placed as if guarding the centrally-placed vav full of cool, fresh water. Built of sandstone, the stepwell at Adalaj consists of octagonal landings, huge colonnades embellished with a profusion of carvings and exquisitely carved niches. As I descended, I could sense a perceptible drop in temperature — a natural air-conditioning system of sorts. The temperature is always six degrees cooler than outside. This helped keep the water cool even in the scorching heat of summer.

The vav stands as the only major monument of its kind, with the entrance stairs leading to a stepped corridor. Three entrances meet at the first storey underground, in a huge square platform. There are openings in the many ceilings which make for good ventilation for the octagonal well. However, direct sunlight does not touch the flight of steps or landings except for a brief period at noon. We found the structure’s interplay with light striking.

The influence of the earlier Solanki ruler is perceptible in the combination of Hindu and Muslim architecture. Other wondrous carvings are the leafy creepers. Typical adornments of Muslim architecture coexist with Hindu symbols such as animal motifs, the bird, the horse and the elephant together with navagrahas and images of Goddess Shakti.

The vavs are essentially rectangular structures with the opening to a flight of descending steps at one end and the shaft to the inner well at the far end. I was beguiled by the decorative theme of jousting elephants as a continuous motif on the walls and pillars right from the beginning of the steps until the penultimate level. Juxtaposed with these are motifs in the form of geometric and floral patterns.

Other carvings on the panels depict the lifestyle of those days — women performing daily chores like churning buttermilk, leisure activities of people,  a king sitting on a stool with two chauri bearers, musicians accompanying dancing females besides abstract symbols of gods and goddesses.

I observed traces of Buddhist and Jain influences on some of the pillars and walls. The Ami Khumbor or pot holding the water of life and the Kalp Vriksha, the tree of life sculpted in a niche from a single slab of stone, held us spellbound. There is a belief that the small friezes of navagrahas at the edge of the well, protect the monument from evil spirits and bad omens. These depictions are said to attract villagers for worship during marriages and other ritualistic ceremonies.

Built as a resting place for pilgrims and traders, the vav obviously fulfilled a ritualistic as well as a utilitarian need. These wells supplied water certainly but also rewarded the effort of reaching the spot with ‘rest for weary bones and a sight for sore eyes.’

In the past, travellers used to stop by to quench their thirst. These subterranean vavs were also frequented by caravans as stopovers along trade routes to take shelter from the heat and rain. Villagers used to stop by the vav every day in the morning to fill water, offer prayers to the deities carved into the walls and interact with each other in the cool shade. I returned overwhelmed by the foresight and public-spiritedness of the creators of this stepwell who thought of conservation, given the scarcity of water and scanty rainfall in this semi-arid region.