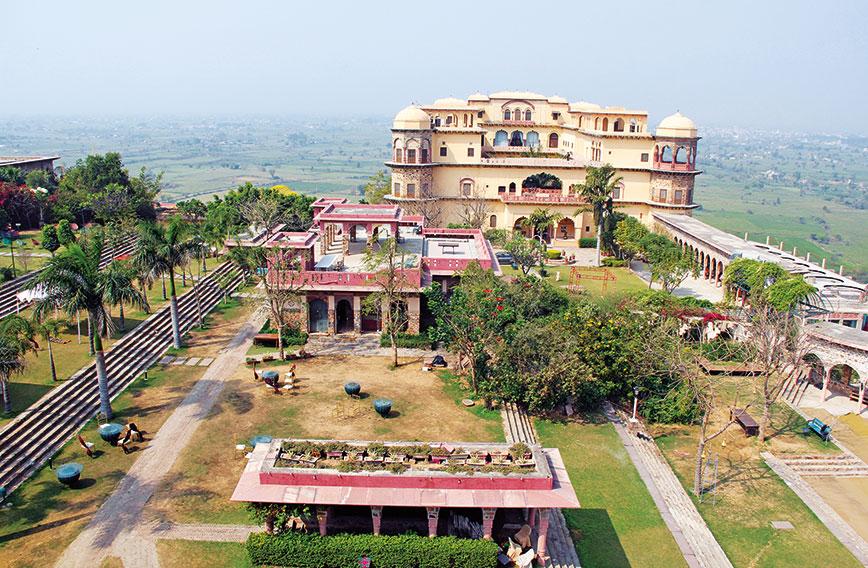 THE Tijara Fort Palace dominated the landscape for miles around as we approached it from the Alwar bypass highway. Strategically perched atop a hill, the palace is an imposing building harking back to the days of its erstwhile royalty. This majestic bastion of history has been the seat of political intrigues and public audiences, bristling with memories of hunts and battles, skirmishes and family feuds.

From crumbling ruins, the Tijara Fort Palace has been painstakingly restored to its present graceful and royal state by the Neemrana Group. The ingenuity and workmanship that have gone into this transformation are commendable. As we walked into the portals of the palace we could sense its regal elegance, which transported us to the royal luxury and hospitality of princely times.

The palace shot into prominence after it was featured in the Netflix series, The Big Day, as a destination for a fairy tale wedding. Refurbished with contemporary comforts, this exquisite palace reflects the grandeur and luxury of Indian royalty, attracting guests from across the globe.

The Tijara Fort Palace complex is a marvel of three structures, built in the Rajput-Afghan style with colonial influences. Accommodation comes in different categories: the Mardana Mahal for the royal men, the Rani Mahal for the maharanis which has balconies or terraces with superb views, and a pleasure palace on the edge of a plateau, overlooking a water-body called the Hawa Mahal, or palace of the wind. In all, there are more than 60 rooms and suites named after India’s leading artists. The palace has rooms decorated by India’s finest artists and designers and named after them. Each of the Mardana suites is named after the male artist who designed it, and the Rani Mahal showcases the creativity of the women artists. Behind the impeccably designed interiors, the fairy tale fantasy is discernible.

Each room has antique furniture, artefacts and discreet electronic comforts. Refurbished with contemporary comforts, this exquisite palace is a true reflection of the grandeur and luxury of Indian royalty, attracting guests from across the globe. The lofty entrance archways, imposing pillars, soaring ceilings, ramparts and terraces, nooks and cranies, and labyrinthine corridors hark back to the days of royalty. 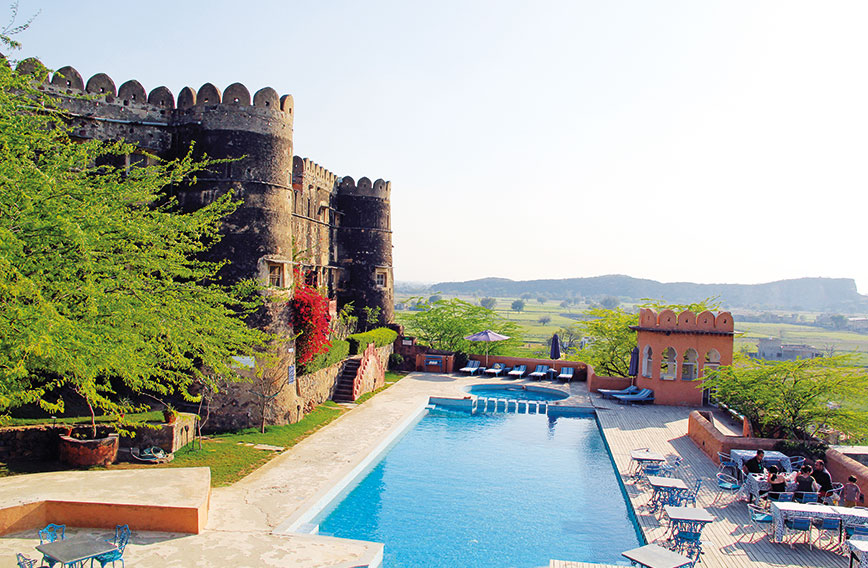 The 14th century hill fort of Kesroli is enchanting and comfortable

Another gem restored by the Neemrana Group is the 14th century hill fort of Kesroli, one of the oldest heritage sites in India. Realizing the commercial potential of such sites, a few enterprising entrepreneurs like Aman Nath, chairman, Neemrana Group, pioneered the concept of heritage hospitality and transformed several heritage properties into hotels. “From a complete crumbling ruin, inhabited by civets and bats, the erstwhile heritage properties have since become synonymous in India with architectural restoration-for-reuse. The word ‘Neemranification’ has now come to symbolize viable and sustainable heritage tourism involving the participation of local communities,” says Aman Nath.

Once upon a time, the hill fort was a strategic checkpost on the high road to Alwar, set on the only hillock for miles around. Situated atop the rare, dark Hornstone Breccia rocks, it commands a splendid agrarian view from its ramparts which rise 50 to 65 metres.

The origins of the seven-turreted Kesroli hark back to over six centuries ago. It is reputed to have been built by the Yaduvanshi Rajputs, who claimed to be descendants of Lord Krishna. A few decades later they converted to Islam and came to be known as Khanzadas. The hill fort subsequently changed hands. It was conquered by the Mughals and the Jats before reverting to the Rajputs in 1775 when the princely state of Alwar was founded. It witnessed its golden period under Ranawat Thakur Singh (1882-1934), renowned for his equestrian skills.

Kesroli fell into disarray again after India gained independence. It was eventually taken up for restoration by the Neemrana Group in 1995. The fort welcomed its first guests in 1998. All Neemrana properties are non-hotel hotels, because they were originally built for other purposes. Mammoth efforts have been made to maintain the old charm of Kesroli while ensuring basic comforts that have come to be associated with changes in lifestyle since the 14th century. There is nothing ordinary about this unbelievably enchanting fort, which has a riveting history and a luxurious present!

Kesroli offers a unique experience of seeing and ‘living’ history along with a range of activities that help guests unwind and rediscover themselves. From my room, I could peep out and gaze at mustard fields and camels from where guns were placed to shoot at the enemy! I simply enjoyed the space itself: its courtyards, winding stone pathways and turrets, the quiet of its rooms, a long breakfast or a protracted lunch by the swimming pool, and the sight of the colourful mustard fields. The food is simple and tasty and there are always some local specialities like laal maas on offer. Eating in the open under a star-studded sky with a lavish spread is indeed an unforgettable experience.

Kesroli makes an ideal base to visit neighbouring palaces, museums and temples as it is located in the heart of the ‘Golden Triangle’. On your return journey, you can cover Bala Quila, City Museum, Neelkant Temples, Jaisamand Lake, Moosi Maharani Chhatri and explore the Sariska National Park. Before you end your trip, stop by at one of the sweet shops in Alwar town and sample kalakhand, a sweet milk cake which the locals claim was invented here.

The nearest airport is Delhi (140 km) and the nearest railhead is Alwar (12 km).
Kesroli is almost equidistant from the tourist sites of Delhi, Agra and Jaipur.
For bookings contact: reservations@neemranahotels.com