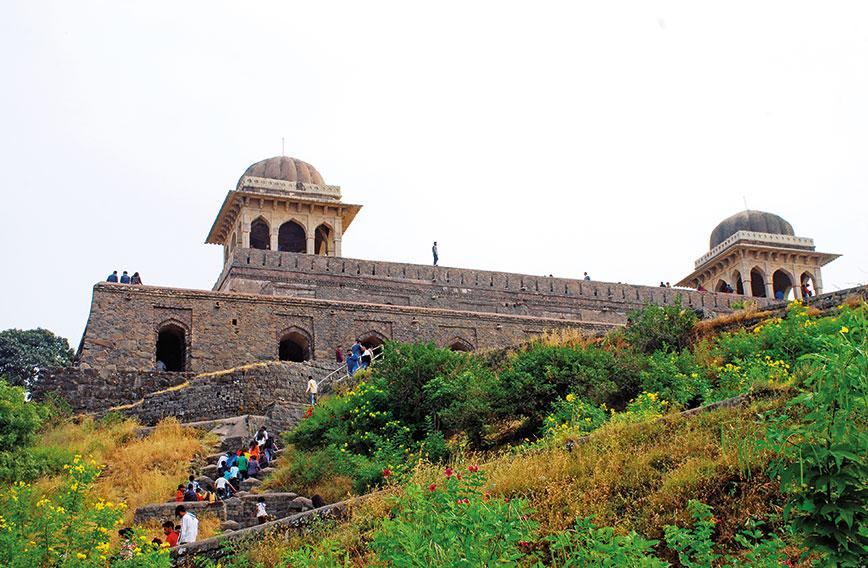 Romance and heritage at Mandu

On a wintry morning, I checked into my tented accommodation in the fort town of Mandu in Madhya Pradesh. I was there to participate in the first edition of the five-day Mandu Festival and rediscover this quaint town with a past, replete with stories of romance and battle, courage and betrayal.

It delved into history, heritage, culinary experiences and romance through Instagrammable locations. Visitors also experienced an adrenaline rush through aero sports activities like hot-air ballooning and gliding. The roads sported a vibrant look with draped flags and festoons, welcome arches, streamers and multi-hued ribbons. The illuminated trees and colourful buntings added to the fervour.

The festival retold the beautiful love story that unfolded between the legendary Baz Bahadur and Roopmati, his beloved, through story-telling sessions. Each monument in Mandu seems to tell a story, adding to its grace. The beauty of the architecture lies in its minimalism. The monuments have been divided into three groups. The first is a group of buildings referred to as the Royal Enclave, then there is the Village Group and the third is the Rewa Kund Group at the south of the Fort. 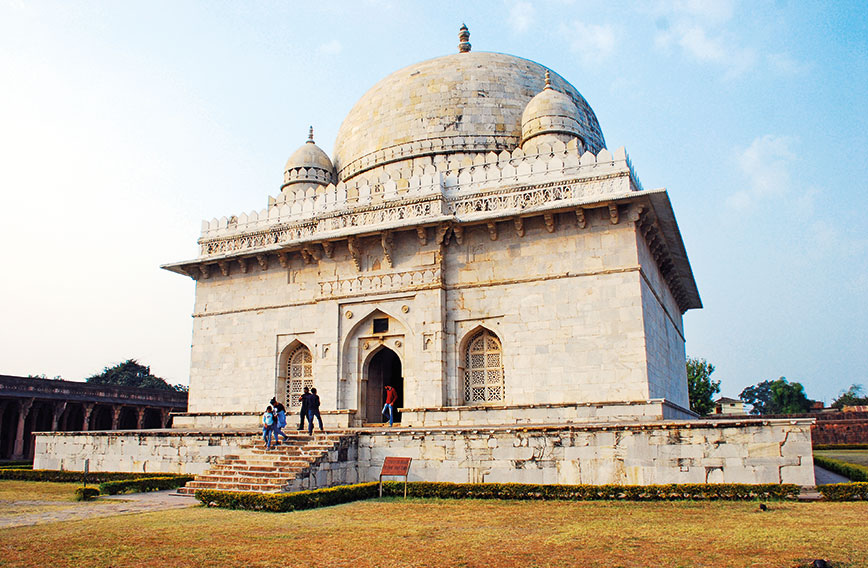 We embarked on our monument-hopping spree with the Village Group where the Jami Masjid, patterned on the great Omayyed Mosque in Damascus, overlooks the village of Mandu. Considered the largest and finest example of Afghan architecture in India, it was begun by Hoshang Shah and completed in 1454. But, in contrast, the imam’s ‘pulpit’ is distinctly Hindu in decoration. Its beautiful courtyard, enclosed by huge colonnades with a variety of arches, pillars, bays and domes, all aesthetically laid out, evoke a sense of grandeur. The vast masjid can seat 5,000 people and its variety of domes are sound-amplifying and echo-absorbing devices so that the frailest voice, speaking from the pulpit, would be heard afar.

Hoshang’s Tomb, located behind the mosque, is one of the first marble edifices of its kind constructed in India. The interior of the tomb, with a well-proportioned central dome, surrounded by four smaller domes, the beautiful lattice work, and its porticos and towers, is overwhelming. Light enters the interior through stone jalis, and falls on the six tombs within. It is no wonder Shah Jahan sent his architects on a recce to Mandu before they designed the Taj Mahal. Yet few know that its architecture is said to have inspired the Taj Mahal. A flight of steps leads to Ashrafi Mahal, another monument in the same group located right across the road from the mosque. Originally built as a madrassa (religious college) by Mahmud Shah, it was later extended to become his tomb.

From there we headed to the sprawling Royal Enclave which flaunts the Jahaz Mahal, or Ship Palace, the most famous palace of Mandu. The palace was built by Ghias-ud-din, son of Mahmud Shah, for his reputed harem of thousands of beautiful women. A beautiful two-storied palace with scalloped arches, airy rooms and beautiful pools, it is flanked on either side by two lakes, adding to its ship-like look. When viewed from afar, its open pavilions, balconies overhanging the water and open terraces are unforgettable on a moonlit night. 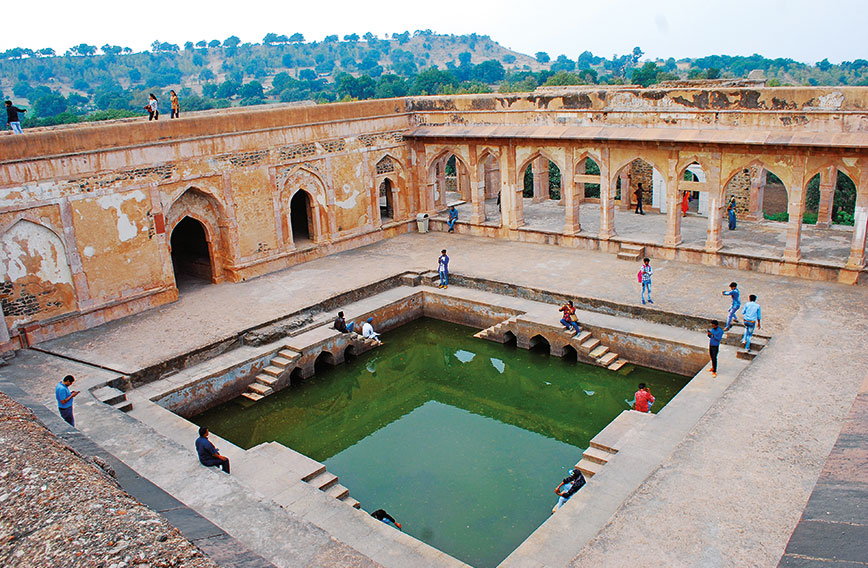 A courtyard with a tank in Baz Bahadur's palace

Next to this star attraction is the Hindola Mahal. Known as the Swing Palace, it has a wide, sloping ramp enabling the ruler to be conveyed upstairs on elephant back. The Hindola Mahal, an audience hall, derives its name of ‘swinging palace’ from its perceptible sloping side walls which give the illusion that it is always swinging.  It is valued for its trellis-worked sandstone and elegant façade. To the west of this palace is the famous Champa Baoli, a step-well with  underground chambers. Adjacent is a hammam with chambers equipped with channels supplying hot and cold water and a steam sauna.

The Rewa Kund group is located about three kilometres south of the village group. Baz Bahadur was the last independent ruler of Mandu, and his palace is located beside Rewa Kund with an underground tank and a water lift which supplied water to the palace. The palace is a blend of Rajasthani and Mughal styles of architecture. While strolling through the long corridors, amidst the numerous pillars and arched entrance, we could sense echoes of a resplendent past.

Roopmati’s Pavilion, located on the crest of a hill, overlooks his magnificent palace, and the balladeers of the region still sing about their love. Originally conceived as an army observatory, it became a look-out point for the lovely queen as Baz Bahadur’s palace was visible from here. Roopmati is said to have been a very beautiful Hindu singer, and Baz Bahadur persuaded her to move to the Fort by building this pavilion from where she could have sweeping views of the fertile Nimar plains with the silvery streak of the Narmada flowing past.

When Emperor Akbar marched to the Fort, Baz Bahadur fled, leaving Roopmati to poison herself. Mandu’s ruins still narrate the tragic end involving Akbar and Baz Bahadur and the suicide of Rani Roopmati to save her chastity. We left with a heavy heart when we heard about the sad and tragic end of this romantic saga but with a promise to return to capture the magic of the Mandu Fest in 2020.