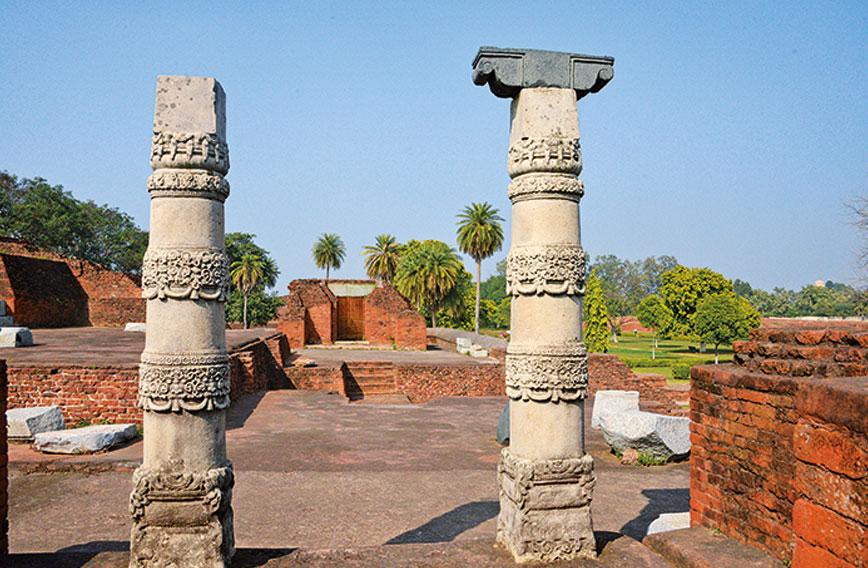 Two marble columns on the terrace of Temple 12

As you wander about the red brick remains of Nalanda, you hear not the sound of trotting hooves or the fanfare of a royal court. It’s not power and glory that the ruins evoke but the depth of ancient India’s learning, of a vast campus humming with eager students, monks many of them, learning and engaging with the brightest minds of the land.

There can’t be too many sites like Nalanda across the world, because there weren’t too many universities back in the ancient world. And few, surely, as big as Nalanda. Sprawling across south Bihar’s nondescript countryside, Nalanda Mahavira, as the university was called, flourished for some 800 years from the fifth century, as perhaps the greatest centre of learning in that age, before it was ransacked by soldiers led by the Turkic chieftain, Bhaktiyar Khilji, in the year 1193.

Nalanda is easily reached from Patna, about 90 km away. Most tourists combine a trip to the ruins with a visit to Rajgir, less than 15 km away, and Bodh Gaya, another 100 km to the southwest. The combined tour forms what is called the ‘Buddhist circuit’. Nalanda was the centre of Buddhist learning. It was at Bodh Gaya, of course, that the Buddha attained enlightenment 2,500 years ago as he sat under a peepul tree, and it was at Rajgir, then capital of the Magadh kingdom, that he preached extensively and whose rulers, Bimbisara and Ajatashatru, revered him and became his followers.

It is in Rajgir, in fact, that most tourists camp when visiting Nalanda. The ancient capital, now a small, unremarkable town with a congested main street, is where most hotels are located. Nestling at the base of a hill range, Rajgir has its own attractions: a park called Venu Van with a prayer enclosure and a lake that King Bimbisara had gifted to the Buddha for his stay; Vulture’s Peak (Gridhakuta), reached by a ropeway, where the Buddha meditated and where stands a giant domed stupa built by a Japanese mission; and the ruins of a snake cult temple called Maniyar Math and rock-cut chambers called Sonbhandar that were supposedly the treasury of the Magadh empire. A great way to do the rounds of Rajgir’s sights is to take a horse-drawn tonga; the ride is fun in itself.

Most tourists head first to Nalanda, some 15 km away. The excavated ruins lie about 300 m off the road and, entering through a leafy path, you face an extended red brick wall, with no hint of the archaeological wealth that lies beyond it. A small unremarkable doorway leads you into a passageway and stepping in, you see on your right a vast complex of roofless rooms, and corridors, on multiple levels. These are the ruins of a monastery, Monastery Number 5. Eleven such monasteries have been unearthed in Nalanda, each comprising several rooms or cells where students, mostly monks, lodged and studied.

Ahead, at the end of the passageway, a second doorway opens up to a vast expanse of ruins, remains of huge red-brick structures, spread across clipped lawns (ASI-maintained) with neatly laid out pathways. Here finally, as you gaze in wonderment, is the campus of the ancient university, extending across a rectangular stretch about half a kilometre long and a quarter across.

Far to the left, at one end of the rectangle, rises a towering giant pyramidal pile with steps leading up to the top; it is a sight familiar from school history books. The most iconic of Nalanda structures, this is the Great Stupa. As you get closer, you notice two tall corner towers beside the giant pile, embellished with panels of stucco Buddhist carvings and a host of votive stupas all around. There are carved panels too on sections of the pyramidal pile.

With wooden barriers installed in 2016, when Nalanda was declared a UNESCO World Heritage Site, tourists cannot now wander around and explore the Stupa; they must content themselves with seeing it from the adjacent pathway. Archaeologists believe Temple Number 3, as they call it, was originally the site of the stupa (reliquary monument) to Sariputra, one of the Buddha’s earliest disciples. A thousand years later, when the university began being established, it was built over as the main temple, and in the centuries that followed, it was successively built upon
and enlarged.

Built upon and enlarged over the centuries also was Monastery Number 1, its ruins occupying one corner of the excavated Nalanda rectangle. It is now a warren of roofless cells where monk-students lodged, and a courtyard on a higher level with
the ruins of a central temple in its centre, a colonnaded (only the column bases remain) hall for lectures (apparently) at one end, and another hall (its roof still intact) with arched doorways. Historians believe Monastery 1 was the oldest and largest monastery in Nalanda and was at least two storeys high.

Some of Nalanda’s other buildings soared much higher. The university’s famous library was housed in three edifices, one of which was nine-storeyed. The Chinese scholar-explorer, Hiuen Tsang (Xuanzang, in the new Chinese spelling), who spent over two years at Nalanda in the seventh century, wrote of “richly adorned towers, and the fairy-like turrets, like pointed hill-tops” in describing the university’s buildings.

Much of what is known about ancient Nalanda, in fact, comes from the writings of Hiuen Tsang and another Chinese traveller, I-Tsing (Yijing), who spent 10 years at the university. Hiuen Tsang was much revered in Nalanda and was asked to teach at the Mahavira but he wasn’t the only foreigner at the university. Nalanda, which at its peak had 10,000 pupils, drew students of Buddhism and philosophy from across southeast and east Asia, and even Persia, Afghanistan and Turkey. Indeed, a king from Sumatra (in modern-day Indonesia) even built a part of Monastery 1.

Monastery 1 is the first in a line of eight contiguous monasteries, built along the eastern side of the Nalanda rectangle. As you visit them one after another, you will find a similarity in layout: a central quadrangle lined on four sides with uniformly-sized rooms. The quads, you will find, all had wells and a set of neat elongated cavities that were apparently ovens. From the evenly spaced pillar base remains all along the sides of the quadrangle, it is evident that a verandah, with roof supported by pillars, ran along the court, onto which the rooms opened. The monastery buildings, as remains of staircases indicate, were at least double-storeyed, with 80 or more rooms.The rooms not only lodged the student-monks but also teachers, though one room on the quad’s far side, facing the entrance, usually housed the monastery’s shrine. 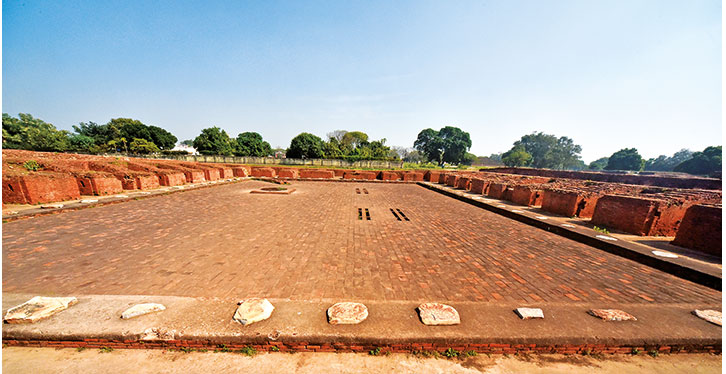 Ruins of a monastery. It used to be lined with cells. A well and oven can be seen in the middle

Opposite the monasteries, and in a line with the Great Stupa, are three huge mound-like ruins: these are the remains of large temples, and typically, you visit them after having finished with the monasteries, starting with the farthest of them, called Temple 14. Not as impressive or towering as Temple 3 (Great Stupa), 14 has a shrine (now bereft of any altar) at the top of its gently rising pyramid, approached by a sweeping staircase.

The most impressive by far of the three big temples is Temple 12. The walls of its vast square base are decorated with a series of panels housing bas-relief Buddhist carvings, and on the terrace, two carved marble columns still stand, marking the entrance of what apparently was a shrine. The western forecourt of the temple is crowded with votive stupas, some beautifully carved, with friezes of the Buddha.

The temples obviously played a central role in Nalanda. Descriptions left behind by the Chinese visitor, I-Tsing, speak of a strictly disciplined life at the university with the student-monks following a series of religious rites that included attending service at the temples each evening. Though founded by the Gupta emperor Kumaragupta (c. 415-455), Nalanda gradually turned into a centre of Buddhist learning, especially during the reign of Harshavardhana (seventh century), who had converted to Buddhism and took great interest in the university, building several additions and regarding himself as a servant of the monks.

Between the eighth and 12th centuries, Nalanda came under the patronage of the Pala kingdom of eastern India, where the reformist Mahayana Buddhism became gradually influenced by the magical Tantric cult to transform into what is called Vajrayana Buddhism. Nalanda, which over the centuries had emerged as the principal seat of Mahayana philosophy, embraced Vajrayana too, and many of its monk-scholars, among them Atisha and Santarakshita, travelled to the lofty plateau of Tibet, on the invitation of its kings, to help establish Vajrayana Buddhism there.

But Buddhism wasn’t all that was taught at Nalanda. Grammar, logic, literature, mathematics, astronomy, medicine and astrology were all taught. Its famed library contained tens of thousands of manuscripts and texts on all these subjects, and it is said it took three months for it all to burn when Nalanda was ransacked in 1193.

Khilji and his soldiers initially thought Nalanda was a fortress but after killing all the “clean-shaven Brahmans”, discovered a “great number of books”, according to one account, and only then realised it was a “college”. Nalanda did revive a bit, according to a Tibetan pilgrim visiting in the 13th century, after Khilji’s pillage, but only for a short while, dying out eventually with the decline of Buddhism in eastern India, and it wasn’t until 1847 that it was heard of again. That year, the archaeologist Major Markham Kittoe (who also excavated Sarnath) identified the mounds that surveyor Francis Buchanan had 36 years earlier reported on, as those of Nalanda, the ancient university mentioned in historical accounts.

The Nalanda site was subsequently surveyed in 1861-62 by Alexander Cunningham, the doyen of 19th century colonial archaeology, but it wasn’t until 1916 that the Archaeological Survey of India (ASI) began  excavating the mounds, the work continuing till 1937 and being taken up again over 1974-82. As the ruins were uncovered, many statues of the Buddha and other Buddhist and Hindu divinities were unearthed, and most of these are today exhibited at the small Nalanda Museum, just across the road from the ruins.

Leave an hour for the museum and you can complete your tour of Nalanda by visiting the Xuanzang (Hiuen Tsang) Memorial. Opened in 2007, it is situated about a kilometre from the Nalanda ruins, beside a shimmering lake. Built in Chinese pagoda style, the memorial’s cavernous hall is presided over by an imposing seated statue of the pilgrim-scholar with panels narrating the amazing story of his travels in the seventh century from China to Nalanda (and elsewhere in India), to acquire greater knowledge of Buddhist philosophy, especially of the Yogacara school.

After the memorial, as you head back to your Rajgir hotel, it’s the unbelievable story of Hiuen Tsang’s 17-year odyssey — from China, through the Gobi desert, through Central Asia and Afghanistan, to India, surviving robbers, not to mention extreme terrain and climate — that will probably keep coming back to your mind. And the wonder that there once was a university in India that could inspire scholars to undertake such rigours to reach its hallowed portals.