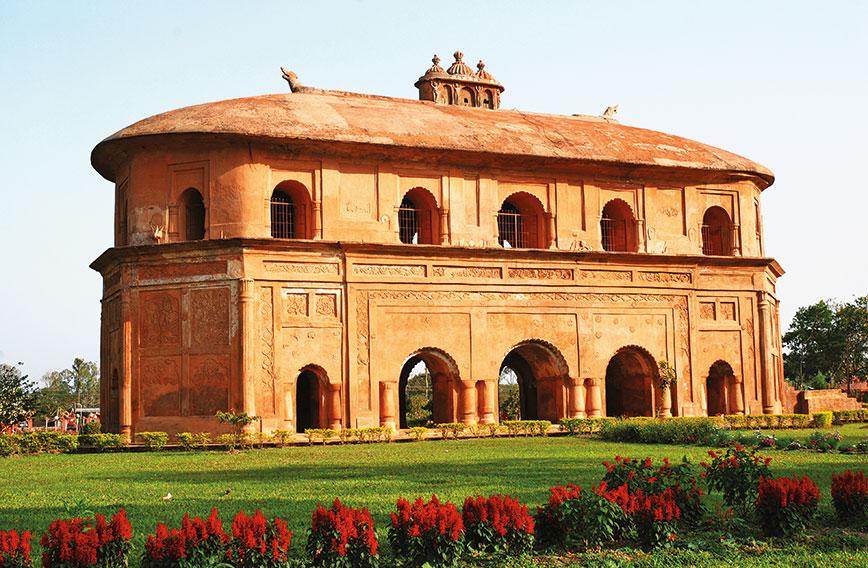 Rang Ghar, the royal amphitheatre from the Ahom days

AS we rambled through Sibsagar, the heartland of the Ahom kingdom in Assam, we felt as though we were in a town in Rajasthan, so similar was the brick façade. It did not resemble an Assamese town though it was ruled by the Ahom kings for nearly 600 years till the British annexed the region in 1826.

Originally a Burmese Shan tribe, the Ahoms are believed to have repulsed 17 Mughal invasions, including one by Aurangzeb in the mid-17th century. It is said that the Ahoms had sought the help of the British to ward off an attack by the Burmese. Instead, the British took over their territory.

The Ahom rulers departed, leaving the town studded with stunning monuments, temples and man-made lakes that are a glorious reminder of the region’s unique history.

Those structures stand testimony to the excellent architectural skills and craftsmanship of that era. As a tribe engaged in constant skirmishes, it is interesting to note the architectural programmes of the Ahoms. They had their own techniques of making very thin but hard bricks and preparing durable plaster with materials such as molasses, sticky rice, eggs, fish, lime and resin for construction. It is amazing how the Ahom kings built earthquake-proof structures more than 400 years ago, cemented by a paste of rice and eggs. The kings had obviously taken all precautions in this earthquake-prone region!

We started our sightseeing trip with the 129-acre Sibsagar Tank, after which the old Rangpur town was rechristened. Besides Sibsagar Tank, King Shiva Singha and his wife, Queen Madambika, had built three temples — Shivadol, Devidol and Vishnudol. The water level in the tank is always higher than the level of the surrounding town — an engineering marvel!

The most striking temple in Sibsagar is the Shivadol temple, built beside the tranquil Sibsagar Tank in 1733. The highlight of this temple is its gold-plated apex, 1.5 m high, accompanied by four smaller shikharas with tridents. It is one of the tallest Shiva temples in the country, rising 37 m. The temple walls are stark red brick with the trident as the lone symbol.

Shivadol is believed to have one of the highest domes among all Shiva temples in the country. It is built in the dwaikuta style which consists of two cells, a ‘garbha griha’ and a ‘mandapa’. Above the garbha griha rises a shikara with fluted vertical lines. Devidol or the Devi temple is similar. An unusual feature of the Vishnudol, dedicated to Vishnu, is the Shiva lingam in its sanctum sanctorum.

About 6 km from Sibsagar Tank is a seven-storied palace known as the Talatal Ghar or the palace with underground cellars. It has two secret tunnels leading to the Karang Ghar or the Gargaon Palace, 13 km east of Sibsagar. This enabled the Ahom kings to give their enemies the slip. The floors above the ground are called ‘Karang Ghar’ and that underground ‘Talatal Ghar’. The Talatal Ghar is connected by two tunnel pathways to the Dikhow river, presumably to bring water to the palace, and the Gargaon Palace, respectively. 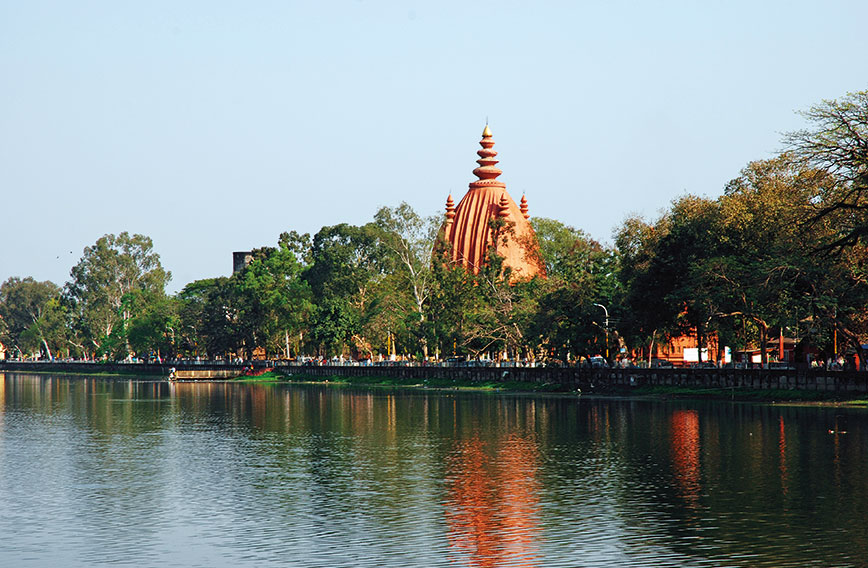 Shivadol on the banks of the Sibsagar Tank

Equally interesting is a set of temples built in an earlier period during the reign of Rudra Singha (1696-1713). Located on the shore of the Joysagar lake, spread over 318 acres on the edge of Sibsagar town, are four temples — Joydol, Shivdol, Devidol and Ghanshyam, dedicated to Lord Krishna.

The most well-known of these is Joydol. It has the typical Ahom architectural stamp — a dome culminating in an apex supported by circular spirals with diminishing circumference. The walls of the temple have interesting frescoes — of dancing maidens, of animals and of courtly life though not as rivetting as the sculptures in Khajuraho. Gaurisagar is yet another pond worth visiting. It was constructed by Queen Phuleswari. The 150-acre pond has three temples alongside, dedicated to Gauri, Shiva and Vishnu.

About 13 km east of Sibsagar lies the Gargaon Palace built by the 15th Ahom king, Suklenmung, in 1540. The original building was destroyed later and the present structure was built by King Rajeshware Singha around 1762. Rising tier upon tier like an immense, square birthday cake, this brick palace is set on a grassy mound and is surrounded by vast open spaces.

Yet another impressive landmark of Sibsagar is the dargah of Ajan at the confluence of the Dikhow and Brahmaputra rivers. The dargah is known as Hoccaguri Chapori and is visited by Hindus and Muslims alike. Ajan, whose name is derived from azan or prayer, originally came from Baghdad. He was blinded by the then ruler who suspected Ajan of being a Mughal spy. But Ajan stayed on in Sibsagar, learnt the local language, steeped himself in religion, and composed songs which are sung to this day. We culminated our one-day trip with a visit to Rang Ghar, the royal amphitheatre from the Ahom days and a signature structure of Assam. It looked like a colosseum. The two-storied oval-shaped pavilion was built by King Pramatta Singha, son of Rudra Singha. Ahom royalty viewed elephant and buffalo fights from this vantage point. It is surrounded by a wide meadow, where the commoners gathered. Perhaps one of the earliest pavilions of outdoor stadia in India, it is 10 m high, 11 m wide and 27 m long. The base of the monument has a series of arched entrances and atop the roof is a decorative pair of carved stone crocodiles. Having viewed temples, palaces, monuments and man-made lakes, we returned wonderstruck by Sibsagar’s archaeological wonders.