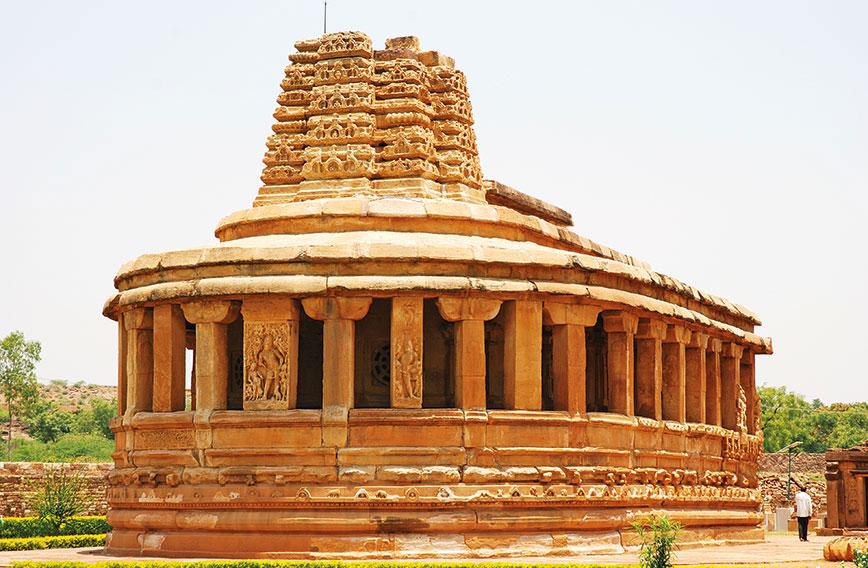 The splendid Durga temple in Aihole

AFTER a heritage sojourn to Badami and Pattadakal, I stopped by the picturesque village of Aihole on the bank of the Malaprabha river in Bagalkot district. The first capital of the early Chalukyan dynasty, Aihole has been hailed as the ‘cradle of Indian temple architecture’. Originally named Aryapura, Aihole was a university town that patronized art, culture and education. The temples are associated with both the early and later Chalukyas, rulers of Badami.

I started my exploration spree in Aihole by wandering at leisure through the fields and rocky outcrops. Strolling around the hamlet, I reached a fenced enclosure peppered with clusters of temples in the centre of the village. I found their names intriguing as they derive from the temporary inhabitants in recent times, rather than the divinities worshipped there.

The most striking one in this cluster is the sculpturally splendid Durga temple, remarkable for its semi-circular apse, elevated plinth, basement friezes and a gallery encircling the sanctum. The temple, resembling a Buddhist chaitya with a horseshoe-shaped structure, is said to be the only one of its kind in South India. It reminded me of the present-day Parliament House (constructed in the 19th century), which is inspired by this 7th-8th century temple. The name of the shrine is ambiguous: it refers not to Goddess Durga but to the fact that it once served as a defensive outpost (durg).

I was awed by its unusual shape, the carvings of scenes from the Ramayana gracing its walls and ceilings and the basement friezes with ganas (mythical comical dwarfs), foliage, and full-length niche deities. Among the main figures who appear on the walls are Shiva, Vishnu, Narasimha and Durga. But the carving of Mahishasuramardini, trampling the buffalo demon, is the most striking. The adjacent sculptural gallery, maintained by the Archaeological Survey of India (ASI), houses Chalukyan sculptures.

The Lad Khan temple, which is one of the earliest temples, was the next stop on our monument-hopping spree. It was originally a royal assembly hall and marriage mantapa chosen as the abode of a Muslim noble, Lad Khan. The river goddesses, Ganga and Yamuna, popular icons of the fourth-century Gupta dynasty, herald a welcome at the entrance. Couples embracing beneath trees are carved on the outer columns of the porch. I did not attempt to scale the stone ladder leading to the roof shrine with images of Surya, Vishnu and Shiva carved on its walls. Over the cells at the back is a square, flat-roofed superstructure, in effect forming a two-storey sanctum. Two other temples, Gaudhar Gudi and Chikki Gudi (both dedicated to Shiva), within the complex belong to the same age.

I then reached the Kunti Group, another interesting ensemble of temples, after a short ramble down the streets of Aihole. This quartet of temples, dating from different periods, consists of partly open halls with sloping roofs and overhanging eaves. Each temple has a small sanctuary positioned against the rear wall. The external columns of the mandapa are decorated with erotic couples. The northwest temple also has sculpted figures. The interior is pepped up with three finely carved ceiling panels of Shiva with Parvati, Vishnu on the serpent and Brahma on the lotus. Guardians flank the doorway. The two remaining structures are from the Rashtrakuta era, as is evident from the columns, which have squat proportions and triangular panels of lotus decoration. A free-standing portal with animal brackets links the two north temples.

Beyond these temples and the houses of the town, farther south is the Hucchappayya Matha. It has sculptures of amorous couples, with beautifully decorated beams inside and a hall roofed with ceiling panels depicting the same trio of divinities noted in the Kunti Group.

Another imposing monument is the Ravalaphadi (or Ravanaphadi) cave temple, Aihole’s only excavated temple which celebrates the many forms of Shiva. I gazed in admiration at the ceiling, delicately carved with decorative motifs. At the entrance, I saw life-size sculptures of Ardhanariswara and Harihara and inside, the Saptamatrikas (fertility goddesses). To the left of the entrance of the cave is an enormous carving of Shiva, with his consort, Parvati. The sanctuary holds a huge lingam, and carved lotus motifs in the centre of the floor and ceiling. Don’t miss the Huchimalli temple with a sculpture of Vishnu atop a large cobra.

Before reaching a hilltop, I passed by a Buddhist temple. Its desolation was highlighted by bats who occasionally swarm into flight under a ceiling graven with the image of the Enlightened One. It has a serene, smiling Buddha seated under a Bodhi tree.

From the Buddhist temple, a path leads to the Jain Meguti (or hilltop) temple, from where I had fine views of Aihole, the Malaprabha Valley and the surrounding countryside from the first floor. The roof is still standing over the remains of the austere Jain Meguti temple and covers the sanctum within which Mahavira sits, serene in perpetuity. The temple affords a view of the sleepy village below. It is known for its inscriptions by the renowned poet, Ravikirthi, who built the structure in AD 634. Built on an elevated platform, it has two sanctums, a court hall and a portico.

Teeming with Hindu and Jain and rock-cut temples, it is little wonder Aihole is known as the birthplace of Dravidian temple architecture. Compared to the opulence of Hindu temple craft, we found the Jain and Buddhist temples here austere.

Getting there: 46 km from Badami in Bagalkot district of Karnataka.

When to go: October to March.

Tips: Make Badami your base. It has a range of hotels and a host of transport options to travel to nearby places. It is advisable to hire a taxi for a day trip covering Badami, Aihole, Pattadakal, Banashankari and Mahakuta.