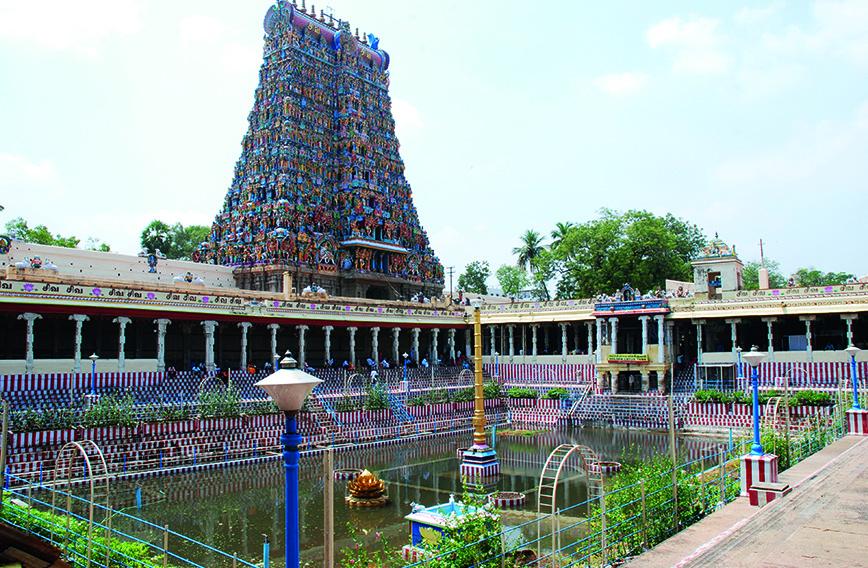 Temple with a tank and a towering gopuram

A cathedral in Madurai! Not just temples

As I approached the temple town of Madurai, the  lofty  gopuras  of  the  Meenakshi Sundareswarar temple loomed into view in the distance. The temple is best seen at twilight when its lamp-lit halls and corridors acquire an air of quiet sanctity. I spent endless hours gazing at the tall towers with gold-plated vimanam, the musical pillars, the 1,000-pillared hall, yali sculptures with stone balls rolling in their gaping mouths, the 470-carat diamond crown of the goddess and the priceless exhibits in the Temple Museum.

Ambling around the pillared corridors surrounding the historical golden lotus temple tank, I marvelled at the architectural splendour of this temple. After the temple visit, I browsed through the exhibits relating to Tamil culture, featuring outstanding bronzes, in the Temple Museum.

Outside the temple area, across from the east gate, is another architectural marvel, the Pudhu Mandapam, a large rectangular hall supported by 124 intricately carved pillars. It was built in 1623-45 by Tirumalai Nayak, and is also known as Tirumalai’s Choultry. Built for Sundareshwar, it is said that the god appeared in the hall for 10 days each year, seated on the pedestal installed for him. His sojourn took place in the spring, which explains the hall’s third name, the Vasantha Mandapam. Ten of the hall’s columns are carved to represent life-size members of the Nayak dynasty; the canopied figure denotes Tirumalai.

The Tirumalai Nayak Palace is equally impressive. Its most striking feature is a courtyard surrounded by galleries supported by massive columns and ornamental arches. Built circa 1636 in the Indo-Mughal style, its 15 domes and arches are adorned with stucco work while some of its 240 columns rise to 12 metres. The Swarga Vilasam (Celestial Pavilion) is a rectangular courtyard, flanked by 18-metre -high colonnades and an arcaded octagonal structure, and is constructed in brick and mortar without any supporting rafters. The original complex had a shrine, an armoury, a theatre, royal quarters, a royal bandstand, a pond and a garden but only a quarter of all this survives. The original Ranga Vilasam was destroyed by Muslim invaders. Sound and light shows organized in the courtyard unfold the glorious period of the Nayaks in Madurai’s history.

Yet another Nayakar legacy is the Vandiyur Mariamman Teppakulam, an enormous tank where the great Ganesha in the Meenakshi temple was found during the excavation to provide bricks for the Tirumalai Nayak Palace. At the centre of the tank is a small temple to Mariamman, a manifestation of Shakti. It was once full with a constant supply of water through underground conduits connected to the Vaigai river. The spectacular Teppa floating festival held here annually is a sight to behold when idols of Meenakshi and Sundareshwar are taken on highly decorated and illuminated floats in the gentle waters of the tank to the romantic pavilion in the centre of the island in the tank.

Proceeding to the southern outskirts of the city was a welcome respite from the frenzy of Madurai. I reached the Pandiyan rock-cut shrines of the eighth century, and the much later Nayak Hindu temple at Tiruparankunram with a wide range of Hindu gods carved on its walls. The Subramanya cave temple has a shrine dedicated to Durga, with the figures of Ganesh and Subramanya on either side. Other carvings show Shiva dancing on a dwarf on the right-hand side and Parvati and Nandi with musicians on the left. Its temple, built around an eighth -century shrine cut into the rock 35 metres above the town’s rooftops, comprises a series of huge terraces and halls. A 20-km detour from Madurai took me to the ancient Alagar Temple located on a hill in the forest. Two forts surround the massive temple complex, the outer Azhagapuri and the inner Hiranyapuri. Its Anna Vahana Mandapam has beautiful sculptures depicting mythical scenes.

When temple fatigue set in, I visited St Mary’s Cathedral, the second biggest cathedral in Tamil Nadu. Built in 1795, it is a spectacular example of French and Gothic architecture. The façade of the church is an amalgam of various forms of European and Continental styles.

A trip to Madurai is not complete without a visit to the Gandhi Memorial Museum housed in the old palace of Rani Mangamma of the Nayak dynasty. During British rule it was known as Tamukkam Bungalow, and occupied by successive district collectors of Madras. In 1955, it was taken over by the government and now displays vignettes of Gandhi’s life and work. It charts the history of the independence struggle from 1800, and the Quit India movement.

We came across a reference collection of 15,000 books, periodicals, letters and microfilm material relating to Gandhi. It also houses an art gallery and offers an overview of the Mahatma’s life through paintings and a variety of memorabilia. Some of his minimal personal belongings are preserved here. This includes a replica of his bed and other furniture but what catches the eye is a model of the hut in which Gandhi lived in Sewagram. It has other interesting displays, including the cloth that the Mahatma was wearing when he was shot (the blood stains can still be seen).

We visited the streets famous for the bright tie-and-dyed cotton Sungudi saris and we looked for golu dolls – idols of gods and goddesses – at the temple’s curio shops. The flower market is a riot of colour and fragrance. We also passed huge mounds of the famous Madurai malli (jasmine).

The range of eateries in Madurai is interestingly varied. We stopped by Murugans’ Idlis and relished the legendary ‘soft-as-jasmine idlis’ served with spicy chutney accompaniments and rounded off with scalding-hot filter coffee. We culminated our culinary jaunt with jigarthanda, a famed cool drink of Madurai.

Air: Madurai airport is 10 km from the city.

Rail: Madurai Junction is connected to all big cities.