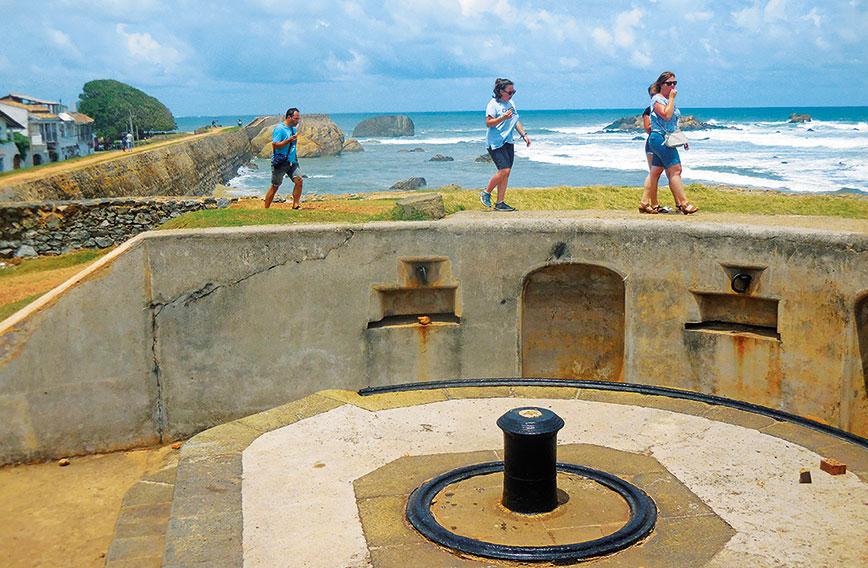 Strolling down the ramparts of the Galle fort

Galle's great for its colonial past

It was noon when we sauntered into the cobbled streets of Galle, a UNESCO World Heritage Site on the southwest coast of Sri Lanka. As we ambled leisurely around its meandering streets, we tarried awhile to admire the restored architecture of colonial buildings, ancient mosques and quaint churches, grand mansions and museums. Strolling down the streets we got a full perspective of the place — of the town inside the walls and the Indian Ocean on the other side. We gazed in admiration at the grand warehouses and palatial residences built during Dutch rule.

The place resonates with history and abounds in landmarks, including the town’s natural harbour, the lighthouse, the National Maritime Museum, St Mary’s Cathedral, founded by Jesuit priests, a Shiva temple, Amangalla, the historical luxury hotel, and the Meeran Jamma Masjid, a Dutch-era mosque with subtle Dutch architectural touches. The landscape transported us to the glorious past, to a time when Galle was a busy outpost for the spice trade, enticing voyagers, explorers, seafarers and traders for centuries from the remote corners of the world. It was featured in Ptolemy’s world map and also visited by Ibn Batuta.

Claimed to be the largest fort in Asia built by European colonisers, Galle’s tryst with colonial powers began with the Portuguese who constructed the iconic Galle Fort in 1588. It was first built of mud and palisades by the Portuguese. By 1640, the Dutch had fortified it. The Dutch evicted the Portuguese in the 17th century and made Galle their own. They fortified the town in their distinctive architectural style and large parts of it are still frozen in time. By the late 17th century, as the Union Jack unfurled across Asia, the fort passed into British hands and remained their headquarters until Sri Lanka achieved independence in 1948.

The walled city is surrounded by thick ramparts. You can walk alongside — start at one end and finish at the other. You can hang out at the beach, see the old prison between the ramparts and the waves, check out the lighthouse and clock tower, watch schoolchildren play cricket and the local lads take a plunge into the ocean from  the ancient citadel.

We entered Galle Fort through the main gate overlooking the cricket stadium around 250 metres from the railway and bus stations. We started with the Dutch Reformed Church which is one of the oldest places of worship for Protestants in Sri Lanka. Originally built with stone from the Dutch cemeteries, its other impressive features include a pipe organ with manual bellows and an imposing pulpit made from calamander wood, topped by a grand hexagonal canopy. 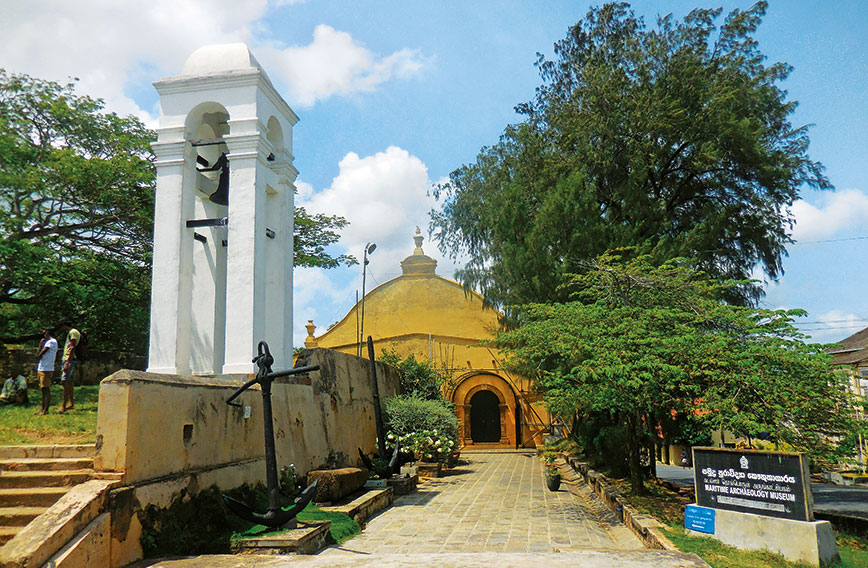 The building dates from 1752. Its floor is lined with gravestones of Dutch citizens while the finely carved pulpit and pipe organ with manual bellows sit alongside various wall tablets recording the lives of later British settlers. It is said that there are underground tunnels running from the church to the Governor’s House. Equally impressive is the All Saints Anglican Church, an imposing Victorian Gothic structure with striking exteriors, multiple arches and a turret. It boasts impressive stained glass windows, beautifully carved timber arches and pews of Burma teak.

From there we headed to the Maritime Archaeological Museum housed in the old, sprawling Dutch warehouse, one of Galle’s biggest and most eye-catching colonial buildings in the fort. Perhaps this is the only museum which showcases the marine biological and anthropological aspects of the southern coast of Sri Lanka. It basically exhibits the marine artefacts found during underwater expeditions. We saw a collection of boat models, maps and other things retrieved from centuries of shipwrecks. The traditional lifestyle of fishing communities and their various techniques are also on display. An introductory video presentation sets the scene and there are interactive displays that illuminate the city’s maritime past, including the many shipwrecks in Galle’s surrounding waters.

A part of this museum is dedicated to the display of the marine ecosystem and its varied flora and fauna, including some amazing finds. We spotted models of mangroves, seashore plants, turtles, seabirds and a wide range of marine mammals. Some specimens of corals and marine shells can also be found here. It is the perfect place to learn about Sri Lankan fishing boats, the visiting merchants and the colonial powers. The warehouse building in itself deserves a visit! The numerous wrecks on the coast of Sri Lanka have provided some great finds. A large skeleton of a whale mounted on the roof is an altogether mesmerising experience.

Built in Dutch colonial style, Fort National Museum is a one-storied building located next to Amangalla Hotel. Housed in the oldest Dutch building inside Galle Fort, the museum has three galleries that provide an insight into the origin, cultural beliefs, social and physical developments of native Sri Lankans over centuries. The first gallery has an interesting collection of turtle shell jewelry, Beeralu lace weaving and the most popular exhibit, traditional wooden mask carving. The second gallery houses ancient Dutch furniture, East India Co. VOC weapons and porcelain. The third gallery, called Sri Lanka-China Friendship Gallery, has archaeological artefacts from Sri Lanka and China trade alliances. Don’t miss seeing the clock. It dates back to the 1700s and is made from coconut shell. We ended our heritage walk with scouting for souvenirs to take home and found plenty of knick-knacks and antiques in every shop. n

SriLankan Airlines operates regular flights from major Indian cities to Colombo. Galle is a two-hour drive from the bustling city of Colombo.

What to buy: Gems, stones, masks, and other knick-knacks.

Tips: Have lunch at Fortaleza Restaurant, converted from a warehouse for spices, and afternoon tea with scones at Amangalla Hotel.