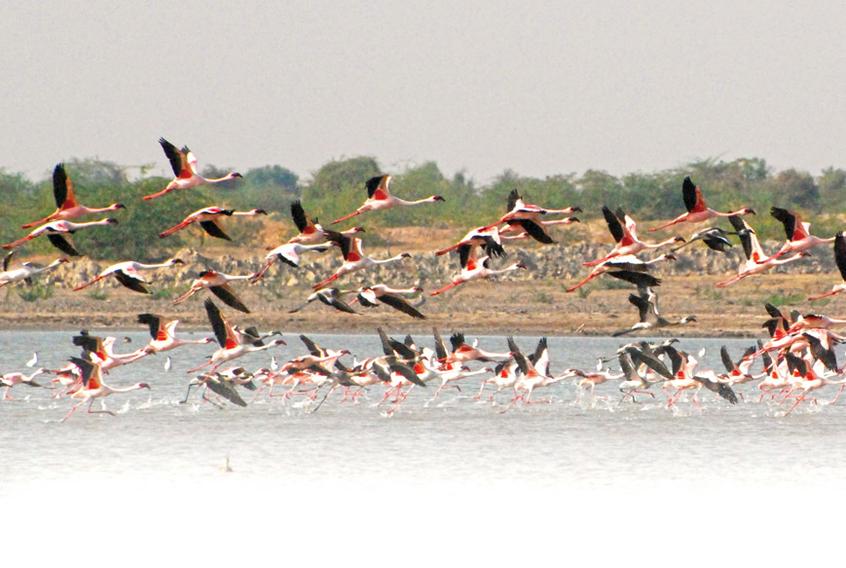 Little Rann of Kutch is teeming with wildlife

It was twilight when we checked into Rann Riders, an ideal base to explore the Little Rann of Kutch, a wildlife sanctuary in Gujarat. Located amid agricultural fields and wetlands, near the hamlet of Dasada, Rann Riders is an ethnic eco-resort built in Kutchi village style, using locally sourced materials and crafts of the region.

Sprawled over 4,953 sq km in the five districts of Surendranagar, Banaskantha, Patan, Kutch and Rajkot, the Little Rann of Kutch is the largest sanctuary in India and has the added advantage of being recognised as a Ramsar Site.

We were ushered into our cottages resembling the bhungas of the Rabaris of Kutch. Each cottage is circular in design, made of mud paste, dung and twigs, and has a dome-shaped bamboo-and-thatch roof. A traditional carved wooden door marks the entrance to the hut. The use of intricate arts and crafts is very obvious as soon as one steps into the room. The walls are decorated with inlaid mirror work and paintings. The interiors are a medley of traditional décor and modern comfort. As Aditya Roy, managing director of Rann Resort, shepherded us around,  he showed us the cottage where Hindi film actor Amitabh Bachchan stayed during the filming of a commercial promoting tourism in Gujarat.

Shivering with cold, we set out at the crack of dawn the next day for a jeep ride into the Little Rann of Kutch, famous as the world’s last refuge of the endangered Indian wild ass. The territory of the wild ass once extended from western India through Sindh, Baluchistan and Afghanistan to southeastern Iran. Currently, the animal’s last refuge is in and around the Little Rann of Kutch.

Locally known as khur, the wild ass looks elegant and majestic with its dark mane running from the back of its head to the neck. It has dark brown stripes stretching from its back to the tip of its tail. The chestnut brown wild ass is powerful, capable of running at an average speed of 50 kmph for long distances. The Little Rann of Kutch was declared a Wild Ass Sanctuary for the conservation of these magnificent creatures. The animal survives off the flat, grass-covered expanses or islands known as bets, which rise up to around three metres. The Little Rann was established in 1973, at a time when the wild ass was in danger. Thanks to conservation efforts, its number has increased from 362 in 1963 to more than 3,000 now.

As we drove through the flat, cracked and absolutely barren land, salt mounds greeted the eye in every direction. For miles there was nothing but a huge expanse of saline desert, a wilderness interspersed with a little grass, scrubland and marshes. It is mostly silent except where animals or birds congregate, or where the pickaxe pierces through hardened hills of industrial salt.

This bleak landscape is surprisingly rich in biodiversity and is an ecologically important area for wildlife. Apart from the wild ass, we spotted a nilgai which sprinted away on seeing us. If you are lucky, you will also see other mammals which reside here. They include desert foxes, jackals, wild boar, jungle cats, desert cats, blackbuck, Indian wolves, Indian gazelle, and striped hyenas. While the wild ass is  easily seen, the other 32 mammals are rarely spotted.

During the monsoon, water envelopes the area. It dries up in winter, converting the land into salt-encrusted parched earth with shallow lakes and small islands, the bets which attract a myriad of birdlife. The Little Rann of Kutch supports a profusion of local and migratory waterbirds like cranes, ducks, pelicans, flamingoes and land birds like sandgrouse, francolins and the Indian bustard.

After an arduous drive we reached Bajana Creek where we were treated to the fascinating sight of thousands of flamingoes in the distance. They remained unperturbed but, as we ventured closer to the water, our feet sank in the mud and they took off in spectacular unison.

Demoiselle and common cranes, greater and lesser flamingoes, several species of duck, pelicans and storks also flock to this creek and adjacent areas. During winter, migratory birds from as far as Siberia congregate at watering holes like the Bajana Creek and over 380 species of birds have been recorded in and around the Little Rann of Kutch. The common and demoiselle cranes arrive from Siberia and the blue-tailed bee-eater visits from Europe. Also present are 10 species of lark, Indian coursers, three types of ibis, stone plovers, shrikes and moorhens.

We came across some agariyas (salt pan workers) living in the arid and harsh land of the Little Rann. We spotted them in the middle of the Rann, surrounded by mounds of white salt crystals. The area is punctuated by desolate salt farms, scattered encampments where people make a living by pumping up ground water and extracting the salt for a paltry sum. The sanctuary faces the threat of illegal salt mining, the emergence of chemical factories, and noise and air pollution caused by transportation of salt. But salt production is the only livelihood option for agariyas despite the health hazards they face.

Fact File
When to go: The sanctuary is open round the year but the best time to visit is from October to March. The best sightings are from November to February when it is cooler and migratory birds arrive in thousands.
Contact:  Wildlife/Forest Department
Phone: 02757- 280257
Distance: 129 km from Ahmedabad
Where to stay: Rann Riders
Phone: 02757-280257, 09925236014