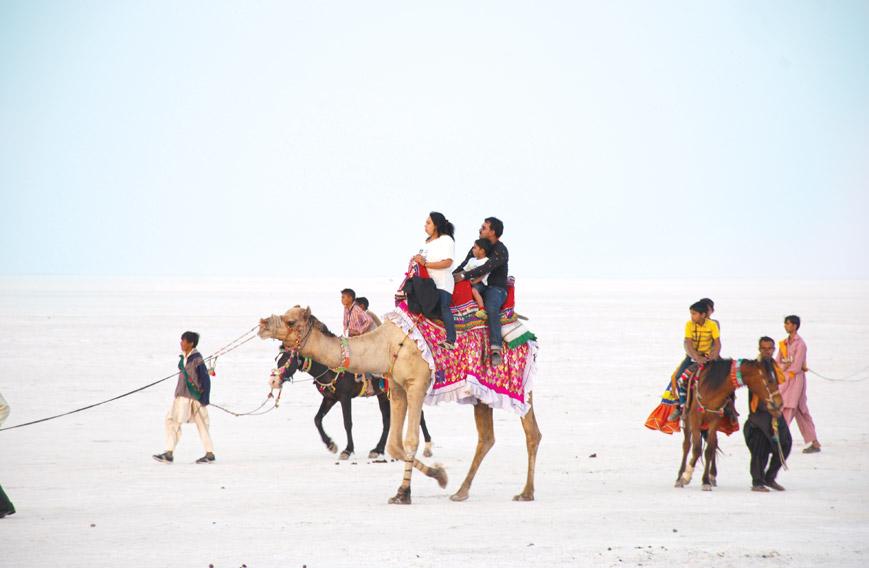 The many colours of the Rann and its Utsav

Dawn was breaking when we walked on the crusty Great Rann of Kutch and the crumbling underfoot added to the magical experience of watching the sunrise. The Great Rann stretches for miles, from Kutch district in Gujarat to Sindh province in Pakistan. That morning we seemed to have the entire Rann to ourselves. But there was a nip in the air and we shivered.

On full moon nights in winter the Rann glitters with encrusted salt. It is a surreal sight and tourists arrive in droves to watch the glorious sunset. The Rann springs to life with vendors, traditional musicians and camels ferrying guests from the entry.

During the monsoon the Rann changes colour. Its landscape is flooded first by seawater and then by fresh riverwater. We were indeed fortunate to be there to see this geographical phenomenon. The ocean recedes once the monsoon is over and the Rann is blanketed by crystals of salt.

In the dry season, the Rann becomes a vast expanse of hard, dried mud. The salt in the soil makes the low-lying marsh almost barren. Standing in the salty desert, I remembered Amitabh Bachchan, Gujarat’s tourism ambassador, strutting around the white desert and intoning the catchy tagline, ‘Kutch nahin dekha, toh kuch nahin dekha,’ in his trademark baritone.

We returned to our luxury tents at Dhordo village. The Tent City springs up only during the winter or during the Rann Utsav, a three-month carnival that showcases Kutchi culture and handicrafts. This tiny village appeared on the tourist map thanks to the vision of Gulbeg Miyan. A chance meeting with Narendra Modi 30 years ago gave him the opportunity to put forward his idea of hosting a festival in the village. It would help villagers earn an income and promote their native arts.

His son, now the village sarpanch, has taken it upon himself to promote the Rann Utsav. The indigenous art and crafts sold at the festival is bringing progress to this remote village.

The Tent City is aesthetically pleasing. It is dotted with colourful tents, street lamps with straw bins as lampshades and traditional bhunga structures (spherical mud huts with conical thatched roofs). The tents resemble the traditional dwellings of villagers near the Great Rann of Kutch and are perfectly designed for hot, arid summers and freezing cold winters. All the luxury tents have air-conditioning and an attached bathroom with running water.

Some highlights of the Tent City are the rows of food and handicraft stalls which spring up during the Rann Utsav. It’s a veritable shoppers’ haven with an ensemble of exquisite hand embroidered and block-printed fabrics, embroidered leather footwear, wood carvings, copper cow bells, paintings and textiles which glitter with exquisite embroidery and mirror work.

The next morning we headed to Kala Dungar, the highest point in Kutch. The journey to Kala Dungar is as scenic as the peak itself. The observation deck at Kala Dungar offers an amazing, panoramic view. The White Desert from up there looks like a huge river of milk. On a clear day, you will also spot a bridge, known as the India Bridge, beyond which lies Pakistan. 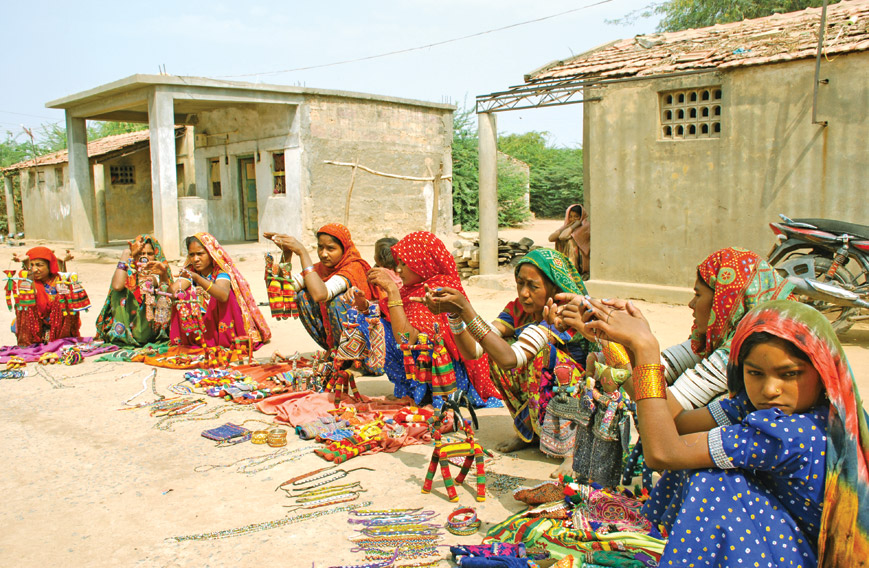 Women artisans from nearby villages sell a range of artistic stuff

We visited the ancient Dattatreya Temple at noon but, unfortunately, missed a most unusual sight. Apparently, a group of hungry jackals makes its way to a raised platform near the temple, where the temple priest offers a prasad made of rice, dal and jaggery. The practice of feeding the jackals goes back 400 years.

According to legend, when Dattatreya walked on the earth, he stopped at the Black Hills and found a band of starving jackals. Being a god, he offered them his body to eat and as they ate, his body continually regenerated itself. Because of this, for the past four centuries, the priest at the temple has been preparing a meal of prasad that is fed to the jackals after the aarti.

From Dattatreya Temple  we headed to the neighbouring hamlet of Nirona to  see how artisans work and sell their exquisite crafts like wood carvings, metal wind bells and flutes, wooden toys, metal-craft,  shell-work variety of weaving, patchwork and other ethnic styles of embroidery, and pottery. When a group of women saw us, they squatted on the street to peddle beaded chains, dazzling earrings, embroidered bags,  puppets and colourful flutes.

What impressed me most was the local Rogan Art. It is more than 400 years old and has made its way to the White House in the form of a gift to President Barack Obama from Prime Minister Narendra Modi. Exclusive to this village in Kutch, these paintings have a lot of Persian influence. A Khatri Muslim family based in Nirona started this art. While returning from the Kutch region, I wondered if Kutchi women artisans infused and embellished energetic colours in their handicrafts and clothes to compensate for the lack of colour in their stark and arid landscape.

How to reach: Bhuj is the nearest town (80 km) and has a few flights from Mumbai. A better option is to fly to Ahmedabad and take a train or travel by road to Bhuj.

What to eat: Savour the delicious Kutchi food. Khichdi, kadhi sweetened with jaggery, bajra na rotla with a variety of vegetables, chatni (paste of garlic and chilli powder) khaman dhokla and subji form the staple. Try the Kutchi dabeli, which is a spicy potato preparation spread between two layers of pav or burger bread and garnished with pomegranate, peanuts and so on and served with a variety of chutneys made from tamarind, dates, garlic and chilli.