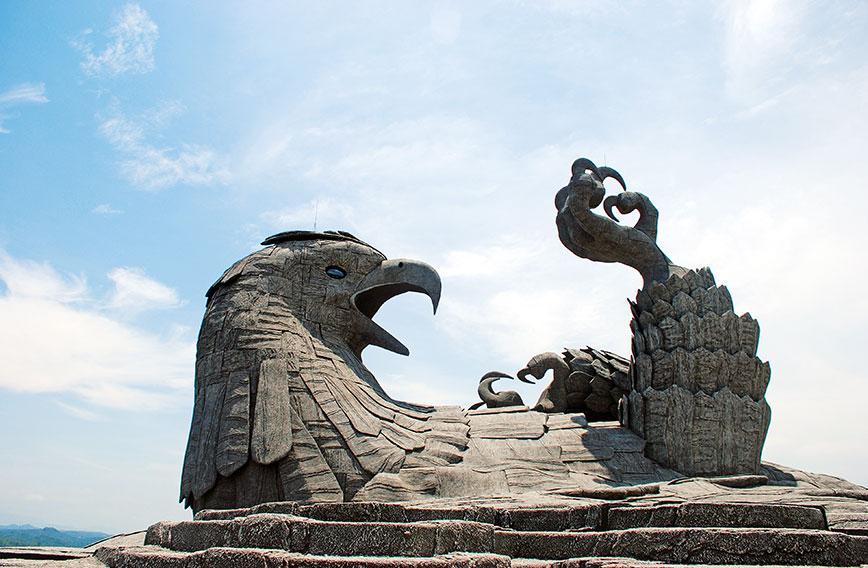 Spread over 65 acres across four hills, the Jatayu Earth’s Centre hosts the world’s largest bird sculpture at an awesome height of 1,000 feet from the bottom of the hill. The bird is none other than the heroic Jatayu, glorified in the Ramayana for valiantly trying to save Sita.

The view from atop the hill where the sculpture stands is stunning. As our cable car ascended, we saw an outcrop of primordial rock soaring high above the surrounding sylvan setting. We rose above green valleys, paddy fields, farmland and a sparkling water body encircled by looming rocks.

The sprawling sculpture of Jatayu is 200 feet long, 150 feet wide and 70 feet high. It looks as if the bird is embracing the rock. The sculpture has 15,000 sq ft of utility space beneath, including a multi-dimensional mini-theatre, which will be opened to the public later this year.

A Rs 100-crore eco-tourism project, the Jatayu Earth’s Centre has been designed through a BOT (build-operate-transfer) agreement between the government of Kerala and Guruchandrika Builders & Property, a company co-owned by Rajiv Anchal, sculptor, filmmaker and CEO of the project. Built on land leased for 30 years, the Centre, at Chadayamangalam village, is a unique blend of artistry, mythology, technology, culture, adventure, leisure and wellness.

The story of Jatayu: The hill has mythical markings and a temple fenced outside the tourist area. Legend has it that it was on a rocky peak near Chadayamangalam village that the mythical Jatayu fell while trying to save Sita from the clutches of Ravana. After a fierce fight in the air, his wings were chopped off with Chandrahasa, the sword of Ravana. Jatayu fell over this rock and waited, braving extreme weather and surviving on water he extracted from the hard rock. This pond, which is said to have never dried, is seen near the sculpture along with the footprint of Rama which got imprinted on the rock while he released the soul of Jatayu from the ailing body.

The myth of Jatayu is so intrinsically linked with the village that people say it used to be earlier called Jatayumangalam and over a period of time evolved into present-day Chadayamangalam. The peak came to be called Jatayupara (Jatayu Peak).

The sculpture is the main revenue driver here. It is one of four components which collectively form the Jatayu Earth’s Centre. The second major component is an adventure park which has been built on the side of the peak. It offers a variety of activities designed around natural rock formations. You can climb up an 82-foot rock-face, rappel down a 45-foot cliff and cross a tricky Burma bridge. Also on offer are commando nets, a vertical ladder, ziplining, chimney climbing, and trekking up a hill. The Jatayu Adventure Centre offers all this and more.

The third component is a wellness centre. Tourists interested in Siddha can opt for this traditional line of treatment in caves, part of this ecosystem. The fourth hill, known as Kitchen Rock Hill, has natural caves which are equipped with modern amenities to provide medical rejuvenation. These rocks naturally evolved into vertical column structures. The crevices in between are large enough to provide easy passage between them. Enclosures are built around this organic formation inconspicuously so that the naturalness of the rock is never lost while modern comforts are provided.

Tourists can take a stroll down the Centre’s herbal garden and feel one with nature. Those choosing this hill for rejuvenation will get a four-day package for sightseeing across Kerala in a helicopter. These facilities, on the third and fourth hills, will commence only after completion of the second phase of the project which is scheduled in 2019. Night camping and trekking through a private forest culminating in a moonlit dinner on top of a rock forms the fourth component of the rock-themed park.

“There was a time when man and wildlife lived in harmony and Jatayu is a symbol of that time. The aim is to protect the rock and preserve nature around it,” says Anchal. “Nothing dominates the rock as all the construction, including the sculpture, is designed and textured to meld into the landscape. Most of the area was barren when the project kicked off. Trees were planted well ahead and today the fallen Jatayu lies in a green haven.”

The Social Committee of the Jatayu Earth’s Centre is evident in the Eco-Guards Nature Protection Society formulated by its promoters, even before the project becomes fully functional. Professionals and experts have been roped in to draw up a responsible tourism model that will uplift the adjacent community by promoting organic farming in and around Jatayu Earth’s Centre.

Group farming, skill training, organic farming and an Incubation Centre are some of the society’s ongoing projects. Tourists will be able to buy fresh products directly from local farms. Heritage walks, farm tourism and harvest festivals are a few of the envisaged programmes under this project. The project advocates responsible tourism and will involve families from around the area to produce organic vegetables.

Native plants, which once adorned these rocky hills, have been brought back to life by replanting and careful nurturing. Conservation of rainwater is managed by a massive collection tank aesthetically built below a hilltop where fish and other aquatic life are conserved. The society aims at successful conservation of the total biodiversity on this 65-acre land and its adjoining community. Plans are afoot to tap unconventional energy sources by utilising solar and wind power for the energy requirement of the project area.

Getting there: Jatayu Earth’s Centre is 50 km from Thiruvananthapuram International Airport and 36 km from Kollam railway station.

Visitors can also avail of heli-taxi services to other major tourist attractions in Kerala.