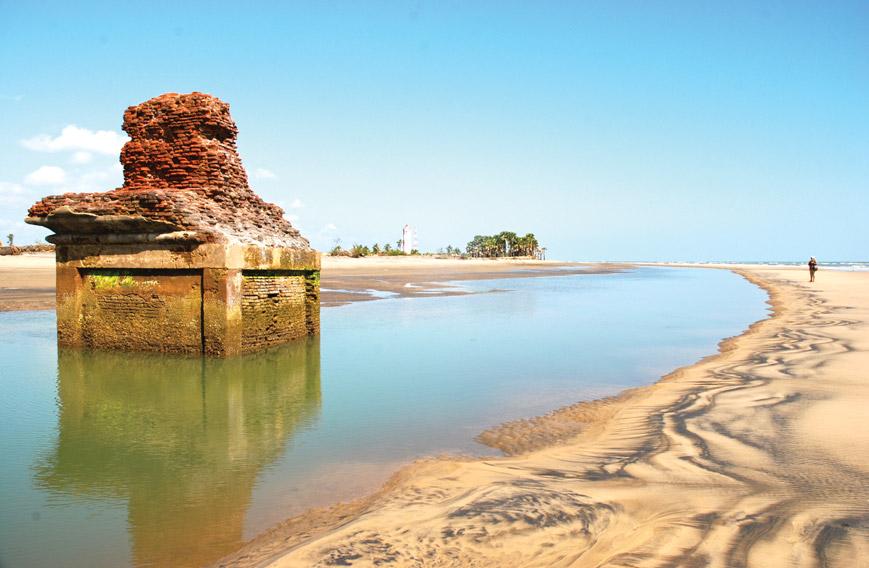 Adrift on the Konaseema backwaters

Drifting down the Konaseema backwaters in East Godavari district of Andhra Pradesh is an amazing experience. The little-visited territory of the scenic Konaseema delta, where the river meets the sea, is Andhra’s best-kept secret. Mythology, history, religion, temples… there’s plenty to unravel beyond these silent emerald waters.

But what is enchanting about the backwaters is the stunning scenery. As the boat passes down the mighty Godavari river, past coconut groves, mangroves and hamlets, the scenic charm of this magical green land unfolds. We stumbled on a kaleidoscope of pastoral delights – lush paddy fields, clumps of towering bamboo, water meadows, fish traps, banana plantations and hyacinth-filled fish ponds. The coconut palms fringing the backwaters reminded me of Aleppey in God’s Own Country.

Konaseema means ‘land’s corner’. East Godavari district is also known as the rice bowl of Andhra Pradesh. The delta is the source of a veritable feast with waterside activities like fishing, shrimp fisheries and rice farming. We cruised past the occasional open boat with sails aflutter, fishermen casting their nets for a haul, and locals crossing the river with their bikes aboard boats. As our boat sped along the mighty Godavari, the droning of the engine and the swish of the water kept us company. The shoals of fish flipping momentarily out of the river added to our delight.

As we sipped coffee, the boat made its way downstream. We savoured the beauty of the unhurried, quaint rural life on the banks of the Godavari. It’s hard to run out of places to explore along the backwaters. Our boat cruised past the Coringa mangroves lining the banks of the Tulya and Athreya, both tributaries of the Godavari, which together are said to form the second largest delta in India after the Sunderbans. The mangroves are a haven for different species of winged beauties like kingfishers, storks, egrets, and cranes. Lazing in the boat, we watched fish darting in the water and the fascinating birdlife of Konaseema. Also to be spotted here are the jumping shrimps that race along the boat and can almost be caught in your palms.

After a 10-km ride, we reached Narasapur. We saw hordes of villagers waiting to be ferried across. Narasapur was an important European trading post, but there are no visible remnants of the Dutch, the French or the English. As in the past, small ships are built here. Narasapur is also an important centre for lace-making. The place where the Vashishta river pours into the ocean is about 10 km by boat from Narasapur. The boat does not enter the sea as the river widens and becomes shallow. Instead, the boat docks at Antarvedi on the left bank and  fishing trawlers and boats with their hauls of fish loom into view.

Antarvedi is a mandatory stop on the river cruise. The place where the Vashishta meets the Bay of Bengal is called Sapta Sagara Sangam Pradesam. Antarvedi is the last and most important of the seven sacred bathing places in the Godavari delta, sometimes known as the Dakshina Kashi or Southern Varanasi. The brightly painted entrance tower of the Narasimhaswamy Temple, visible along the sands, caught our attention. It is dedicated to Lord Narasimha.

A large number of pilgrims visits the Lakshmi Narayana Temple from February to March to attend the wedding festival of the god, identified as Narasimha. According to local legend, Narasimha manifested himself in an ant-hill, where the existing stone image of the deity was discovered. This was originally kept in a shed and installed in the temple, which was erected in 1823. An interesting feature of the temple is that, on the day of the Ratha Sapthami (in January-February), the rays of the setting sun fall on the feet of the deity. The Vashishta Ashram is worth a peek.

After the temple sojourn, we headed to the deserted, windswept Antarvedi Beach, which is one of the best along Andhra Pradesh’s incredible coastline. We strolled along the black wavy patterns left behind on the sands. The new lighthouse is just a hop away from the old one which extends into the sea. We clambered up its seven floors to get a bird’s-eye view of the patchwork of fields and fishing vessels surrounding it.

The delicious cuisine of the Godavari belt complements the scenic beauty of the place. We feasted on tangy pulusu, the region’s culinary delight. It is akin to the hilsa that Bengalis swear by. We tried out the Andhra thali served with varieties of fish. A trip to the Godavari belt is not complete without sampling the spicy pesarattu, a moong dal dosa.

By air: The nearest airport is at Rajahmundry (80 km away).

By rail: The nearest railhead is Narasapur (15 km away).

By road: Narasapur, the nearest town, is well-connected with Rajahmundry to the east and Vijayawada to the west. Dindi is an hour and a half’s ride from Rajahmundry.

Where to stay: The Andhra Pradesh Tourism Development Corporation runs the Coconut Country Resort in Dindi, which is again an hour and a half’s ride from Rajahmundry. Konaseema Tourism, a group which provides travel packages in the region, also has a beautiful resort. The Konaseema Resorts, managed by them, has rooms that kiss the banks of the Godavari. The APTDC also has two-room houseboats which can be booked for 12 hours.