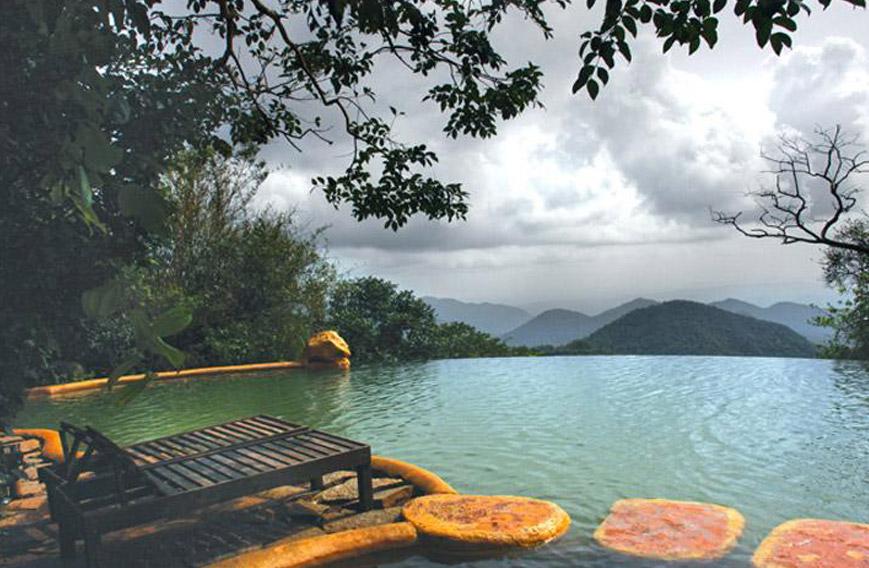 You know you’re setting out for something different when you arrive in Panjim and ask for directions to a certain forest resort in the hills and not the nearest bar on the beach. So, leaving behind the assured promise of conventional wisdom, you begin your journey further and further away from the sea, on narrow roads past small towns, towards distant  hills.

Half an hour later by taxi, the road takes off into the hills and it is suddenly quiet, cool and very green. The road is good, the thick forest on either side forms a tunnel through which I occasionally glimpse parts of the Sahyadri range, one of 34 forest ecosystems designated a global biodiversity hotspot. It is in its monsoon shade of dark green.

In a time that seems shorter than it was, I’m at the Swapnagandha and Wildernest resorts just off the main Goa-Belgaum highway. Surrounded by thick forest all the while up to this point, I get an idea of where I am only when I open the door to my cottage. Across the room and through the window that takes up most of the wall I see a densely-forested valley and on the opposite side, a waterfall. This is the Swapnagandha valley. It’s drizzling and clouds float across, and I know I could sit here for hours, like watching the waves from a beach.

Swapnagandha consists of eight valley-facing cottages. The rooms are spacious and have a verandah with a wooden floor. There is, of course, no AC, TV, fridge or the ubiquitous plastic bottle of packaged water. Instead there is fresh water in a copper jug. Both Swapnagandha and Wildernest, source their water from a perennial well clean enough not to require treatment. The water is delicious and I had lots of it.

The bathrooms, with terracotta tiles like the rooms, are neat, clean and large. They have running hot water, showers and a WC. A large window with a mesh faces the valley so that you never get cut off from the view. Again, no plastic here. The buckets are copper and for a mug there is the traditional Indian copper lota. The fittings are anodized and blend well with the general earthy and woody look that has been given to the rooms.

The rooms are comfortable and CFL-lit. There seems to have been an effort to keep them simple, bare and lacking in anything superfluous. And it works well because it encourages you to step outside and experience what this resort has to offer.

Taking a swim in the infinity pool

Lunch is served in a large wooden-roofed hall open from all sides to views of the Anjunem dam and the valley. The food is served on brass thalis from earthen pots. It is a mix of vegetable and meat dishes drawn from traditional Goan and Maharashtrian recipes. Vegetables and groceries, I am told, are sourced from Belgaum while the chicken, mutton and fish is from Goa.

“It tastes fresh and unusual,” says Mahesh Sardesai, a stock-broker from Panjim here for the weekend with his family. His wife, Shilpa, an architect, compliments the construction for “maintaining the natural look by using good materials.”

Wildernest, which was built in 2004, earlier than Swapnagandha, is about a kilometre away, but set deeper in the jungle. A jeep transports one over a narrow, rough path. There are eighteen cottages here, with views of the valley (opt for this, if you have a choice) and the forest, built in a way that they seem a part of the jungle that surrounds them.

NO TREES WERE CUT

Captain Nitin Dhond, owner of this resort, tells me that no trees were cut while building the cottages and it looks that way too when I visit one of the toilets adjoining the dining hall which is open-roofed and built around a tree (see picture). The cottages lie off the paths connecting various facilities, and one leads me to the infinity pool. The view is, again, breathtaking.

The rooms look out on the valley

Sushma Gaokar, one of the guides, also shows me the discreetly located open-air shower, which I had missed, and I notice then the fittings set in a wooden sculpture. A short walk through another jungle covered pathway takes me to the open-air massage center. The table is a slab of wood and behind a wooden screen is the bathtub, at the head of which sits sagely an elephant-headed wood sculpture bearing the faucets. Very interesting.

“No massage in the monsoons,” Sushma informs me and then motions for silence as we hear a bird call. “That’s an Iora,” she says. And its time for a trek to a hill that looms over the resort. Namdeo Vithalgaonkar, our wildlife guide, leads us through the forest up a track, stopping periodically to show us campfire sites, and guava-looking fruit that are toxic. “That’s the Karvi,” he points to a dried-up clump of shrubs. “It bears blue flowers once in seven years,” he adds and I remember seeing hillsides covered with them on a trek near Lonavla last year. After an easy climb for around 20 minutes, we stop to admire a panoramic view of the valley from atop a cloud-covered hill.

We return at dusk for tea in the dining hall whose glass windows overlook the valley. The souvenir shop is closed for the season, but it does sell forest honey, which I get a taste of at the bar in a lemon-honey drink that is refreshing. The bar, appropriately named Cloud 9, is well stocked with reasonably priced liquor. A 60ml shot of Black Label costs Rs 325 and an Old Monk just Rs 50. The thought of a whisky and charming valley view tempt me enough to wish I hadn’t quit.

And to think that this might have been some ugly, dusty open-cast mine. Wildernest and Swapnagandha are part of a 450-acre property, owned by Captain Dhond (he’s in the Merchant Navy) that extends into Karnataka, Goa and Maharashtra in the Sahyadris.

“It all began some three decades ago when our ancestral lands in Belgaum were acquired for mining,” Capt. Dhond tells me, “and I bought some 15 acres here in the 90’s out of sentimentality and the need to own a piece of land and build my own house.” Later he discovered that the lands, agricultural and privately owned, were being bought over for mining.

“I spoke to the owners and showed them what mining had done to our lands. Slowly I convinced them not to sell to the miners and bought over the lands and reforested those which had being logged. Now it is completely forested and deemed forest land.”

All this explains the attention to detail in each aspect of  Wildernest and Swapnagandha. “The cottages in Swapnagandha have been named after the villages displaced by the Anjunem dam,” he informs me. Apparently, during summer, when the water recedes in the dam, the area where the villages once stood lies exposed. “We take the guests to visit that area and see how it once was,” he says.

The cottages in Wildernest have been named after medicinal plants. “We’ve preserved a gene pool of the Amruta tree which is used in the production of drugs for treating cancer,” I am told. On the property a Nature Conservation Facility has also been established (see website) which promotes research in biodiversity studies and medicinal plants, amongst other pursuits.

Some of the activities are bird-watching trips (the best time would be November to March), trips to the waterfall (till March), visits to an organic farm located at Chorla Village and coracle boating. Some of the vegetable supplies come from organic farms, like the one at Chorla village, and from Capt. Dhond’s farm at Thirthkunde in Belgaum.

“My first objective was to stop this land from getting destroyed. Later I figured that we should try and make this self-sustaining by making a resort so that people can get close to nature,” he says.

Plastic is a strict no-no, and whatever the guests bring along is collected after being discarded and sent to Belgaum to be recycled. The used-water is sent to soak pits and recycled for watering plants while the sewage goes into a septic tank. But the power, and there is 24-hours of continuous supply, comes from diesel generators. “We’re trying to build a bio-gas plant to supply the generators. We haven’t opted for solar power as there’s hardly any sun for six months of the year, but the Nature Conservation Facility will be totally served by wind energy,” Dhond informs me.

The lamps along the paths are made from bamboo and their pools of light illuminate the densely covered paths. “Some of the paths are unlit, the luminescent fungi on the tree bark helps us there.”

Even the wood used in construction has an interesting ancestry. “A lot of Australian acacia (Acacia auriculiformis) has been planted by the forest departments, and this being an exotic species, has caused havoc in natural habitats. We used this wood and acquired all that we needed for our construction from the government or from private owners as we didn’t want any native species to be harmed,” he explains.

“All our employees come from the surrounding areas. They’ve been trained by naturalists to identify birds, animal tracks and even handle snakes. And we have some venomous ones too,” he states. Three species of viper (Russell’s, Saw-scaled and the Bamboo-pit)  and the spectacled cobra are common, Namdeo had told me while on our trek. And of course, there are the larger beasts too. It is not unusual to bump into the Gaur or Indian Bison – I did see the hoof-marks while trekking.

“Panthers are sighted and we share the pool close to the waterfall in the dry months with a tiger,” says Dhond.

“The tariffs are a bit on the high side,” Sardesai says, “but it is worth it. The experience is energising.” At Rs 3,800 for a night-stay in a room with a forest view and Rs 4,800 for the valley-view rooms, and that too in the domestic season, I would tend to agree. The rates jump to Rs 6,000 and Rs 7,000 in the international tourist season, which is from November to March.

All meals and taxes are included and so are the activities at the resort. The pick-up and drop from Panjim/Mapusa /Thivim/Dabolim are complimentary for a two-night stay onwards. Next time you visit Goa, head for the hills, and believe me, you won’t be missing the wood for the trees.

www.wildernest-goa.com www.swapnagandha.com Included in Alastair Sawday’s  “100 Green Places to Stay” Around 60km from Mapusa Open all the year round