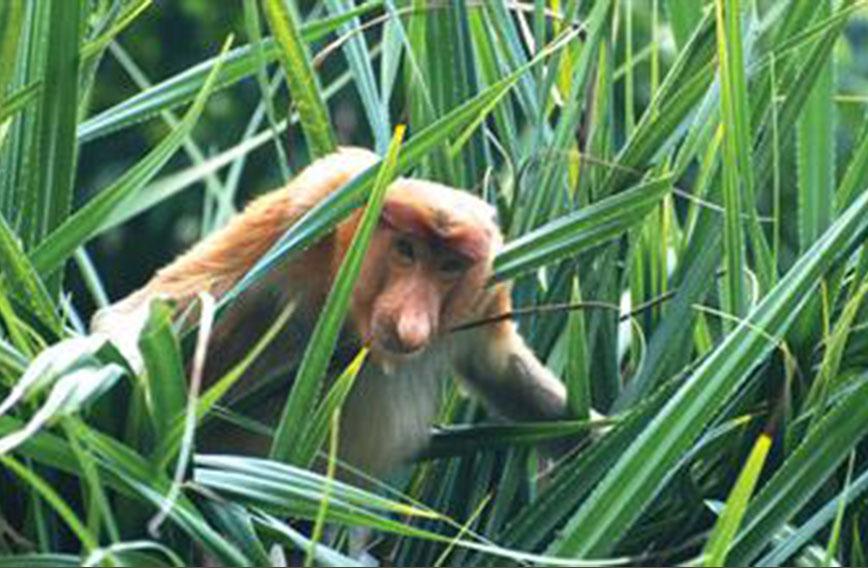 At Bako in Borneo find great jungles and beaches

To get to the Bako Wildlife Park, we took a pleasant drive from Kuching, the capital of Sarawak, to the nondescript village of Kampung Bako. The only way to reach the park headquarters is by boat so we started our wildlife sojourn by donning life jackets and hopping aboard a boat. En route along the picturesque Santubong river (the last part of the boat ride was through the South China Sea), we passed several scenic stretches of sandy bays. Steep cliffs and rocky headlands stood like sentinels, affording us a welcome.

All the beaches are lined with limestone and sandstone cliffs. Wave erosion at the base of the cliffs has carved many of the rocky headlands into brilliantly-shaped arches and stacks with coloured patterns formed by iron deposition. We saw some of these rock formations on entering the Teluk Assam Beach, which fronts the park.

Established in 1957, Bako has several claims to its credit. It is the oldest and smallest national park in Sarawak, in eastern Malaysia, on Borneo Island. Spanning an area of 27.27 square km at the mouth of the Bako and Kuching rivers, the visit to Bako encompasses a broad canvas — over 100 species of birds, a profusion of other wildlife, particularly monkeys, a panoramic rocky shoreline, bizarre rock formations, jungle streams and waterfalls, coastal cliffs, dramatic sweeps of beach and sea stacks, and scenery ranging from rolling hills to peaks.

The wide range of attractions and activities in a compact area has made Bako one of the most popular parks in Sarawak. One can explore the park through several trails, bridges and boardwalks. The well-maintained network of nature trails — ranging from easy forest strolls to full-day jungle treks — allows visitors to get the most out of this unique environment.

A distinctive feature of Bako is that, despite its small size, 25 distinct types of vegetation form seven complete eco-systems: beach vegetation, cliff vegetation, kerangas or heath forest, mangrove forest, mixed dipterocarp forest, padang or grassland vegetation and peat swamp forest. Bako’s main draw is this incredible variety of plant species and vegetation types. At Bako one can see almost every type of vegetation found in Borneo.

It is easy to explore these eco-systems via the jungle trails. The plant life includes mangroves, strangling figs, wild orchids, carnivorous pitcher plants and symbiotic ant plants. All the trails have a great variety of vegetation, from mighty 80-metre dipterocarps to dense mangrove forest.

One need not venture very far into the forest to see the different vegetation types, they are found close to the park headquarters at Teluk Assam. The area around the headquarters is an amazing site for seeing wildlife. Long-tailed macaques, silvered langurs or leaf-monkeys, common water monitors, plantain squirrels, wild boar and mouse deer are all found here. One of the macaques scampered into the canteen as we tucked into our food. Another one dug into a packet of biscuits and sipped from a can of Coke. In contrast to the unruly macaques, the silvered leaf-monkey or silvered langur is a docile and attractive creature. We found the resident Bornean bearded pig (said to be Bako’s largest mammal), rummaging for food around the park headquarters. With prominent bristles on either side of its snout, it looks different from other wild pigs.

Bako is also home to a number of snakes, most of which are harmless. They are well-camouflaged, and usually slither off into the undergrowth at the first sign of human arrival. We spent some time gazing in awe at a Wagler’s pit viper enjoying a siesta after a heavy meal. Our guide informed us that it had been resting on the same tree for the past two days.

As we followed the trails, we spotted silvered langurs, ever-playful long-tailed macaques, wild boar, squirrels and monitor lizards. Birds of every shape, size and colour dot the landscape. Teluk Assam, in the area around the park headquarters, is one of the best places for birdwatching: over 150 species have been recorded in the park, including pied and black hornbills. Large numbers of migratory birds come to Bako between September and November. Rock pools and mangroves are ideal places to sight small animals such as mudskippers and crabs, especially sky-blue fiddler crabs and shell-dwelling hermit crabs.

Our guide informed us that the other delightful creatures to watch in Bako are the two species of otters — the oriental small-clawed otter and the hairy-nosed otter which spend most of their time in the water, feeding on fish, frogs and other small aquatic animals. The largest of Bako’s many lizard species is the common water monitor, olive green in colour and reaching a length of two metres. Young monitors are green with yellow spots and therefore easier to spot. We found them near the accommodation area, scavenging for scraps.

But the highlight of our trip was sighting the elusive proboscis monkey. We heard a strange grunting sound and the crash of leaves long before we actually sighted a proboscis monkey high up in the forest canopy. It was ripping leaves off the branches and stuffing them into its mouth. “These rare proboscis monkeys are found only in Borneo. The male is a bizarre-looking creature, with a huge pendulous nose and a large pot-belly, weighing in excess of 20 kg. They are mostly arboreal (tree-dwelling), moving about the forest or mangroves in small groups and feeding on young leaves, shoots, sour fruits and seeds. The mangroves at Teluk Assam are also a good place for viewing proboscis monkeys,” explained Cornellius, our ebullient guide. We left Bako Island with a fervent prayer to save the endangered proboscis monkeys when we heard of their dwindling population due to the massive clearance of forests for palm oil plantations.

Getting there: Take a bus or taxi from Kuching town to Bako Kampung and hire a boat from there to Bako Island.