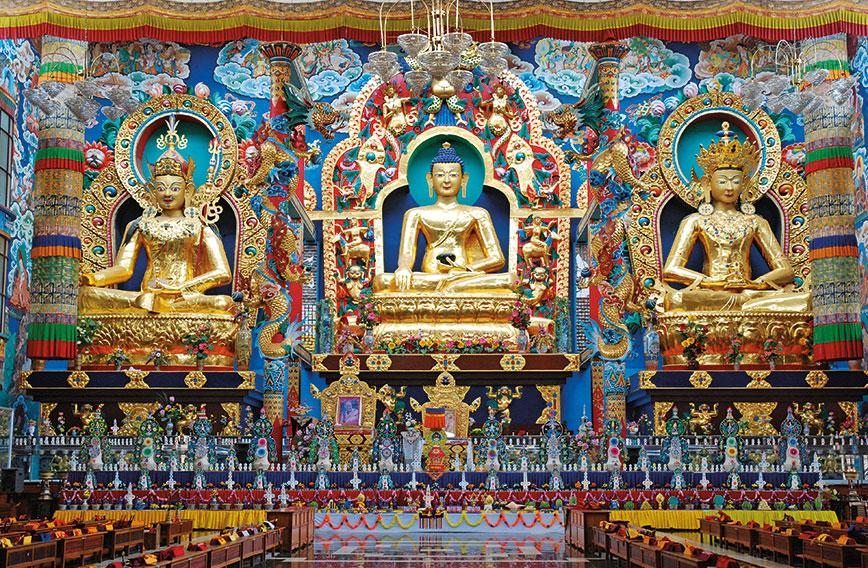 Gold-plated statues of the Buddha, Padmasambhava and Amitayus in Namdroling monastery's Golden Temple

Monasteries and momos in Tibetan heaven

We were zipping down the Bengaluru-Mysore highway (SH-17) which connects Mysore to the coffee heartland of Coorg, when an arch about four kilometres before Kushalnagar town beckoned us to another world. This was a world of stupas, fluttering prayer flags and five stunning monasteries.

The arch marked the town’s entrance. The place pulsates with the sights and sounds of Tibet. After taking a detour, a left turn and then driving inside for a kilometre we realized that we had reached Bylekuppe, the largest Tibetan settlement in India.

We saw Tibetan schoolchildren cycling on narrow roads and scores of monks in maroon and ochre robes with Buddha-like smiles. Modernity co-exists with tradition here and we sighted westernized Tibetans zooming past swathes of farmland on their motorbikes. The handicrafts and momos with chilli paste helped recreate the Tibetan environment.  We came across hundreds of shaven monks of different ages everywhere in their maroon garb walking across the grounds, or sitting in smaller halls praying loudly in their characteristic hum.

One of the largest Tibetan settlements in South India, Bylekuppe is known for its monasteries, handicrafts, carpet factories, and an incense factory. The landscape is dotted with several monasteries, the main ones amongst them being the Great Gompa of Sera Je and Sera Mey.

The Mahayana Buddhist University is located at Sera Je. It also has an enormous prayer hall. The other important monastery in the neighbouring settlement of Bylekuppe is Tashi Lhumpo monastery, renowned as the seat of the Panchen Lama. The landscape is strewn with monasteries of the Sakya, Kagyur, Nyingmapa and the yellow-hat Gelugpa sects of Vajrayana Buddhism. Easily the most picturesque of the five monasteries, Kagyu or Kagyudpa is located on an elevation and hence commands the best view. To get to Kagyu, first turn left from Bylekuppe’s main arterial road through the Tibetan Dickey Larsoe Settlement arc, and then turn right. Head past Camp 4 for a kilometre and then turn left. 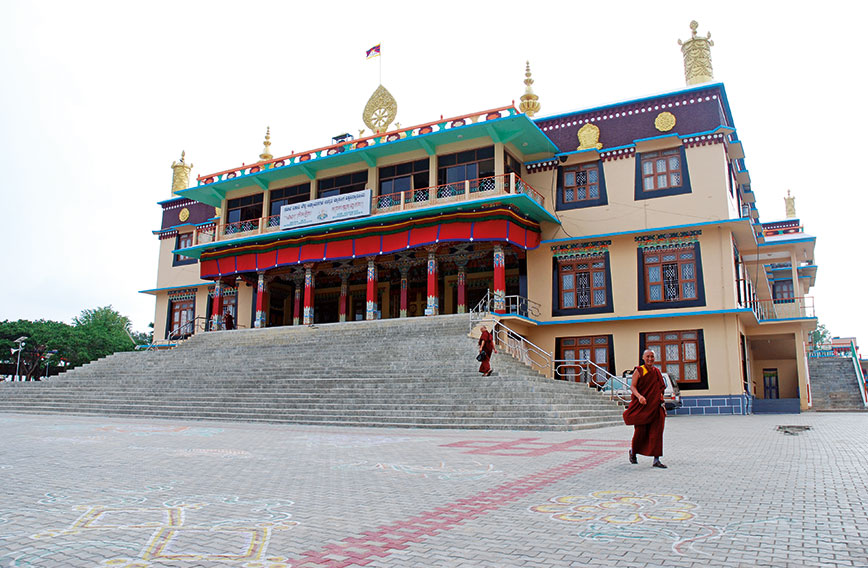 As we cruised past a sacred lake, the Namdroling Monastery or Golden Temple glinted in the far distance. Every weekend, busloads of pilgrims, tourists and entire carloads of holidaying families flock to see this spectacular Golden Temple and its 60-foot-high statues of Padmasambhava, Buddha and Amitayus. It also attracts hordes of visitors including Hollywood stars who stop by this architectural wonder to see its glorious sights.

Namdroling monastery welcomed us with its colourful flags fluttering in the breeze. This was the Golden Temple with its gold leaf exterior glinting brightly in the afternoon sunshine. As we entered the temple, we could sense the thick smell of incense pervading the halls. The place resonated with the sounds of gongs and the synchronized chants of  monks. In the expansive halls we saw the 60-foot-high golden statue of Lord Buddha and those of his disciples, Guru Padmasambhava and Buddha Amitayus, which were 58 feet tall. We walked around gaping in admiration at the numerous bright paintings on the vast expanses of gold leaf gracing the space around the three statues. The area in front of the idols is decorated with lamps, festoons and other items.  Interestingly, these halls are well-lit and bright in comparison to other monasteries in other parts of the country.

Inside the statues are the holy scriptures, relics, small clay stupas and small statues symbolic of the body, speech and mind of the Buddha. The walls have intricate paintings all over them with a wrathful form of a male and female Buddha. The prayer halls are lined with mats in maroon and ochre. Silver urns containing ghee are used to light the lamps. One can’t miss the huge trumpets and drums used for ceremonial occasions.

There is an air of serenity as an old monk goes around chanting prayers and lighting the lamps —it’s as if you have been transported to a different world. We were told that each family takes a vow to send their eldest child, girl or boy, to be initiated as a monk. The child remains in the confines of the monastery until he or she is 16 years old and then decides if he or she would like to continue or leave.

It was in 1959, during the Chinese invasion of Lhasa, that the Dalai Lama, along with 85,000 Tibetans, was forced to flee. A group of them traversed all the way across the Indian sub-continent to Bylekuppe. In days of yore the area was an uncultivated patch of flatland. That accounts for the name byla koppa meaning barren open land.

Prime Minister Jawaharlal Nehru allotted this stretch of land to the Tibetans. They have integrated beautifully here, keeping themselves busy with agriculture, coffee plantations and carpet manufacture. Today, the community is more than 20,000-strong and is thriving on 3,000 acres donated by the Indian government. Their self-reliance is amazing. Hard work and the spirit of selflessness have brought economic prosperity to them. 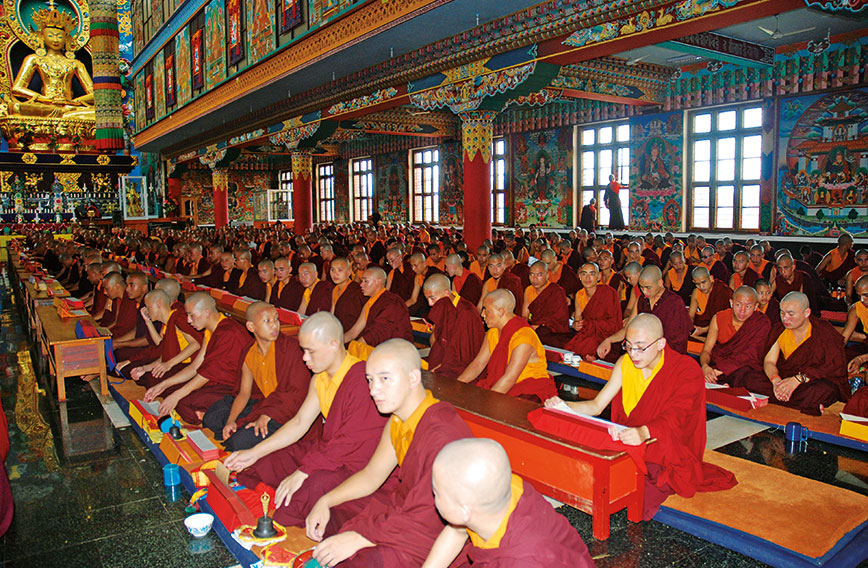 Monks in their maroon robes at a prayer session

A good time to visit is during festivals especially the Chinese New Year, when the main courtyard becomes an open stage on which masked dancers twirl in colourful costumes to the sound of gongs. The town exudes a carnival-like atmosphere as monks don lively masks and costumes for the Cham dance, swaying to music played on traditional instruments.

Bylekuppe is an excellent place to pick up an assortment of Tibetan goods. A couple of shops at Sera-Je sell thangkas, prayer wheels, incense and Tibetan music. Take a trip down to the village to look at the goodies on sale and get drawn into the carpet store. Brightly coloured dragons are the motif common to most and these carpets may be expensive but they last a lifetime.

Getting there: Nearest railhead — Mysore (92 km).

Where to stay: Kushalnagar has several options.