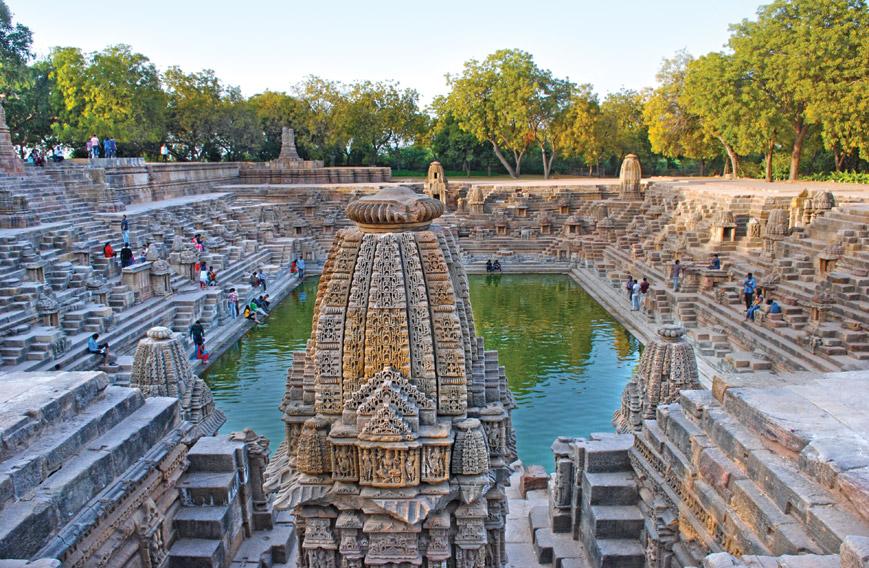 The Surya Kund in the Sun Temple

A stepwell of great beauty by a queen

After a 125-km drive from Ahmedabad, an amazing sight awaited us at the village of Patan. What makes Rani-ki-Vav or the Queen’s stepwell, a UNESCO World Heritage Site, so unique is that it was constructed by a queen as a memorial during the 11th century.  The richly sculpted monument is considered a masterpiece dedicated by Udayamati to her deceased husband, Bhimdev, son of Mularaja, the founder of the Solanki dynasty.

Designed as an inverted temple, highlighting the sanctity of water, this distinctive form of subterranean water resource and storage system was constructed in the Maru-Gurjara architectural style, reflecting mastery of this complex technique and great beauty of detail and proportion. As we stepped into it we were bowled over by the striking beauty of the stepped corridor compartmented at regular intervals with pillared multi-storied pavilions, sculptural panels and figurative motifs of superb artistic quality. As we went down the seven levels of stairs, we saw more than 500 principal sculptures and over 1,000 minor ones combining religious, mythological and secular imagery.

The majority of sculptures are devoted to the gods of the Hindu pantheon — Vishnu, Shiva and their various aspects — who appear with or without their consorts. The central level’s theme is the Dasavatars (10 incarnations) of Vishnu and as you reach the water level, you will see a carving of Vishnu reclining on 1,000 snakeheads. Some of the intricate patterns on the walls are reminiscent of Patola textile designs. In some levels we found special friezes and platforms marked out for the kings. These usually had the best natural air-conditioning, from a combination of cleverly built ducts and condensation from the well water.

Everywhere, we found small inviting platforms and ledges, probably for resting and gossiping. The well consists of a shaft 10 m in diameter and 30 m deep.  The lowest level of the well is now blocked by stones and silt but in the old days it was used as an escape route to neighbouring villages.

Rani-ki-Vav is one of the most famous legacies of the ancient capital city and considered to be the queen among the stepwells of India. These vavs in ancient times were not only used for socialising and collecting water, they also had great spiritual importance. While returning, I marvelled at the skill, devotion, and philanthropy of the creators and the immense effort taken to build a water conservation structure in a drought-prone state.

I stumbled upon Modhera, another architectural legacy of Solanki rule in Patan. Set along the backdrop of River Pushpavati rests the famed Sun Temple of Modhera. Encompassing three different yet axially-aligned and integrated constituents, the architecture of the temple is brilliant. The temple was plundered by Mahmud Ghazni yet the architectural grandeur did not wane.

Erected on a high platform, the temple appears majestic with its grand structure. Though the spires are missing, the toranas (archways) that lead to the main halls eclipse the absence of spires. The exterior walls are engraved with intricate carvings, boasting the mastery of art in those times. Every inch of the structure is covered with sculptural patterns of gods, goddesses, birds, beasts and flowers. The Sun Temple is divided into three parts, namely, Surya Kund, Sabha Mandap and Guda Mandap.

The deep, symmetrical stepped tank, the Surya Kund, named after Lord Surya (the Sun God) is simply breathtaking. Not less than 108 shrines mark the steps of this tank, including the shrines dedicated to Lord Ganesha, Lord Shiva, Sheetala Mata and many others. The Surya Kund itself is graced by a variety of small shrines — placed between the numerous pyramid steps. Intricate stone carvings of Hindu deities such as Vishnu and Shiva are enshrined between the steps at the corners of the Surya Kund.

Steps in front of this tank lead up to the Sabha Mandap, an octagonal hall. At the top of the steps are remnants of a huge arch or toran that lead to the main hall, the Sabha Mandap. Every pillar, and also the toran, is intricately carved. Literally, Sabha Mandap refers to an assembly hall where religious gatherings and conferences were conducted. This hall is open on all four sides and has 52 delicately carved pillars denoting 52 weeks in a year. The intricate carvings depict scenes from the Ramayana and Mahabharata and from the life of Lord Krishna.

Beyond the Sabha Mandap is the main temple or the Guda Mandap, supported by a lotus-base plinth. This hall once housed the idol of the Sun God. The hall was constructed in such a way that the idol received the first rays of the sun during the equinoxes. However, the idol was plundered by Mahmud Ghazni. The walls represent the Sun God in his 12 different facets, one for each month. The carved walls also depict aspects of human life like the vicious circle of birth and death. The exterior walls of the temple are replete with carvings — including 12 postures of Aditya or the Sun God. Like many other temples in India, the walls depict divine lives as well as those of ordinary people, and include a good deal of erotic sculptures. We culminated our trip with a visit to the on-site museum which has on display numerous sculptures and other stone work.

The vav is open for visitors from 8 am to 6 pm.

What to shop for: Patola saris