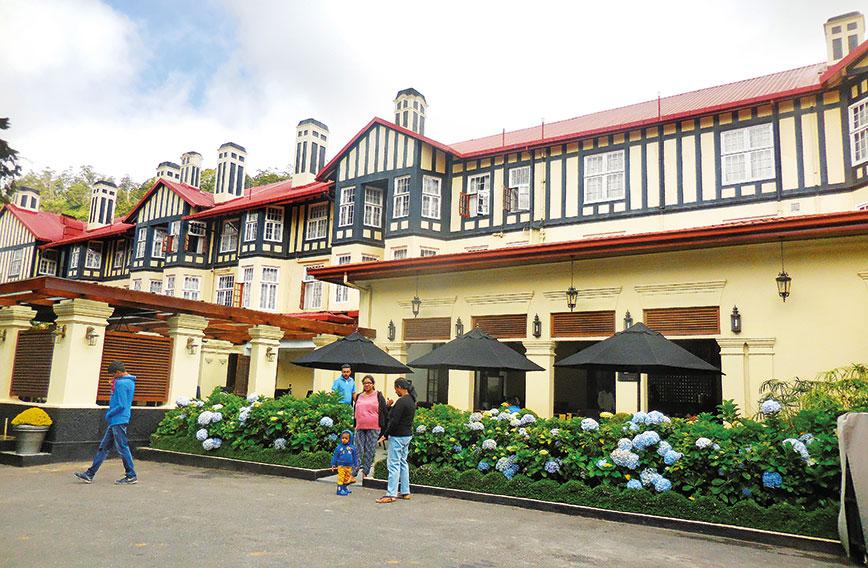 The elegant Grand is green as well

It was evening when we zoomed in to the Grand Hotel in Nuwara Eliya after a temple sojourn covering some of the important sites on the Ramayana Trail in Sri Lanka. Set in an idyllic location right next to Nuwara Eliya’s Golf Course in Sri Lanka’s highlands, it was an ideal place to chill out and overcome the temple fatigue. Originally meant to be the private holiday home of Sir Edward Barnes, the then Governor of Ceylon, it was known as ‘Barnes Hill’. This huge old colonial hotel is one of Nuwara Eliya’s major landmarks. The imposing exteriors of this hotel and time-warped public areas evoke memories of Victorian times.

This stately old building has managed to become almost synonymous with ‘Little England’. In the 1920s and 1930s the Grand Hotel was the social hub for the season’s activities for visitors from Colombo. It was teeming with homesick Englishmen and their memsahibs, who thronged this hotel to enjoy golf at the meticulously tended 18-hole course across the hotel, rambles through aromatic forests of conifers and a bit of game hunting. A number of European royals stayed here. It was also a popular summer retreat for expatriates and titans of the tea industry. Queen Elizabeth is said to have stopped by at the Grand Hotel to have a cup of tea during her visit to the island.

It has a Tudor façade and polished wooden frames which transport you to the 'sahib' era. Complete with hardwood floors, log fires, wooden staircases and antique furniture, the hotel exudes a colonial charm. The rooms are replete with sepia photos of a bygone time and red fireplaces. The public lounges are furnished with heavy wooden chairs near the warmth of open fireplaces and a huge chandelier illuminates the main restaurant. The antique clocks, drawings, water colours, photos and posters which adorn the walls of the hotel enhance the colonial era feel. Undoubtedly, a piece of Sri Lankan history, the hotel has been bestowed the title of ‘National Heritage’ by the Department of Archaeology, Sri Lanka. Grand Hotel is now under the management of the Tangerine Group, and is only slightly altered since the British era.

Passageways lead to 156 guest rooms and suites in two main wings, the Governor’s Wing and the Gold Wing, which offer views of either a neat garden or the golf course. There are three well-stocked bars, a supper club with music, an al fresco Indian restaurant during the day and a counter for takeaway food. One can savour a taste of history with high tea on the lawn.

The billiard room flaunts Sri Lanka’s oldest billiard tables. These tables were brought from London to India and fitted with patent ‘Burwat Steel Vaccum’. At the Public Bar, one can experience a nostalgic environment, a gently crackling fireplace, all setting the tone for you to enjoy your favourite drink in the bar. Try the no wheat and no meat menu at the al fresco Mindfulness Café.

Green Initiatives: An avenue of lofty fir trees lines the drive to the entrance. The most remarkable feature of the hotel is the immaculately manicured garden with well-tended hedgerows and lush lawns which have bagged innumerable awards for 30 consecutive years.  It is one of the oldest gardens in Sri Lanka. The garden is a riot of colours, spilling with salvias, anthuriums, marigold, pansies, gerberas and chrysanthemums.

A large number of plants found in the garden were introduced from Europe over the last century and a half. One of the secrets of maintaining the garden in impeccable condition all through the year is the plant propagation and nursery management techniques which have been passed down through generations of gardeners.

Explaining the hotel’s contribution towards environmental conservation, Refhan Razeem, the hotel’s general manager, said, “Some of our noteworthy programmes include organising monthly conservation programmes such as tree planting to create a habitat for endangered animals, a reforestation project at Black Pool in a five-acre plot of land infested with an invasive plant named Sikkim knotweed. A group of youth working for the hotel launched a campaign to eradicate the use of single-use polythene in Nuwara Eliya. Usage of plastic straws, shopping bags and also single-use plastic have been discontinued in the hotel.”

“The treated wastewater from the Sewage Treatment Plant is used for the garden. Wet food waste is used as feed in the Hotel Farm as pig food. Zero food waste is practised in the hotel. The
indoor pool and spa use natural lighting. The pool is designed to save energy in water heating by installing double glazed glass windows, doors
and roofing. The employee restaurant has introduced   two no-bin days per week, where no food is wasted by the employees as there are no waste bins,” he added. The Grand Outdoors unit of the hotel promotes nature and adventure activities such as trekking, birdwatching, fishing, cycling, air rifle shooting and so on.

Resuming our Ramayana Trail, we visited Hanuman Temple, Gayatri Peedam and Seetha Eliya. The Seetha Amman temple here is built in typical South Indian style, with stucco images from the Puranas and scenes from the Ramayana. Three idols were discovered here a century ago, one of them of Sita. We saw the sanctum for Hanuman, the monkey god who vowed to return Sita to Lord Rama. We descended to the rocky stream below to have a look at a giant footprint, said to be Hanuman’s, before we left Nuwara Eliya.