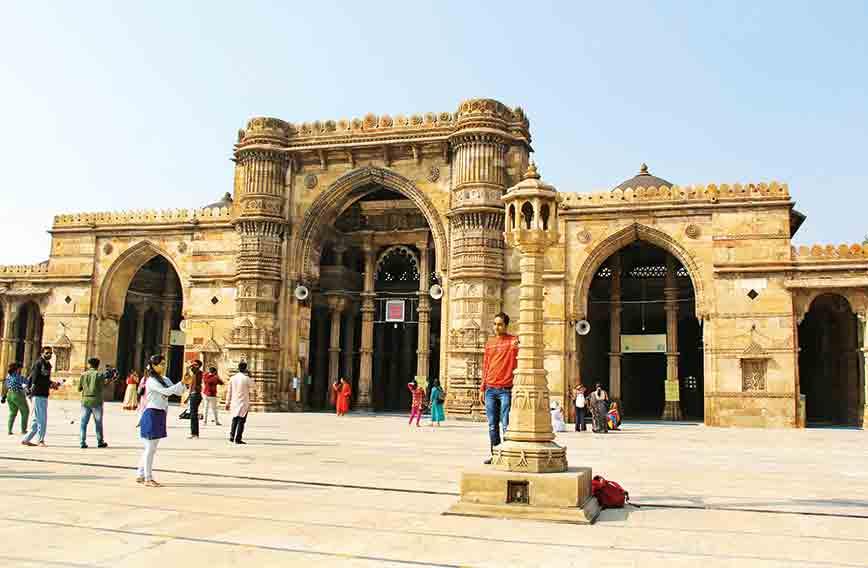 Jama Masjid, the city's oldest mosque, is a blend of Hindu, Jain and Islamic architecture

Walking into the past in Ahmedabad

ON a cold winter’s morning, I sauntered into a maze of narrow lanes in Ahmedabad, India’s first UNESCO World Heritage City, accompanied by a motley group of social media influencers from all over India. We were on a heritage walk in the walled city of Ahmedabad, a hoary place where the past is ever present. As we wandered through its historical streets, we could hear echoes of the past.

Ahmedabad is to be experienced rather than described. Right from the Siddhi Syed Mosque with its iconic Tree of Life lattice work, symbolizing the living heritage and longevity of Ahmedabad, to the majestic Bhadra citadel and the elegant carvings in the Hindu and Jain temples, the Indo-Islamic architecture and Hindu-Muslim art symbolizing unity, this historical city is a sight to behold.

There are poignant reminders of communal harmony here: a lamp burning for 600 years under the care of a Muslim family for Goddess Lakshmi in Teen Darwaza, the ceremonial gateway built by Ahmed Shah, the Queen’s Tomb, a fusion of Jain, Hindu and Islamic architecture, and the Jama Masjid, with its Indo-Islamic architecture.

What makes Ahmedabad distinctive is that for over 600 years, it has stood for peace. A landmark city, this is where Gandhi began India’s freedom struggle. Gandhi’s Sabarmati Ashram defines tranquility. No matter which regime took over the city in the past six centuries — be it the Solanki or the Gujarati Sultanate, the Mughals or the British — the synthesis of architecture is something so special to Gujarat and Ahmedabad celebrates this. The intermingling of architecture is one of the key factors behind UNESCO’s decision to list Ahmedabad as India’s first World Heritage City.

We began our heritage city walk by going to the country’s first Swaminarayan Mandir, built in 1850. It is a fine example of Maratha and Jain architecture. The opulent carvings that embellish every Burmese teak arch, wooden bracket and column add a splash of colour in the midst of the city’s grey. From there, we were led by our guide through labyrinthine lanes to the bronze statue of Gujarati poet Dalpatram which sits in the porch of a replica of Dalpatram’s original home in Lambeshwarni Pol. The Kathiawari embroidery on his kurta, the worn-out right foot and the meditative look in his eyes grabbed my attention.

The Old City is full of surprises and quirks like the pols which originated as a protection measure when communal riots necessitated greater security. These gated neighbourhoods, consisting of clusters of houses, comprise many families of a particular group primarily connected by religion and caste. Laid along narrow streets, each has its own security system, secret passages, public wells, havelis, bullion market and even a stock exchange. Equally amazing are the well-entrenched systems of traditional rainwater collection, sewerage treatment, earthquake proofing and flood protection.

A pol is like a closed community which is called a walled locality within the walled city. Pols are akin to our contemporary gated housing societies. These neighbourhoods are both the backbone and heartbeat of the old city of Ahmedabad.

En route we passed by temples, community wells, and chabutaras or bird feeders built to rejuvenate the avian population.  I saw some residents of the pol climb up and replenish grain and water for the birds in the chabutaras. I was overwhelmed by the public-spiritedness of the creators who realized the need for chabutaras for birds to nest due to shrinking space following deforestation. There are also parrot holes on the walls of houses to allow parrots to build their nests in the absence of trees. However, squirrels make more use of them than parrots.

At every corner, there was a surprise awaiting us like the Kala Ram Mandir which houses a unique idol of Lord Rama in a dark colour, in a sitting posture. It is believed that the idol resurfaced on its own post-Independence — hundreds of years after the temple’s priest had hidden it to protect it during the Mughal period.

Equally interesting is the Shanthinathji Mandir which flaunts an octagonal dome, brackets and pillars carved with musical instruments. The Sambhavnath Ni Khadki is an intriguing ancient Jain temple with an unassuming entrance, an open courtyard dominated by domes and a hidden place of worship in the basement. Intimidated by Muslim invasions, the temple had to be camouflaged. For those who cannot descend the steep steps, a mirror in the backyard offers a reflected image of the deity.

At Kuavalo Khancho, a street corner, the beauty of the various architectural marvels of Gujarat with Mughal, Maratha, English and Persian influences visible outside the houses of pols left us spellbound. We then walked through the historical Fernandez Bridge where a second-hand book market sells thousands of old college textbooks on carts. Just beyond the bookstalls are scores of shops peddling textiles, foodstuff, temple accessories, ethnic Indian wear, and so on.

Along the way, the Victorian-era Old Stock Exchange offers a contrast to the area’s indigenous architecture. From there we headed to Manek Chowk, one of the most happening places in the walled city. This narrow lane wakes up as a vegetable market, then in the day transforms into a bullion bazaar bustling with shops selling gold bars, brass lamps and jewellery. At night, after the shopkeepers pull down their shutters, the street gets transformed into an open-air plaza, popular for its amazing variety of street food.

We culminated our walk in the serene Jama Masjid, one of the enduring landmarks of the city located in the midst of the chaos of Gandhi Road. Claimed to be the city’s oldest mosque, it flaunts 256 pillars, intricate filigree work, Arabic calligraphy and an ablution tank in the centre of the compound. A unique feature of this mosque is that it has an amalgamation of Hindu, Jain and Islamic architecture. I returned entranced by its old-world charm, diversity and seamless blend of cultures and with the reassurance that heritage is definitely the essence of Ahmedabad.