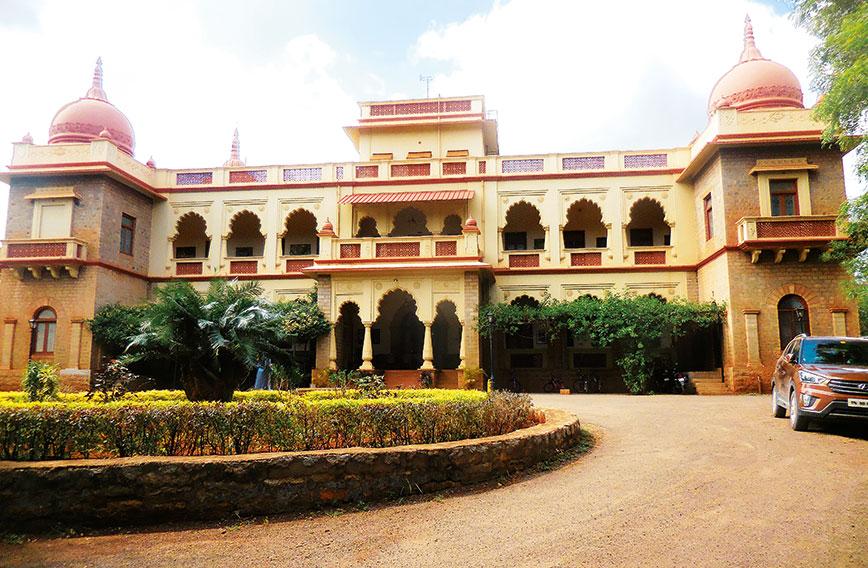 An oasis in a valley

Located in the heart of Karnataka’s Bellary district, Sandur, which in Kannada means ‘town between hills’, is defined by a valley surrounded by forested hills and the Narihalla reservoir with its twin boulders emerging out of the water. Mahatma Gandhi described Sandur as ‘an oasis’ when he stopped over for a few days in 1934 on the invitation of the royal family of Sandur.

Following the forest department's travel advice to ‘See Sandur in September’, we embarked on a trip to Sandur that month. Thanks to the ban on illegal mining, the land continues to be rich in forests, flora, fauna and deposits of iron and manganese ore. Its population includes people who have had their roots in its soil for many, many generations and those who came as nomads, and then decided to stay.

Once upon a time, Sandur was renowned as Skandapuri in honour of the temple dedicated to Skanda, or Kumaraswamy, that still stands. In the days of yore, it was home to panthers, deer, chinkara or Indian gazelle, peacocks, amid one of Earth’s oldest rock formations.

To delve deeper into Sandur’s history we start our royal exploration at the Shivavilas Palace, home to the last Maharaja of Sandur, M.Y. Ghorpade, the Cambridge-educated scion of the ruling family who handed over his territory to the Government of India in 1949. It is no wonder that this heritage hotel has a homely ambience. Sprawling over 20 acres, built in the 1900s, and painstakingly restored in 1941, this palace started operation as a WelcomHeritage Hotel in 2012. A driveway lined with trees leads to the red-domed palace.

Escorted around the palace by Sameer Ahmed Taj, the resort’s general manager, we felt as if we were travelling back in time. An anteroom leads to an open courtyard where a bronze statue of a lady with a lamp heralds a welcome. This was a gift from the raja of Pudukottai. The pillars, the corridors and the arches of the two floors of the palace overlook the courtyard. The palace has two floors of about 20,000 sq. ft each.  The first floor is the residential section with 12 rooms and suites of which the Maharani Suite is perhaps the pick of the bunch, closely followed by the Maharaja Suite, though the deluxe rooms are all equally comfortable. 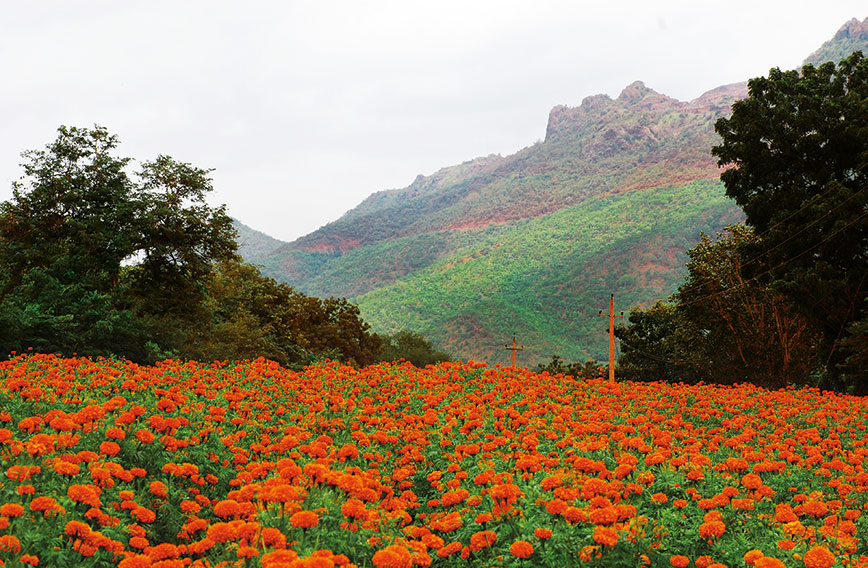 Vast stretches of marigold on the way to the Kumaraswamy temple

The ground floor houses the offices, dining hall, two temples, a billiards room with bar, and a ‘durbar hall’, a veritable museum of regalia and weaponry. The library is a treasure house of books, some over 100 years old, besides old copies of National Geographic magazine. Around the ground are a swimming pool, a spa and a garage with the maharaja’s collection of vintage cars which includes a hunting Jeep, a Mercedes and a Dodge. The vintage edition photos and relics of the royal family, Lambani wall hanging, antique furniture, weathered cannons, elaborate embellishments on the pillars, delicate jali work all transport one back in time and  render it a memorable experience. Don’t miss the Sandur Thali, a platter of North Karnataka dishes, at lunch.

We began our Sandur sojourn with a visit to the more than 1200 years old Kumaraswamy temple built by the Chalukyas which is now a protected monument. It was discovered by the local rulers, the Ghorpades, on the thickly-wooded Swamimalai hill in the 15th century. Though women were allowed to worship at the Parvati and Shiva shrines adjacent to the Kumaraswamy temple, it was out of bounds for women for centuries. Initially, special tin barricades and a curtain were hung across the precinct to prevent women from taking a peek at the idol of Kumaraswamy.

According to a temple priest, the reason for this was the belief that Kumaraswamy, the son of Shiva and Parvati, had vowed never to look at a woman. In deference to Kumaraswamy’s wishes, women were barred from the temple.

The head trustee of the Kumaraswamy temple, M.Y. Ghorpade, a former Congress finance minister of Karnataka, felt that religion should not discriminate. Thanks to his progressive outlook, the ban on the entry of women into the temple was lifted in 1996. The Ghorpades, much loved and respected by the locals, declared the temple open to Harijans as early as the 1930s. After learning of this on his visit to Sandur in 1934, Mahatma Gandhi said, “A small state in south India has opened the temple to the Harijan, the heavens have not fallen.” 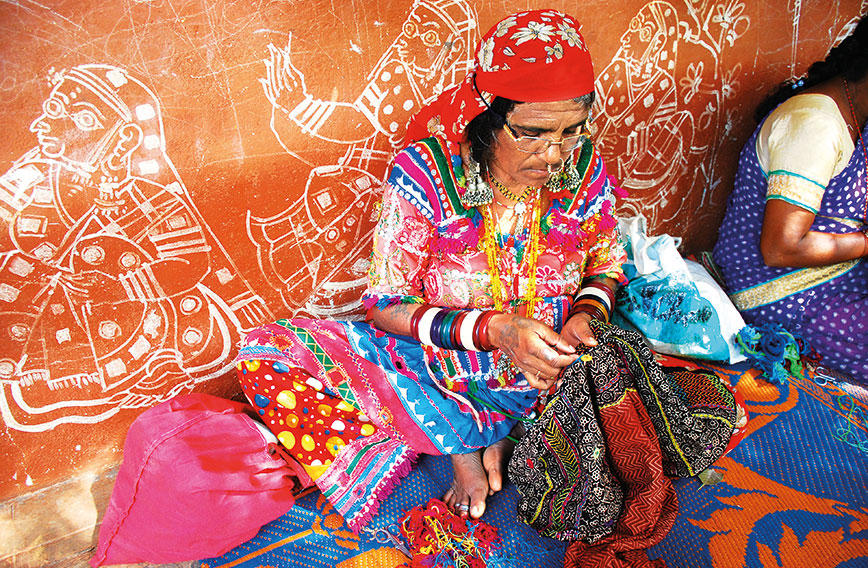 A Lambani woman at work at the Sandur Kushala Kala Kendra

Also in the vicinity of the palace is the Sandur Kushala Kala Kendra (SKKK), established to revive and market traditional Lambani craft. As we walked into the premises of SKKK, we encountered a motley group of colourful, Lambani women from the neighbouring settlements engrossed in weaving magic and creating marvels out of scraps. Using thread pulled from old saris, they sewed small pieces of cloth together to create beautiful garments, linen and accessories in their traditional style of patchwork, embroidery and mirror work.

The designs, motifs and colours were inspired by images from their nomadic lifestyle and their folk traditions and rituals. Traditionally, these painstakingly created items were an essential part of the bridal trousseau. In the past, work on a trousseau began as soon as a girl was born! The centre also has units for khadi, sculptures in wood and stone, and craftwork in stone. SKKK owes its existence to the initiative and involvement of Sandur Manganese and Iron Ores Limited (SMIORE).

Rail: Sandur is 21 km from Torangallu railway station. Hospet is a 25-minute drive from Sandur.

Air: The nearest airstrip is Vidyanagar.

Road: It is a five-hour drive to Sandur from Bengaluru.

Excursions: Visit Hampi, Anegundhi, and Daroji Bear Sanctuary, all within driving distance. One can also visit one of the mines operated by SMIORE.