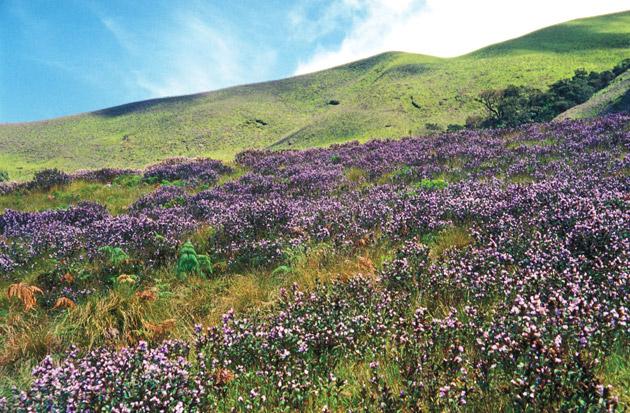 Great park gets back rare goat and more

Ensconced between the high ranges of the Kannan Devan Hills in Idukki District and the Annamalai hills, the Eravikulam National Park encompasses 97 sq. km. Within the park you can experience the breathtaking natural splendour of undulating emerald grasslands interspersed by wooded valleys, shrub land and shola forests, crisscrossed by cold, clear streams.

But the pride of Eravikulam and its mascot, is the  incredibly agile Nilgiri Tahr, a highly endangered animal, listed in the IUCN Red Data Book. The park’s other claim to fame is the spectacular blooming of the purplish blue flowers of the neelakurinji shrub (phlebophyllum kunthianum) once in 12 years. Anamudi, the highest peak in South India, which towers 2695m (98841ft), also resides inside this park.

The history of the Eravikulam National Park can be traced to the colonial era when tahrs began to be slaughtered by British settlers. The widespread killing of the Nilgiri Tahr goats started  when the army of the Duke of Wellington, who camped here during his offensive against Tipu Sultan, began killing the goat resulting in its population going down drastically.

Tame and friendly, the tahrs unfortunately became a favourite item on the camp menu. The goat was poached into extinction in the 1950s, before an NGO stepped in and ensured their mountainous habitat was declared a sanctuary. The goats learnt to keep aloof from human beings. Salt licks were put out and Clifford Rice, an American biologist, who spent time researching  this unique species, succeeded in taming tahrs by enticing them with salt.

You can see a profusion of red rhododendrons, flame of the forest and myriads of orchids and balsams in this shola-grassland ecosystem. An orchid (Brachycorythis wightii) that was long thought to be extinct was rediscovered in this part of the park.  Once in 12 years, the neelakurinji carpets entire hillsides and valleys as far as the eye can see. The next neelakurinji ‘outburst’ is due in the year 2018.

Apart from the Nilgiri Tahr, the park’s priceless treasure, other lesser known animals such as the Nilgiri marten, small clawed otter, ruddy mongoose, dusky striped squirrel and small Indian civet are also found here. The undulating terrain of the park serves as a migratory route for elephants to the Chinnar Wildlife Sanctuary. The park also shelters sambars, gaurs, macaque, the occasional tiger or leopard and wild dogs, the most feared predators of the grasslands.

About 120 varieties of birds have been documented here including endemic species like the black and orange flycatcher, the Nilgiri pitpit, Nilgiri wood pigeon, white bellied shortwing, Nilgiri verditer flycatcher and the Kerala laughing thrush. Around 100 species of butterflies can be spotted including endemic ones confined to the shola-grassland ecosystems like the red bush brown and Palni Four Wing.

Visitors are allowed to go only up to Rajamalai, the tourism zone which is approachable by vehicles. It is a high altitude rocky precipice of the National Park. Rajamalai, as its name suggests, means ‘a king among the hills’.

We followed the footsteps of the nimble-footed wild goats which live in herds on the steep black rocky slopes of the Anamalais. It is here in the downs and crags of Rajamalai that we sighted the Nilgiri Tahr, an endemic animal of the Western Ghats. We found these sure-footed animals foraging for grass and the frisky young ones scaling up and down the slopes with such amazing ease and grace that they have been bestowed the title of ‘the mountain monarchs’.

Tahrs are brownish and have short, flat horns. The male has a thick mane and can be easily seen around the entrance.

Eravikulam’s estimated tahr population is around 800 making it the largest viable population in the world. One- third of the world’s population of tahrs reside in these emerald grasslands.

We stopped by at the Interpretation Centre called the ‘Story of the Park’ which provides valuable insights into this ecosystem. Supported by captivating visuals, it is worth a peek. From the Interpretation Centre we took a short stroll along the road through the grasslands. The valley view from the park is stunning. The core and buffer areas are out of bounds for tourists. Even trekking is not permitted in these areas.

We were impressed by the park’s fascinating story of efficient protection and management of its biodiversity. The High Ranges Game Preservation Association managed the area as a Game Preserve for the erstwhile Kannan Devan Hills Produce Company by employing the Muduvan tribals, the original inhabitants of these hills known for their tracking skills, as game watchers.

The park area was taken over by the Kerala Government in 1971, declared a Sanctuary in 1975, and upgraded to a National Park in 1978 in recognition of its unique ecological values and to protect and preserve the endangered Nilgiri Tahr.

The erstwhile hunting preserve of the British settlers currently embodies wildlife management at its best. Along the tarred road leading to the park we found innumerable signboards cautioning the tourist to show concern for the environment and not to litter the place.  All these have contributed to the success of eco-tourism in the park. Now it has earned the recognition of being the cleanest and most well managed National Park in the country. The Nilgiri Tahr Foundation was formed to spread the message of conservation.

Today, the animals roam around freely, thanks to the efforts of Clifford Rice and the High Range Wildlife & Environment Preservation Association (HRGWEPA). The planter community and the Muduvans continue their association with the protection and management of the park along with the Forest Department.

How to get there: