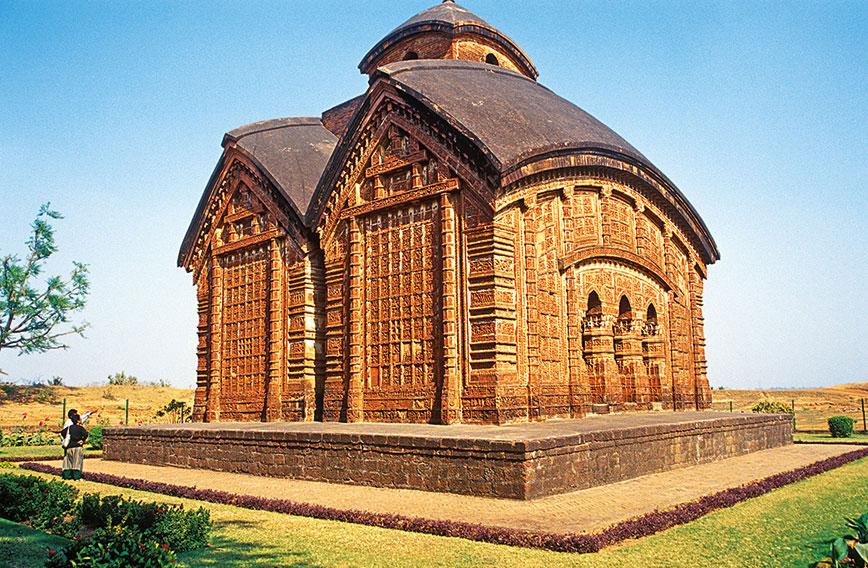 Jor Bangla, the most striking terracotta temple of Bishnupur

FROM Kolkata, the dusty terracotta temple town of Bishnupur is just a 200-km train ride through lush green paddy fields and hamlets. It is steeped in history and resonates with interesting tales of the Malla rulers who made it their capital from the 16th to the 19th centuries. The town went through a cultural renaissance as art and culture flourished during their reign. It was once an island town with eight interconnected embankments and artificial lakes built for beautification of the town and also to serve as a protective moat to repel enemies.

We took a cycle rickshaw ride from the railway station to the fascinating temples scattered all over the town. Most of the 30 temples are in clusters excepting a few which stand in splendid isolation, like the Pancha Ratna. The distinctive feature of the Bishnupur temples is that they resemble local huts in their structural design. The local red soil was the basic construction material for terracotta tiles. The moulded baked clay panels were fixed on structures raised with clay bricks. On the filigreed terracotta tiles, scenes from the Hindu epics like the Bhagawata Purana, the Ramayana and the Mahabharata were artistically depicted.

The very name of the town is associated with the deity in whose honour the exquisite temples were built. Birhambir, who was the greatest ruler of the Malla dynasty, was originally a bandit king who robbed and looted indiscriminately. But he had a change of heart after a chance encounter with a disciple and Vaishnav scholar of the Sri Chaitanya cult, Srinivas Acharya. This meeting had a powerful impact on him, and transformed him into a Vaishnavite. It prompted him to build temples to Vishnu and Krishna. He was followed by other Malla kings in the same vein.

The temples of Madan Mohan, Shyam Ray, Jor Bangla, Radhey Shyam, Radhagovinda and Lalji display an amazing wealth of detail in the ornate carvings. But the Ras Manch, built like a step-pyramid, is the most striking monument of Bishnupur. Built by Hambeer, the greatest Malla ruler, the pyramid-like structure is the only temple of its kind in India. The temple has a small central shrine  surrounded by three graceful arched galleries decorated with terracotta lotus motifs and panels depicting dancers and singers.

The earliest edifice is the Rasa Manch, a platform for Rasleela festivity. Built in 1600 by King Birhambir, it has a pyramid-shaped roof topping triple arched galleries on a square platform. During the zenith of the Malla dynasty, Rasa Mancha was the venue of an annual festival when idols and images of gods were brought from all neighbouring temples and displayed under the arches. The arches give an impression of space and light, and in the dappled sunlight of noonday, the whole structure seems to float. Devotees would assemble here
from even far-flung areas of Bengal to pay their respects to individual gods. Now, Rasa Manch is a protected monument and no longer a temple in use. The popular festival has been shifted to a ground near a Durga temple where it carries on with the same zeal. 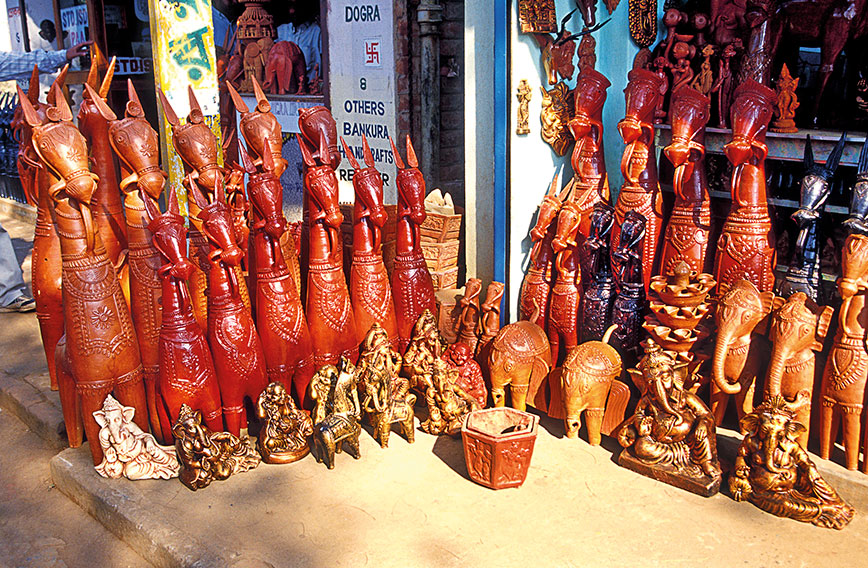 The sculpturally resplendent Madan Mohan temple with its intricately carved pillars embellished with 64 dance poses is amazing. Equally appealing are the lavish terracotta carvings of Dasavathara, Bhishma sleeping on a bed of arms, kings on hunting expeditions and the amorous couple, Radha-Krishna. Another piece of impressive architecture is the Keshta Raya or Jor Bangla (joined houses) temple constructed by Raghunath Singh II. It was quite different in architectural design, bearing the appearance of huts joined together at the centre to form a single temple. Every inch is covered in terracotta figures of men and women engaged in their chores, martial scenes and events from the epics.

We stopped by Dol Madol, a huge cannon constructed in 1742 by Raja Gopal Singh to keep the Maratha troops at bay. According to the villagers, when Muslims once attacked the town, no human could fire this mammoth weapon and Vishnu descended to earth and fired it, saving the town.

Some of the other temples in Bishnupur worth visiting are Lalji, Mrinmoyee, RadheShyam, Pancha Ratna Temple of Shyamrai and the Jor Mandira cluster of temples. The Jogesh Chandra Archaeological Centre is worth a peek for its traditional art, sculptures, coins, books and relics from the Malla dynasty. The Shyamrai temple, built in 1643 by  Rajnath Singha, is slightly different in that there are  four square linked towers  carved with terracotta  tiles depicting scenes from the lives of the gods displayed in luxurious detail.

Besides the bevy of beautiful terracotta temples, Bishnupur is reputed for its pottery, especially the terracotta horse called the Bankura horse, the mascot of Bankura handicrafts, and terracotta bric-a-brac like carvings, crockery, jewellery and figurines. Other must-buys are metal ware, conch-shell jewellery and Baluchari saris with scenes from the Hindu epics woven into them and the quaint circular playing card called ganjifa which have hand-painted figures of the 10 avatars of Vishnu on them.

This erstwhile Malla capital has a rich cultural heritage. Another claim to fame is the gharana of classical music. In August, Bishnupur wakes up to the enthralling music of snake charmers’ pipes when the annual festival of Jhapan is celebrated with snake shows and snake fights. Make sure to be in Bishnupur in December when the entire town is taken over by the week-long Bishnupur Mela, marked by colour, mirth, revelry and cultural programmes.

By road: 151 km northwest of Kolkata

By train: 200 km (four hours from Howrah station) One can hire a cycle rickshaw puller. They offer tours to the important temples around the town