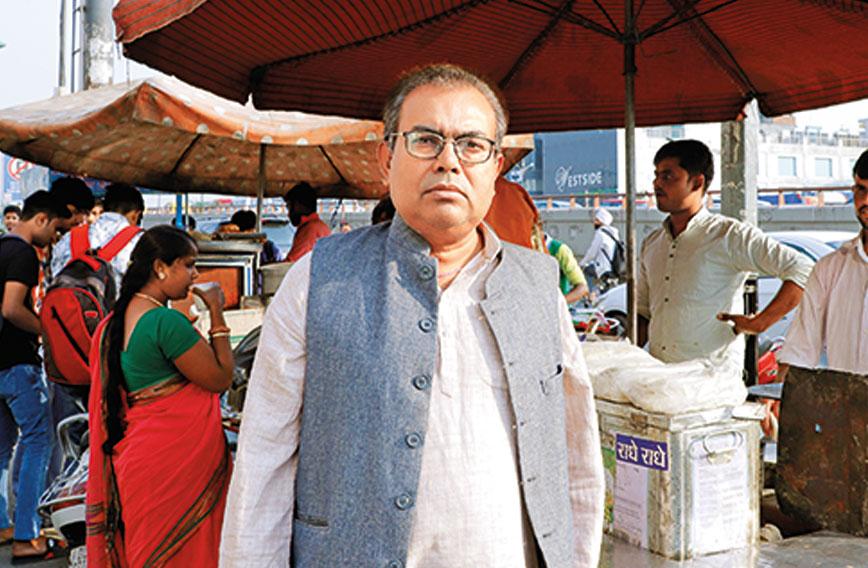 Arbind Singh: 'Neither the municipal corporations nor the state government understand the law.'

Vendors protest to make a point in Delhi

Street vendors in Delhi called off their four-day protest after municipal officials assured them that their demands would be looked into. The municipal corporations have been limiting busy shopping areas to pedestrians by keeping out cars and other motorised vehicles. The initiative is welcome, but it has resulted in the eviction of street vendors from their traditional spots on pavements without integrating them into such plans or providing them alternative zones.

Vendors are globally seen as being integral to city life. In India, the Street Vendors Act of 2014 protects them from eviction and guarantees their right to livelihood.  The municipal authorities in Delhi have, however, pushed vendors out. Implementation of the Act through the setting up of effective town vending committees in Delhi has also been problematic. The committees are too many and dysfunctional.

Arbind Singh, national coordinator and a founding member of the National Street Vendors Association of India (NASVI), tells Civil Society that the misinterpretation of the Street Vendors Act by the Delhi government has led to the highhandedness of the municipal corporations.

Why were street vendors protesting before the Civic Centre?

Both the Aam Aadmi Party (AAP) and the Bharatiya Janata Party (BJP) had promised that they would give street vendors designated spaces and licences during the last assembly elections. The AAP manifesto specifically mentions it.

Even before the local municipal elections they repeated their promises. Keep in mind that the Street Vendors Act, 2014, protects vendors from arbitrary eviction. In the implementation of this Act, both parties have been playing games.

I have said this before and I’ll say it again that the 29 Town Vending Committees (TVCs) that the AAP government has set up are just way too many. The numerous number of TVCs simply ends up absolving the municipal commissioner of all responsibility and he is the one vested with powers under the Street Vendors Act. Across India, there are 2,000 TVCs so far.

So the municipal commissioner can turn around and say that they have nothing to do with vendors and evictions. Talking to 29 TVCs is a humongous task and then, how do you follow up? That is the first problem.

Who is heading the TVCs?

The Delhi government is supposed to set up grievance redressal committees. But they haven’t done so. They have written to the High Court asking for 15 judges. They needed to set up five grievance committees, three for the municipal corporations, one for the New Delhi Municipal Corporation and one for the Delhi Cantonment Board. They just needed five names. Why ask for 15 judges and then select from them? That will never be acceptable to the judiciary. These are foolish steps that cannot be implemented on the ground.

The third issue is that they are launching a survey of street vendors in Delhi. But the responsibility of doing this survey has been given to an external agency which is a database company. Now database companies know nothing about street vendors. They won’t be able to do the survey with accuracy which, in turn, means that whatever processes exist will be diluted further and cause delays which will lead to controversies and we will end up going nowhere.

Aren’t TVCs supposed to do the survey? Is NASVI represented in the TVCs?

Yes, TVCs can do the survey. They won’t let NASVI be part of the TVCs but there are vendors who are part of the committees. We have a presence in only the Karol Bagh TVC. We knew they wouldn’t want us in the TVCs and so we didn’t push for it either.

If the TVCs can do the survey, why is an external agency being hired?

That is what is baffling us. We wrote to Chief Minister Arvind Kejriwal saying that instead of giving the task of surveying vendors to us or to them, give it to an independent institution, like the School of Planning and Architecture. They can carry out the survey quickly and they understand issues facing vendors.

Is your grievance against the Delhi government or the municipal corporations?

It is against both. Primarily, the municipal corporations are responsible for us. On the other hand, when the law was being drafted it was made clear that the state government too has a role. If they have no role, the law will never be implemented. The state government is not doing anything in this case. The municipal corporations do nothing for street vendors. In fact, they harass street vendors and those incidents are increasing.

What do you attribute this lack of action to?

Understanding. The two don’t understand the issue. Look, as a street vendor, I don’t understand your administrative structure. I just want to do my work. It is my right as per the Constitution, and the Street Vendors Act also empowers me to carry on my livelihood.

Street vendors come under the category of unorganised sector workers. They are the only ones who attract customers. Waste pickers, taxi drivers and even auto rickshaw drivers are slowly finding themselves jobless. But here is a category of people who still bring in money.

In Karol Bagh, they removed a lot of vendors. Is there a dedicated space where vendors can still be accommodated?

Yes, of course, why not? It is just a matter of looking at the area.

Not at all. In fact, during court proceedings, lawyers representing the municipal corporations or the Delhi government will often say that TVCs are present in that locality and they keep meeting so this matter (of street vendors being harassed and evicted) should be referred to them. If you go to the TVC, there are no meetings and they don’t take into account the High Court order (which safeguards vendor rights).

And the TVCs are weak?

Is there a reason for absolving them of this responsibility?

It is a romantic notion of giving power to the people. More committees mean more people but it doesn’t work that way. I spoke to the adviser to the Chief  Minister who works on urban planning and affairs. The municipal commissioner has authority. The idea of putting this entity in charge of the TVCs was to ensure the concerns of the vendors are heard. The municipal commissioners would be made aware of the issues vendors are facing and the vendors would be able to approach them. That was the idea.

In fact, initially, the Delhi government was thinking of having as many as 72 TVCs. Thanks to our opposition, they brought it down to 29, but even 29 is of no help.

How many TVCs should Delhi have?

Around four or five: three TVCs of the three municipal corporations, one TVC for the NDMC and one for the Delhi Cantonment Board.

How many vendors does Delhi have?

And nobody has been registered?

In the past 20 years, they have not issued a single tehbazaari (licence to sell goods on the pavement). In fact, most Metro stations have been built on erstwhile vendor markets. They have just been evicting vendors systematically.

What would you like the municipal corporations and the Delhi government to do straightaway?

First of all, the harassment and eviction of vendors should stop. Second, until due process — the survey of vendors and proper functioning of TVCs — is completed vendors, beginning with those at the Jama Masjid and Karol Bagh markets, should be reinstated. There are already clear-cut court orders for Jama Masjid. As for Karol Bagh, UTTIPEC (Unified Traffic and Transportation Infrastructure (Planning and Enginering) Centre)  guidelines already exist.