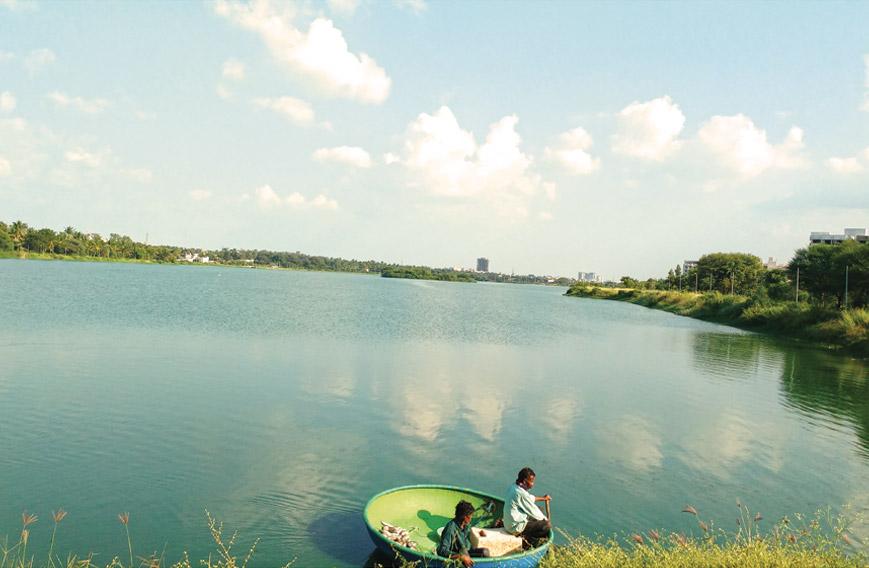 Life after death for Bengaluru’s lakes

It is a sizzling hot day, unusual for Bengaluru. Students of the Srishti Institute for Art, Design and Technology, as part of a design charrette, walk on the banks of a lake. Its shimmering sheet of water and cool breeze comes as a pleasant surprise.

For many students, this is their first exposure to the city’s lakes. Hopefully they will use their skills to improve the condition of lakes and draw the attention of the community to a very important local ecological asset.

This full lake is, however, not unusual in this northern part of Bengaluru. The Yelahanka Lake with a water surface area of 150 hectares too is full. Downstream of Jakkur lake is Rachenahalli which also has a good amount of water in its 50-hectare basin. Puttenahalli is a flourishing wetland with a large population of birds.

In a city where the dominating news has been froth, foam and fire in Bellandur, one of its major lakes, the existence of cleaner lakes for whose preservation citizen groups are active is omitted from the headlines. Yet, in the case of many of Bengaluru’s lakes, this has been happening for some years.

The ‘tanks’, as these man-made structures were called, have a hoary history. Built primarily for irrigation, they became part of the small town’s life. In 1895, Bengaluru, now a city, started to receive water from the Hessarghatta reservoir on the Arkavathy river and these tanks gradually started to become dissociated from the drinking water needs of the city. Agriculture continued to flourish in the command areas of many of the tanks on the periphery but a fast-expanding metropolis voraciously devoured atchkut or cultivated areas and, in many cases, the tank in these areas too.

In 1985 a committee was appointed by the state to look into the affairs of the tanks and their preservation. The Lakshman Rau Committee identified 262 tanks in the city and the surrounding green belt and laid out a plan for their protection at individual lake level, depending on status. However, not much action followed the report.

It took an NGO, the Environment Support Group, to file a Public Interest Litigation and then follow it up vigorously to wrest a landmark decision from the Karnataka High Court ruling against privatisation of the lakes, and ensuring their preservation. This was the Justice N.K. Patil Report.

Jakkur lake has become a symbol for what a city can do to manage its water-bodies in a fast urbanising environment. The principle called Integrated Urban Water Management is in practice here. A 10-million-litres-per-day capacity sewage treatment plant (STP) set up by the Bangalore Water Supply and Sewerage Board (BWSSB) is located just upstream of the lake. The treated water flows into a constructed wetland brimming with plants and birds, and then to the lake.

The wetland acts as a polishing pond, reducing nitrates, phosphates and heavy metals in the treated water. This cleaner water now enters the lake where algae further clean it. Fish are being bred and harvested in the lake and pelicans, painted stork and cormorants frequently visit it.

The lake itself is constantly full and overflows into a downstream lake called Rachenahalli. A small group of citizens formed the Jalaposhan trust to take care of Jakkur lake and have signed an MoU with the Bruhat Bengaluru Mahanagara Palike (BBMP).

Upstream of Jakkur, Allallasandra lake was a mess of debris and solid waste until a group called YUVA (Youth United for Voluntary Action) worked with the BBMP to clean it up, fence it, create a jogging track around it and a park, and erect lamp posts.

Yelahanka lake, further upstream, was also developed and filled up last year after several years. Rachenahalli lake has seen citizen action and cleaning up is underway.

Kaikondrahalli lake on Sarjapur Road, Puttenhalli lake in South Bengaluru  and Malathalli lake in West Bengaluru are some other lakes which have been rejuvenated by citizens and government coming together.

Despite all this work, the problems have not ended. Untreated sewage continues to enter the lakes, mainly through storm water drains, and sometimes results in fish deaths. Garbage also enters through the storm water drains and sometimes directly. The major storm water drains linking the lakes, called rajakaluveys, have been encroached upon and are yet to be cleaned of debris and sewage. While capital expenditure comes easily to the state, expenditure for maintenance is very low or non-existent. Coordination by the various institutions responsible for the lake is a big challenge.

The inability of the state to design an institution responsible and accountable for the catchment and the lakes is striking. The Lake Development Authority created in 2002 proved toothless. Its newly reimagined avatar, the Tank Development Authority, is yet to start functioning effectively and it remains to be seen as to how it will deal with lake encroachments and sewage inflow.

The model for lake rejuvenation in Bengaluru is becoming clearer by the day. The lake boundaries need to be identified and fenced. A buffer zone needs to be established. Sewage entering the lake must be diverted or treated in a decentralised STP meeting the standards for release into surface water-bodies. The water should pass through a constructed wetland before entering the lake. Separate arrangements must be made for idol immersion during festivals. Last, the lake should be treated as a common resource and not given into private hands.

Bharat Electronics Limited (BEL) is coming forward with a plan to build a 10-million-litres-per-day STP and help resuscitate the dying 50-hectare Doddabommasandra lake in the north of the city by filling it with treated waste water. Infosys, Wipro and Biocon are also reportedly coming forward with the same model of waste-water treatment plants, wetlands and lake rejuvenation.

In such joint action by citizen groups, institutions and the government lies the key to the preservation of the remaining lakes of Bengaluru — once famously called ‘city of a thousand lakes’.