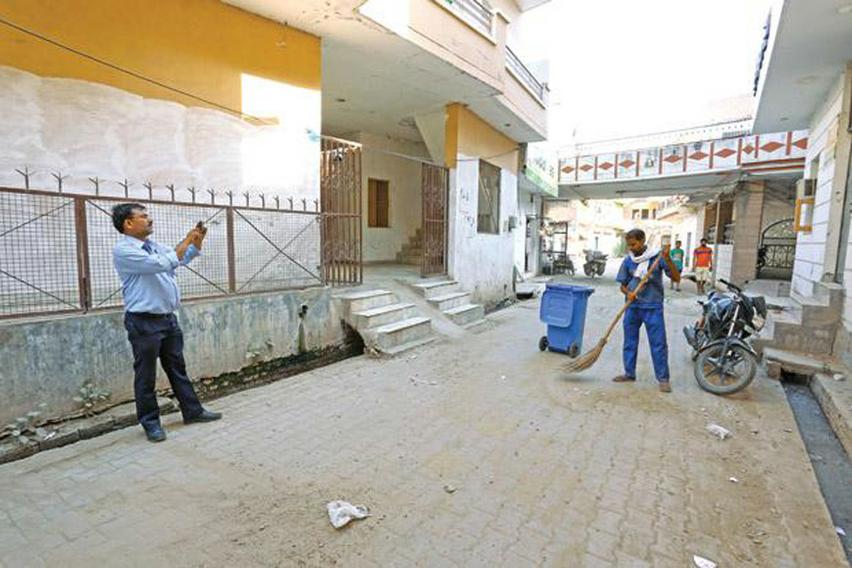 Mohali has been cleaning up its act. A toll-free helpline is available for citizens to lodge civic complaints. And now a mobile phone application makes it possible to report the exact location of garbage, potholes and fused streetlights. Additionally, the app allows for the monitoring of the work of sweepers on a daily basis — did they turn up for duty, how many are actually needed and where.

The Mohali Municipal Corporation, next door to Chandigarh in Punjab, launched the app in November 2013 and since then just 800 complaints have been lodged. It is a small number, but a beginning has been made. Mohali’s population is just 146,213 and it is hoped that word will spread.  The app not only takes in the complaint, but also passes it on to the relevant department and officer and simultaneously informs the complainant.

The result is that citizens’ expectations in Mohali have begun rising. They want action. The Mohali Municipal Corporation has also been nudged into being more proactive. Its use of the app to monitor sweepers has resulted in a control room keeping live watch on sweepers as they go about their work.

The corporation’s officials are already beginning to enjoy the rewards of these improvements in civic management.  The corporation received the Order of Merit at the Skoch Good Governance Awards this year and it was at a stall at the India Habitat Centre that we first came across Sanjay Kanwar, SDO of Mohali, and Jaskirat Singh, CEO of Webrosoft Solutions.

Called CRAMAT or Citizens’ Reporting and Mapping Tool, the app has revolutionised the way complaints are filed. All you need is a smart phone. You download the app, register yourself, select your location and from there on you are just a click away from the municipal corporation’s office. The app allows you to take a picture of the problem and upload it on one of 10 categories. You can write a brief description, which is optional, as the picture and the GPS location are already recorded. You immediately get a confirmation SMS and email that your complaint has been received. Once it is verified that it is not spam, the complaint gets automatically assigned to the officer concerned through SMS and email with the complainant also getting the name and phone number of the officer.

After the problem has been tackled, the complainant can mark it CLOSED or the officer RESOLVED. If the status is not changed after 15 days a reminder mail is sent to both complainant and the concerned officer. So CRAMAT is a foolproof way of filing your complaint and getting it heard.

CRAMAT is one step better than a toll-free number because it provides a picture, a location and keeps the complainant in the loop. The traditional way of filing complaints at the municipal body’s office stands nowhere in comparison.

Still, so far, more complaints are received through the toll-free number, but the Municipal Commissioner, Uma Shanker Gupta, says: “Applicability and convenience of this app is more. It’s a 24x7 app as compared to a toll-free number available only between 9 am and  4 pm. We also get the photograph showing the exact problem and the exact location and as the complaint is automatically assigned to the officer, it’s easier to keep track. It makes the officer more accountable.”

Amandeep Kaur, the operator who handles both the toll-free number and CRAMAT, also finds the app more efficient. “Sometimes the caller is not able to tell us the exact location or describe the situation but with CRAMAT there is no such issue.”

CRAMAT’s early users have their share of disappointments. A complaint goes out in a matter of seconds, but there are delays in attending to it. One reason is that there are multiple agencies involved. Also, while the app raises expectations, standards of governance don’t match.

Ishwar Babbar, a businessman, used CRAMAT to file a complaint about streetlights in his area not working.  “My complaint was attended to twice. On both occasions, the streetlight worked for just a day. I then visited the corporation’s office personally and was told the power cable needed to be replaced and it would take time.”

GP Singh and Karan Pal Singh, both retired government officials, feel the app is a step closer to improved services. They say: “The municipal corporation reacts quickly to the complaints but whenever there is the involvement of another agency the problem takes much longer to resolve.”

Ramandeep Singh, a businessman, says, “The app is perfect but, you know, there should be someone sitting to deliver results also.”

Commissioner Gupta says, “There is a time- frame for resolving every issue. For garbage its one day, for streetlights its two days, and so on. We maintain a data bank of all the complaints and we make sure that  officers attend to complaints in the specified time. But there can be a genuine reason for delay. Also, there are some complaints that are not in our jurisdiction like horticulture.”

Gupta says there are several issues that the corporation is working on. Complaints that go to other agencies tend to take time. There are also complaints on which the corporation can take only limited action. “ For instance, we can only sterilise stray dogs. We can’t keep them,” he explains.

“Mohali has educated and aware citizens. In a short time they have adopted this technology to lodge complaints on a regular basis. In the corporation we have fixed responsibilities on departments.  But there are constraints. Garbage and street lights get attended to quickly but fixing roads takes time,” explained Kanwar, SDO of Mohali.

The app has worked very well for tracking of sweepers. In Mohali, at every kilometre you can find a sweeper in a blue uniform, equipped with a broom and international quality wheeled bins. Each one of them is monitored by a team sitting in the control room on the third floor of the municipal corporation’s headquarters.

The sweeping of roads is outsourced to a company. The Commissioner insisted that the company ensure accountability by using the app. Earlier, it was impossible to track nearly 700 sweepers or to know which roads had been cleaned. Now both are easily done, resulting in savings and efficiency.

Jaskirat Singh explains: “Now the field officers of the company having the contract need to click the picture of the sweeper. The picture and the location of the sweeper is then with the control centre. The picture authenticates the location and also tells us whether the area is clean.  This information is displayed on three screens. In the first you can see green and white balloons on the city map. Green means the attendance is marked. In the second you see a pink balloon and streets with different colours. The colour scheme is used to identify the area under the sweeper and by clicking on the balloon you can see his latest pictures with all details. In the third you can see live streaming of the photographs.”

Earlier, five to six sweepers used to be assigned to a sector. Now one sweeper is assigned to a stretch of road. It is more efficient. Earlier, two sweepers were used to pull the cart carrying the garbage and four would do the sweeping. Now the company has wheeled bins with only one sweeper for a stretch. The bins are handled by another team so all the sweepers are available for sweeping. Also as attendance is marked with a tracking system, and there is only one sweeper for a road, there is no scope for claiming more sweepers than are being actually deployed.

Bakshi elaborates: “It’s not right to consider the tracking system only a tool for marking attendance. Assigning one sweeper one stretch of a road creates a feeling of ownership in the sweeper, making him more responsible. It’s not out of fear that they are doing their job.  A sweeper understands his area and its varying needs. Residents now also see a person in uniform coming daily to their area. This system has brought in stability.”

Webprosoft Solutions is a young company based in Ludhiana. Its CEO, Jaskirat Singh, tells us the idea originally was to create an application for identifying cancer patients across Punjab. It was needed for a study which intended to place cancer patients on a map of the state and correlate the prevalence of the diseases to specific conditions in those areas.

The app ensured accuracy as the researcher would establish the location via GPS and take a picture. But the government-funded study finally decided not to use the app — perhaps because it was too accurate and gave a worrisome picture of cancer in Punjab.

Webprosoft then converted the app into a tool for citizens to report civic grievances.  R.S. Verma, the Commissioner of the Municipal Corporation in Jalandhar, was the first to show interest in it.  Mohali followed when Commissioner Gupta heard about it. Verma has since been posted to Chandigarh and little seems to happen now with the app in Jalandhar.

The app also has wider uses. It can, for instance, be used for tracking large infrastructure projects, points out Jaskirat.