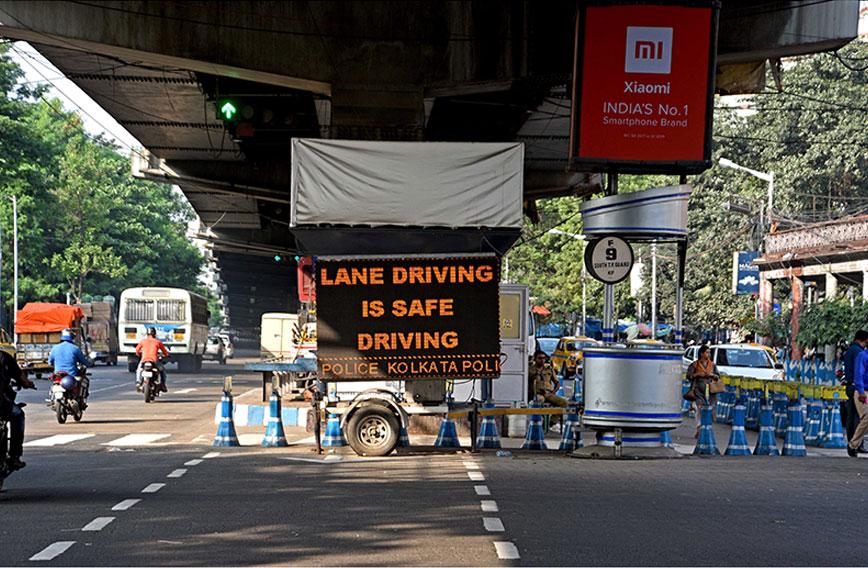 There has been a remarkable fall in road accidents in Kolkata and the rest of West Bengal since 2016 which is reflected in the tally of fatal accidents. This has been enabled by a special campaign involving the four ‘Es’ of  education, enforcement, engineering and emergency. But new attitudes need time to take root and what has worked most till now, say road users, is stricter policing and rigorous levying of fines.

In the case of Kolkata, fatal accidents fell by 5.8 percent in 2016 over the previous year and then again in 2017 by another 18 percent. Thereafter, in 2018 they fell by a further 11 percent. Cumulatively, during the 2015-18 period, fatal accidents have gone down by a massive 31 percent.

The figures over the past two years (2018-19) indicate a plateauing but that is to be expected as after an initial sharp decline when a new regime is introduced, the same pace cannot be maintained continuously. 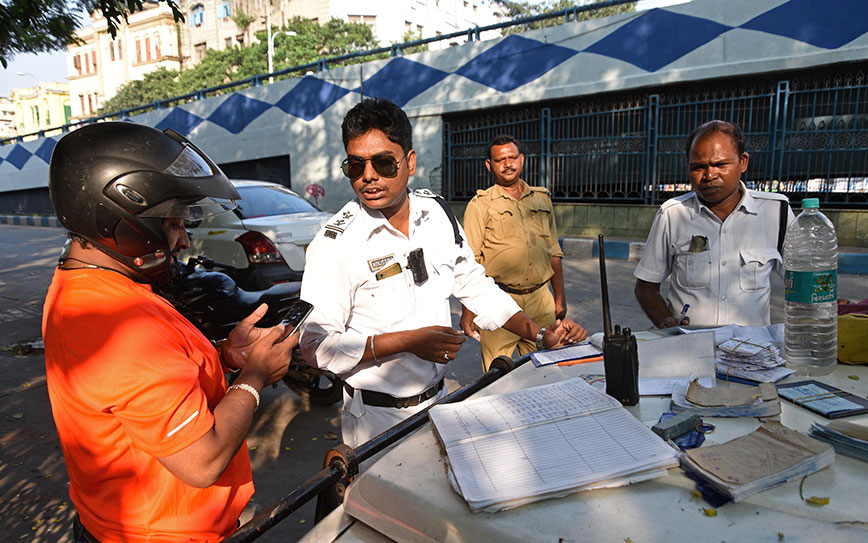 This fall in road accidents in West Bengal has been attributed to the launch in July 2016 of the highly visible campaign “safe drive save life” which is supposed to be Chief Minister Mamata Banerjee’s idea. The full picture is that the chief minister set the ball rolling by according high priority to improving road safety. The actual campaign was devised on ideas which came from across the board — police officers working with communications agencies.

The result of this is that the idea of improving road safety has caught on with the police. Earlier, the police took road accidents to be “monocausal” (the result of a single cause) — traffic rule violation — explains Vivek Sahay, additional director general of police, traffic. Breaking traffic rules was a criminal offence (though a petty one sometimes) and when that happened the police began investigating, looking for motivation or cause. But now the emphasis has shifted to promoting safety on the roads.

The campaign for road safety launched in West Bengal has resulted from “reducing deaths and injuries from traffic accidents” being adopted globally in 2015 as one of the Sustainable Development Goals. To take this forward the Union transport ministry has channelled to the states funds received from the World Bank and the Asian Development Bank for the purpose.

These additional funds have made a big difference to the states though they represent a minuscule portion of the funds spent each year by the states and the centre on building roads. In the case of West Bengal, enforcement support funding to the police from the state government rose from `3-4 crore in 2014-15 to `75 crore in 2017-18.

Emphasis on education has resulted in a huge rise in school visits by police to carry forward the message on road safety. Road safety campaigns have been held by the police in both Kolkata and across West Bengal round the year. Counselling is done for drivers segregated into different categories — like those of buses, ambulances and so on — as their roles are different.

As for enforcement, it is the job of the long arm of the law. Police enforcement of traffic rules is today far stricter. This is starkly visible in Kolkata where there has been a sharp rise in policemen and police motorbikes at innumerable street crossings and an equally sharp rise in levying of fines for violations — issuing of challans.

Earlier, in West Bengal districts the sole focus of the traffic police was to address congestion, particularly during festivities. Now it covers policing the entire range of traffic offences. Compared to the earlier minuscule staff strength to address traffic issues, today the deployment is far bigger. Earlier, the West Bengal police had no guidance on traffic. Today there is a far bigger budget to support more manpower and the cultural challenge of changing the mindset of road users is being actively pursued. 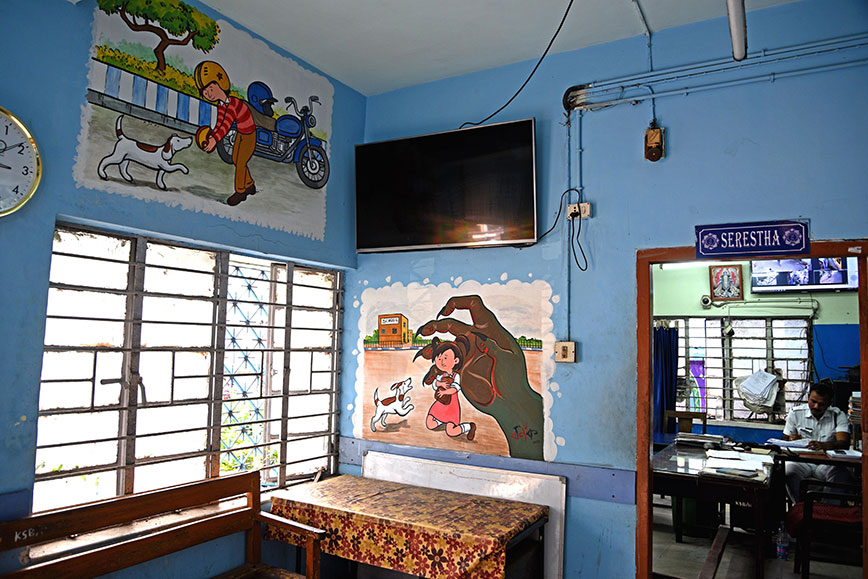 A police station with colourful posters | Photograph by Ankit Datta

The engineering initiative has resulted in better and more CCTV cameras being used. Breathalysers have been introduced in a big way to check drunk driving. Electronic guns are being used to check over-speeding. Vehicle speed is being played back to drivers through roadside digital electronic displays. As a result, a great deal of digital traffic data is being captured today, enabling analysis and learning. This helps identify accident blackspots and engineering specific solutions for them.

But there is still a key deficit. There is little progress in engineering roads to ensure traffic safety. For example, when the Kolkata Metropolitan Development Authority or the PWD builds a road, does it have traffic safety in mind? A key flaw which still survives is roads being designed keeping in mind the needs of motorists and not pedestrians and two-wheelers, to say nothing of cyclists.

The fourth leg in promoting road safety, emergency, has resulted in a programme to educate those working in stalls like eateries along highways to give first-aid, including artificial resuscitation, to trauma victims and do all else that is necessary to get a victim to the nearest medical centre. Kolkata has a new set of trauma care ambulances called Karma which can be called through the traffic helpline. What needs urgent attention is the capacity and quality of health facilities along highways passing through rural areas.

Outlining the technological changes that have taken place, most prominently in Kolkata, Pandey Santosh, deputy commissioner, traffic, Kolkata Police, contrasts then and now. Then, traffic violation notices were sent by post. This has been digitised. Now a case is registered on the spot through a mobile application, traceable at the central server. The person being prosecuted immediately gets a feedback through an SMS.

Now there are a lot more CCTV cameras, 1,600 for traffic, making monitoring easier. There are speed cameras functioning at 40 locations and RLVD (red light violation detector) cameras. All are automatic number plate reader cameras. So there is no need for human intervention. A violation is automatically registered and intimation goes to the person concerned through the registered mobile number. At the control room, a group keeps a watch on the overall situation through CCTV cameras and prosecution is launched there itself.

Now there is a programmable signalling system which can synchronise all traffic signals in an area for intervention from the control room to smoothen traffic flow and reduce waiting time at signals. Signage and road markings have been improved.

Road users affirm that the use of information technology to promote road safety is very much a work in progress. Reengineering roads to create bicycle tracks is yet to begin in Kolkata, not to speak of the district towns. Outside of Kolkata, progress itself negatively affects road safety at times. There has been a huge rise in expressways over the years which have created hazards for rural people not used to negotiating wide roads with speeding cars.

Educating the public has a long way to go. Unnecessary honking is the rule rather than the exception for most drivers. The police is trying to ensure that those who ride bikes wear helmets but there also compliance is low.

The police itself has a long way to go. At many important crossings there is confusion because several policemen try to do a good job by manually controlling traffic while simultaneously the traffic lights are kept on. Drivers get confused when they find traffic policemen manually asking them to do one thing but the traffic lights signal something different.