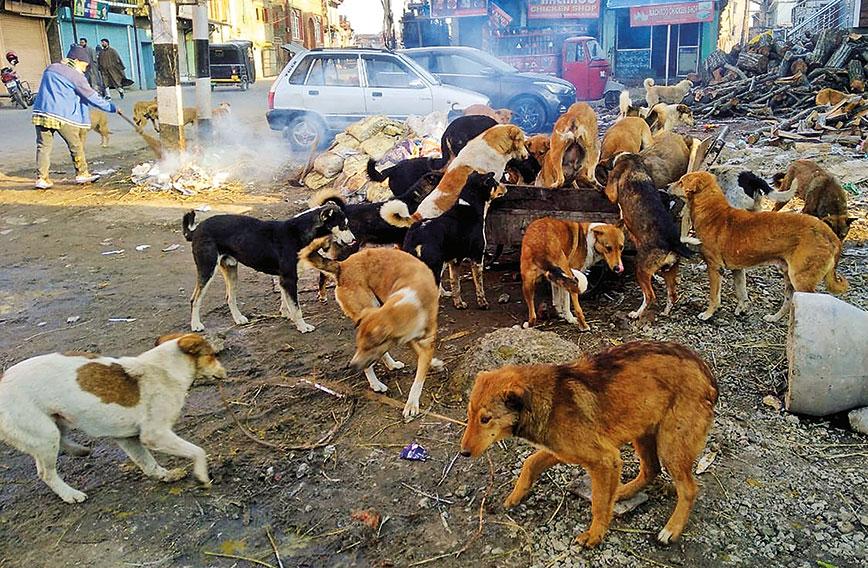 Stray dogs have Srinagar on edge

SRINAGAR is vying to become a smart city so that it can attract tourists and investment. The administration has initiated many development projects too. But one civic issue is haunting civic agencies and residents and casting a shadow on the overall image of Srinagar — the stray dog problem. The presence of dogs everywhere is making the lives of people miserable.

It is the elderly and children who worry the most over the presence of dogs in their areas. First of all, it restricts their mobility. Residents say they are not able to go about their  daily chores and at times have to change either their route or their plans because of strays.

“I used to go to the masjid at dawn to offer prayers, but the presence of dogs has forced me to change my plan. I now offer my prayers at home. I don’t feel satisfied about having to do this. The administration seems least bothered about the issue,” says Abdul Rehman, a resident of Soura.

According to official data of the 2011 Census, Srinagar had a dog population of 60,000. But current unofficial figures point to the population of dogs being around 90,000 or even more.

Over the years the Srinagar Municipal Corporation (SMC) has failed to stem the dog crisis. The municipal corporation has not been able to sterilize the required number of dogs to keep the population of canines in check. City residents as well as those living on the outskirts are left to cope with the problem.

“The SMC higher-ups had claimed that they would be carrying out dog sterilization full throttle and that the population of dogs would begin to decline. Years have gone by but the ground situation seems to have changed very little. The whole process of sterilization has gone awry with very few dogs being sterilized at designated centres,” says Mohammad Maqbool, a resident of Nowpora.

People living on the outskirts of Srinagar have a different story to tell. They say that officials of the SMC ferry the dogs from the posh areas of the city in the municipal corporation trucks and then deposit them in their areas. These people say that it is due to this reason that dog attacks have increased in areas falling outside the municipal limits of Srinagar.

“People living in some of the posh colonies of Srinagar are highly influential and have a say in the working of the government. These influential people pressure the officers of the SMC who in turn pressure the line staff. Following this, the canines are transported from posh areas to less privileged areas,” claimed Abdul Majeed, a resident of Dangarpora, a suburb of Srinagar.

In the past  decade or so there has been an increase in dog attacks not only in Srinagar, but in other parts of the Kashmir Valley as well. There are regular media reports of dog attacks on people in some locality or the other. Children are the worst sufferers in this regard.

“My children fear coming out of the house since they apprehend that they might be attacked by dogs. As such I don’t allow them to go out alone. I always accompany them as and when they want to venture out. Although my son is fond of cycling, he cannot ride his bicycle on the road, fearing attack by the canines,” said Shakeela Bano, a resident of Bohri Kadal.

There are people who believe that the dog population has increased in areas where there are camps of security forces personnel. They say that the left-over food from these camps is given to stray dogs.

But SMC officials at the lower rungs of the administration seem helpless. They say such decisions have to be taken by higher officials in the municipal corporation. Some old hands say that in the past dogs used to be poisoned.

“Since we cannot poison the canines now, the only option is sterilization. If we are able to control the population of dogs, half the battle is won but for that we need strong resolve from the civic body. Once the population is controlled there would be fewer attacks on people and everyone will heave a sigh of relief,” said Shiraz Ahmad, a safai karamchari of SMC.

The SMC has partnered the Faculty of Veterinary Sciences & Animal Husbandry of the Sher-e-Kashmir University of Agricultural Sciences and Technology (SKUAST-K)  to  jointly implement the dog sterilization programme in Srinagar city.

But this is not enough because there is only one centre and 10 surgeries per day are being carried out. It is necessary to have many more sterilizations.

Mattu says currently the SMC provides funds, manpower and vehicles for transportation of stray dogs while faculty  members of SKUAST-K perform the sterilization surgeries. In is necessary to increase the scale of the programme.

“To stabilize the dog population, we need to increase the sterilization rate to at least 120-130 sterilizations per day. To achieve this target, the SMC is establishing two more ABC and AR centres within Srinagar at Tengpora and Chhaterhama," says Mattu.

"We have also outsourced the ABC programme and AR vaccination programme. We are going to perform mass dog sterilization surgeries in Srinagar,” the  mayor says.

To be effective in all 35 wards of Srinagar, an agency by the name of Santulan Jeev Kalyan has been appointed, he explained.  An increase in outreach is expected to make the programme more effective and deliver quicker results. Ward-level stray dog management committees have also been formed for those areas that are within the municipal limits of Srinagar.

“We don’t have correct figures regarding the dog population. It is assumed to be around 60,000. But to have a more reliable figure, the Santulan Jeev Kalyan has been tasked to conduct a census, which will be completed in two weeks," the mayor says.