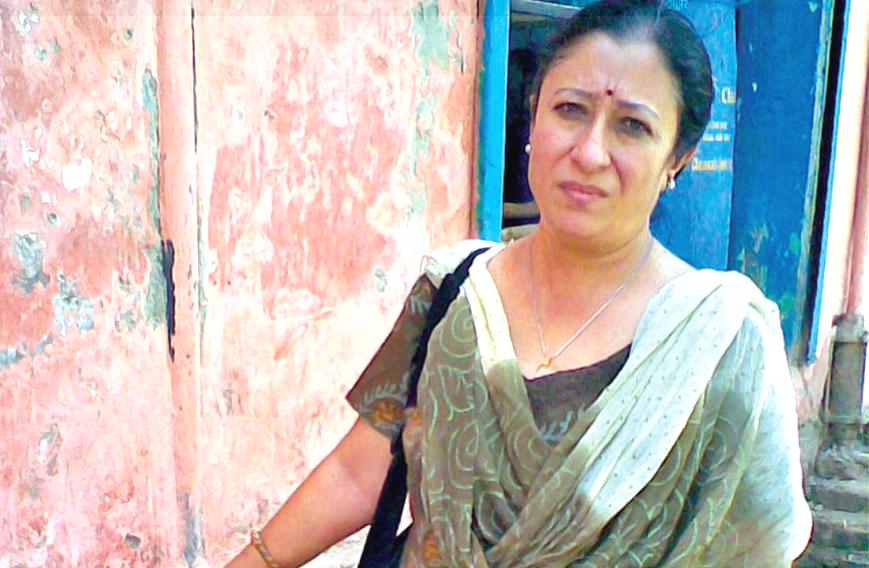 For over 50 years Shantaben Hiraghar furtively used a clump of shrubs as a toilet. She lived in Kailashnagar, a dirty slum in Ahmedabad. “I used to team up with other women to go,” she explains. “It was most distressful.”

Life changed dramatically when she moved into Gokuldham Cooperative Housing Society in Meghaninagar. Shantaben now has a small flat with a bathroom and kitchen. “Sister, our homes are a real blessing,” she says. “We even have running water. SEWA Bank lent me money to set up my small shop selling snacks. Our lives have changed.”

In 1992, SEWA (Self Employed Women’s Association) Bank noted that around one-third of loans taken by their women workers in the informal sector were used for housing. Nearly 80 percent of these loans was spent on building toilets and drains and getting an electricity or water connection.

“The first demand of our SEWA Union, almost four decades ago, was for housing. We realised its importance for the women who slogged all day on the streets,” recalls Ela Bhatt, SEWA’s charismatic founder. “However, we did not have the resources then, nor the clout for such an ambitious project. Besides, we were involved in bettering our members’ status.”

Realising this need, in 1994 SEWA Bank set up the Mahila Housing SEWA Trust (MHT) to help the women improve their homes and surrounding infrastructure. It is today the biggest provider of loans and assistance to low-income women in the housing sector.

“We have managed to change the quality of lives of over 300,000 families across the country,” says Bijal Brahmbhatt, MHT’s enthusiastic director and the moving spirit behind this transformation.

“My father, an academic, introduced me to Renana Jhabwala of SEWA in 1998. She immediately invited me to join the three-year-old Mahila Housing Trust. It was an honour,” beams Brahmbhatt.

A civil engineer, Brahmbhatt realised she would need to diversify her skills. Providing housing and infrastructure to women living in slums transformed her into an architect, an empathetic social worker and a skilful negotiator.

Women in the SEWA Union were keen to improve their homes so that they had space to keep their goods and could work from home. Mostly, they were agarbatti workers, garment workers, street vendors, domestic workers or construction workers. MHT began talks with the Ahmedabad Municipal Corporation (AMC). After a lot of back and forth, the municipality agreed to upgrade slums under the state government’s Slum Networking Project for the urban poor.

The project was for slum-dwellers living below the poverty line (BPL) on public land that belonged either to the government or the municipality. The AMC floated tenders for building three- to four-storied housing blocks and offered extra Floor Space Index (FSI) and Transfer of Development Rights (TDR). This attracted builders.

Meghaninagar, where SEWA’s 12,000 members lived in 50 slums, negotiated with the AMC. “This was where we began. I was exposed to multiple actors,” says Brahmbhatt. “Providing primary civic amenities including water connections and toilets to individual homes, and basic infrastructure were a great challenge indeed.”

But what sort of homes did the women want?

“We held several meetings with Bijal and officials from the AMC,” says Shantaben with considerable pride. The women finally settled for apartments with a carpet area between 36 square metres and 50 square metres. Each apartment has two rooms, a kitchen, bathroom, toilet and a chokdi — a small open space outside the kitchen where utensils and clothes are washed.

The slums they were living in were demolished. The builders gave each of the families between Rs 2,000 and Rs 10,000 per month as rent until the project was completed.

The apartments cost approximately Rs 5 to Rs 7 lakh. Under the state’s slum development policy of 2013, in exchange for enhanced FSI and TDR, the apartments were given without charge to the women. The government provided Rs 8,000 to each of the women which they could use for building toilets, drains or getting an electricity or water connection. Around Rs 2,000 of this amount was given as loan. 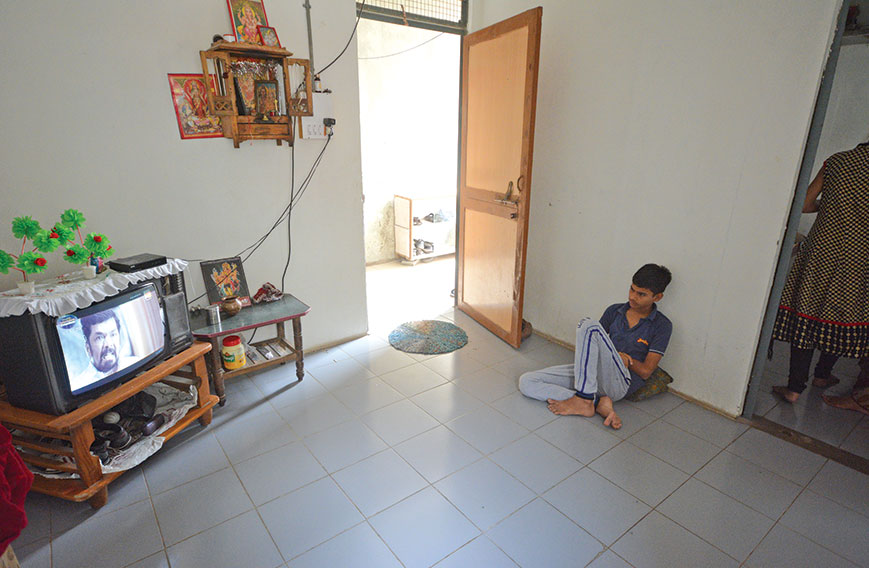 The living room in one of the apartments

Around 3,600 such units are being built across Ahmedabad. Each family pays the annual maintenance cost plus their water and electricity bills.

The AMC built the infrastructure — sewage connections, paved roads, storm water drains and all other civic facilities including running water and dedicated electricity.

The three-storied buildings built on the demolished slum have trees around and space for children to play. “My building complex has 66 members and is located on the main road near the bus stand. Even the schools are close by,” says Shantaben.

MHT insisted that housing titles would be given to the women. “They asked for them. But titles will be transferred to the women after five years of occupancy, according to government rules,” clarifies Brahmbhatt. All the housing complexes have the names of the women on a board.

With shining eyes Roshanben, Harshaben, Kanta and Ayesha say they have their own toilets and running water. “I am more productive now,” says Roshanben. “I finish my work quicker and send my children to school on time. Guests are very comfortable in my house.”

“Working with SEWA I saw liberation of women in practice,” says Brahmbhatt. “We have a development approach combined with activism. It works as a wonderful bridge between the government and poor people.”

An added advantage for the women was that SEWA introduced a six-month course on basic construction skills. Those women who were already working as construction labour were helped to upgrade their technical skills and become masons. 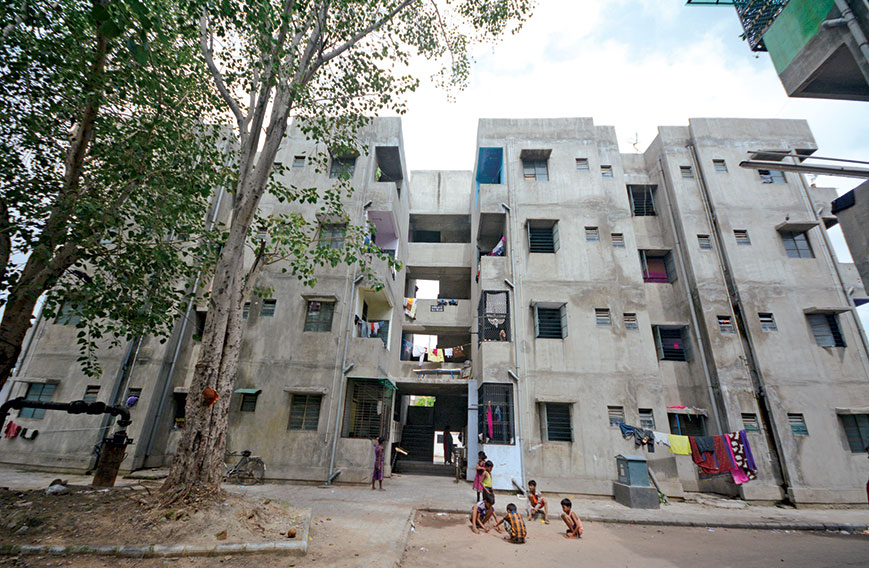 The apartment blocks have trees and spaces for children to play

“Starting with housing in Ahmedabad, we have upscaled to 5,467 women with housing titles in seven states: Gujarat, Rajasthan, Delhi, Madhya Pradesh, Bihar, Jharkhand and Odisha. We have reached 300,959 households and served 895 slums, installed 45,000 toilets and trained 9,027 construction workers. Among public finances, we accessed Rs 180 million for poor women. We have got Rs 4.3 billion worth of registered property titles,” says Brahmbhatt who has received international recognition for her dedicated work. She was awarded the Women Change Makers Fellowship in 2015 for three years by Switzerland’s Womanity Foundation. The MHT is part of the Clinton Global Initiative.

“I was amazed that our housing project for women received the Dubai Best Practices International Award in 2006 and CNN aired it in their International Transformation series,” says Brahmbhatt with all modesty.