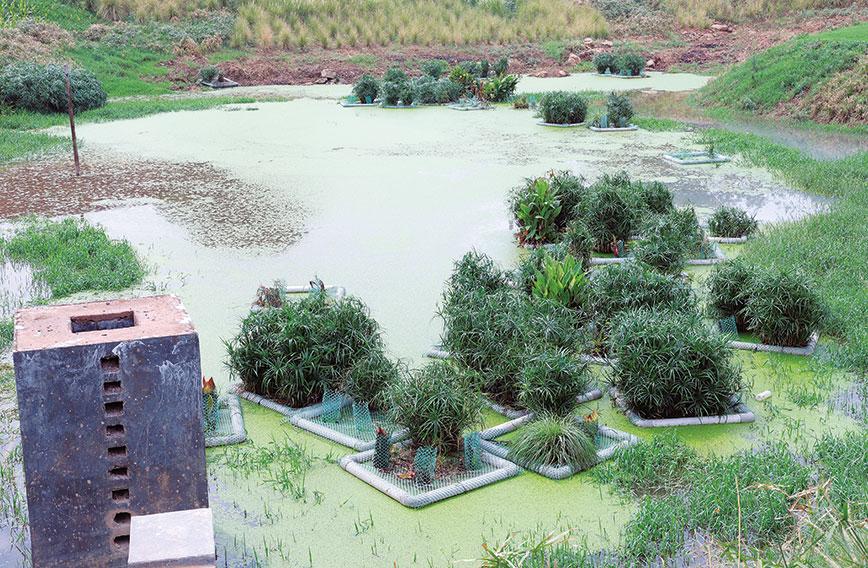 Rajokri's lovely wetland is also the STP it needs

A natural facility created at a cost of just Rs 1.8 crore is treating 600,000 litres of sewage each day at Rajokri, a village on the border of Delhi and Gurugram.

This innovative project is a solution for cities struggling to deal with the problem of wastewater and not having the money to set up expensive sewage treatment plants (STPs).

A traditional, mechanised STP gets built for anything between Rs 7 to Rs 62 per thousand litres of sewage to be treated. In contrast, the natural system at Rajokri comes for just a little over Rs 1 per thousand litres — Rs 77,19,499 for the treatment part of it and Rs 92,47,788 for the architecture and landscaping. 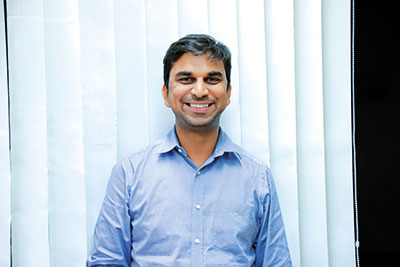 Led by Ankit Srivastava (left), an environmental engineer and technical adviser to the Delhi Jal Board (DJB), the project was personally monitored by Chief Minister Arvind Kejriwal. It is an example of what can be achieved through political will and scientific inventiveness.

The Rajokri pond is the DJB’s pilot project, a template for an ambitious task it has set itself — to revive 159 water bodies and create six new lakes that will  raise plummeting groundwater levels in the capital city. The rejuvenation of the Rajokri pond is the first step. The DJB started working on it in 2017.

Rajokri is in a peri-urban locality close to the Delhi-Gurugram border. It suffers from the usual intractable problems associated with unplanned expansion — illegal constructions, encroachments, dumping of waste and local interests resisting change.

All these have been successfully dealt with to transform a derelict pond into a thriving water body, which has also become a recreation spot where the young and old can happily go.

All work on the ground was undertaken by the Irrigation and Flood Control (I&FC) department while the intellectual manpower was provided by the DJB. “On-ground execution, monitoring and troubleshooting were handled by the I&FC,” says Srivastava.

The DJB drew up plans, consulted experts and estimated costs. No aspect of the plan was outsourced. But, in a departure from set norms, the DJB approached the National Green Tribunal (NGT).

“When we finished designing the entire project and before starting work, we took our plans to the NGT. We explained what we wanted to do and asked if the NGT had any recommendations for us or any objections,” says Srivastava. “This is probably the first time that suo motu (on its own) a government department has approached the NGT. asking for approval and their inputs.”

The DJB’s first step was to clear the pond of historical waste. Dirty water was drained and the sludge that had settled at the bottom was removed. Initially, encroachers were obstructive and hostile. The I&FC faced problems getting excavation machines to the spot and transporting waste.

PLANTS AND A WETLAND

The Rajokri system recreates a wetland based on a model developed by the National Environmental Engineering Research Institute (NEERI). As in a wetland, the system uses stones, plants and microbes to treat water. The DJB chose this method because it is inexpensive and requires little maintenance. Just one person is required on-site to ensure the system works.

The system is divided into two units — the bio-digester and the constructed wetland. Earlier, many small drains would weave their way into the pond. Now, pipelines have been put in place to ensure the waste from the drains leads to a large drain, which in turn goes into the wetland system.

There is a mesh to filter out plastic and other material before the wastewater enters the drain, which leads into the underground bio-digester where finer solids, which haven’t been caught by the mesh, are treated. This is done by allowing the water in the bio-digester to stay stagnant for a while before moving on. Gravity does the rest. Fine faecal matter, crushed organic solids, sand and small stones all eventually settle after the water has been resting for a while.

The artificial wetland cleans up the remaining 40 percent of impurities that remain in the water. Dissolved pollutants include heavy metals, kitchen waste and urine. The water passes through the gravel bed, which winds in a zigzag fashion and moves up and down thanks to the engineering of the system. It is important to design the wetland this way to prevent flooding in the system.

Within the gravel bed, unseen to the naked eye, there is a multitude of reactions that happen simultaneously. First, physical filtration. Due to the gravel, any solids which weren’t caught in the bio-digester are filtered. The gravel ensures that pollutants like heavy metals stick to its surface. Specific microbes form a bio-film on the surface of the gravel and consume the pollutants.

Different chemical reactions also take place which help in the reduction and removal of nitrate, ammonia, phosphate, heavy metals, antibiotics, pesticides and even old medicine as these are often flushed down the toilet by people. 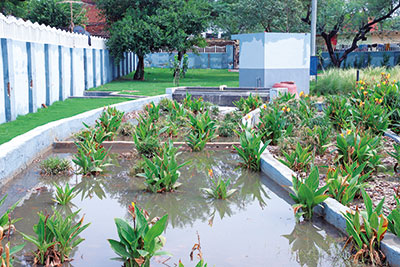 There are plants(right) at regular intervals in the gravel bed which act as another filter in the wetland. These plants, like yellow canna, red canna, spider lily, cattails, common reed, pampas grass, elephant ear, soft rush and bull rush, are found in natural wetlands. They deal with bacteria through a natural process.

Biochemical oxygen demand (BOD) is used to gauge the effectiveness of a water treatment plant. A higher BOD indicates a high volume of pollution. At Rajokri, wastewater enters at 250 BOD. Once it has gone through the bio-digester, the BOD level drops to 120. After the water has gone through the constructed wetland and is released into the pond, BOD levels drop to 20, the target figure that the DJB had set for itself.

The DJB plans to lower the BOD even further so that fish can be put into the pond. “We’ve been instructed by the chief minister to polish the water further, so we will be taking the BOD from 20 to 5. The legal norm is 10, but we will be lowering it much below that,” said Srivastava.

To do so the DJB plans to reduce phosphate in the water. That will prevent algae from growing. The current standard, according to the law for phosphate discharge in treated water, is two whereas the DJB plans to bring it down to less than one.

According to DJB estimates, between 20 and 30 percent of treated water percolates to recharge groundwater. Treated water is also used for horticultural activity around the water body. The Rajokri water body and the 9,000-square-metre area which constitutes the Rajokri Lake Revival Project is the only green patch in the surrounding area.

THE UPSIDE OF REVIVAL

What came as a surprise to the DJB and to Srivastava was that the local community decided to involve itself in the redevelopment of the water body. “While work was in motion, the community came forward and requested us to create a partition wall between the main water body and the amphitheatre we had created,” says Srivastava. They wanted to keep a part of the pond for performing Chhath Puja. Keeping in mind local sentiments, the wall was built.

Interestingly, prior to redevelopment, residents would use sewage water in the pond for Chhath Puja. “There was a psychological barrier,” remarks Srivastava. “They didn’t want to use treated sewage water for religious reasons though before that they were okay with conducting their ceremonies in raw sewage.”

There have been other desirable outcomes. There is no stagnant water which means that mosquito breeding has been eliminated. The pond no longer smells and no sewage is visible. Thirteen to 15 species of birds have returned to the area. 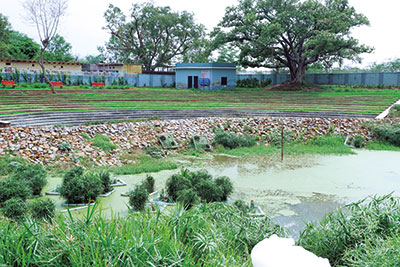 Apart from the well-manicured garden, landscaping has been designed to prevent flooding. Rain gardens on two ends of the pond ensure that water drains into the pond. Bioswales, which are architectural elements designed to remove debris and pollution from rainwater while directing it into the pond, have been added. In addition, a tender has been released by the DJB which includes provisions for a children’s play area, an open gym for adults, funds to hire a security guard, a gardener and even cleaning staff.

The community has taken to the redeveloped place quite actively. Forty-three-year-old Ram Kumar comes to take care of the plants at the Rajokri pond every day. “I’ve been coming here ever since they finished the redevelopment work. If we as a community don’t take care of this place, then it’ll go back to being the way it used to be. I don’t want that to happen.” The pond has become a recreation spot for both young and old.

This is exactly the kind of impact that the DJB was hoping to achieve. “Like our mohalla clinics and mohalla sabhas, the pilot aimed to empower citizens to run their own civic facilities,” says Srivastava.

He is most proud of the fact that the DJB has proved that rainwater harvesting and groundwater recharge in an urban area can be done. What is also impressive is that though the I&FC had never constructed an STP or worked on a water revival project, it plunged into the task and implemented it successfully with the DJB.

Going forward, the kind of sewage system to be built will be determined by the size of the water body. “In Timarpur, we’re creating an STP that will take care of 35 million litres per day (mld) of raw sewage. In Rohini, we are creating a 67 mld wetland,” says Srivastava. n