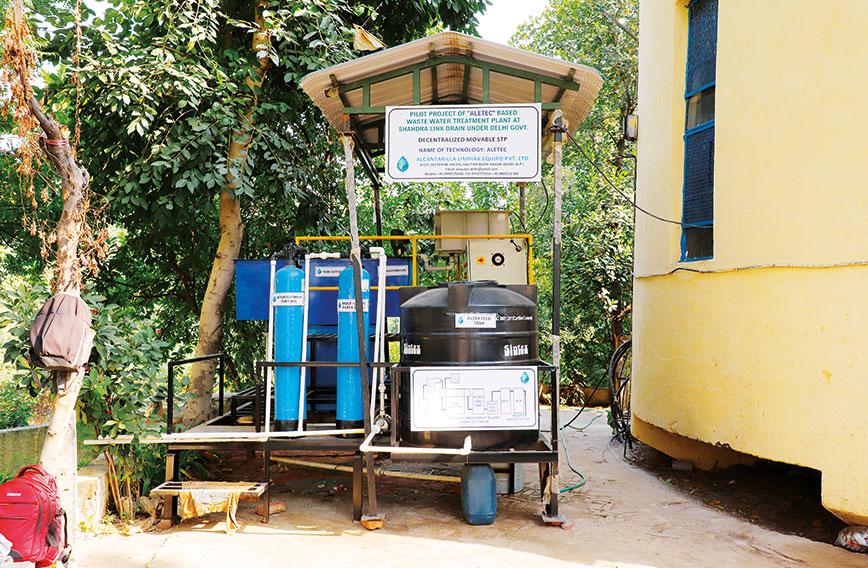 Sewage and factory effluents flowing into the Yamuna through a drain in east Delhi are being innovatively recycled so as to protect the river and prevent contamination of groundwater.

In the first intervention of its kind, the DJB is using a technological process provided by a startup, Alcantarilla Limpiar Equipo. The initiative is still at a pilot stage on the banks of the Yamuna near Akshardham.

The effluents are being cleaned to the extent that they can be reused and in the future, even made safe to drink. At the very least, the treated water will cause no pollution if it were to flow into the river or go into the ground.

The Shahdara Link Drain, as it has come to be known, begins its four-km journey to the Yamuna from the railway tracks near NH-24. It winds its way past unauthorised colonies which dump their sewage via a single stormwater drain into it. Although these colonies were regularised and sewer lines were laid, many households do not use the sewers. Additionally, effluents and muck pour in from small factories and illegal slaughterhouses.

Ankit Srivastava, DJB’s technical adviser, explains the purpose is to protect the Yamuna from the onslaught of waste from urban areas. There is also concern that groundwater quality is rapidly deteriorating. Many colonies in east Delhi depend on groundwater. The DJB also supplies water it draws from Ranney wells close to the Yamuna. 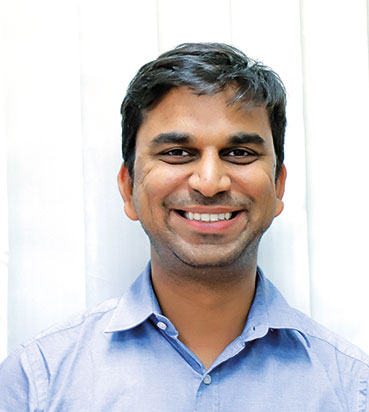 Mayur Vihar, a middle-class residential colony located here, is facing a water crisis. “In the last three or four years water quality has really declined here,” remarks Srivastava.  “The Totally Dissolved Solids (TDS) in Mayur Vihar’s water is  about 1,200. The figure rises the closer you get to the Delhi border with Uttar Pradesh. It is 2,200 in Vasundhara Enclave and increases to 3,000 to 3,500 on crossing the border.”

The reason, he explains, is rampant exploitation of groundwater. “When people are not paying for groundwater, they use as much as they can extract,” he says. The culprits are mostly recently regularised colonies, residential apartment blocks and illegal industrial factories and workshops.

As groundwater levels decline people get desperate and dig deeper. But levels of TDS, which comprises particulate matter and contaminants like heavy metals, increase the deeper a bore well goes, since fresh water is usually found at the top and saline water at the bottom.

The DJB is keen to decentralise sewage treatment and raise groundwater levels. Its first successful attempt at Rajokri on the Delhi-Gurugram border, cleaned up a sewage-laden pond by constructing a wetland and used minimal technology.

The Akshardham project, on the other hand, is technologically driven. Alcantarilla Limpiar Equipo, the startup partnering DJB, was founded in 2017 by three cousins, Sidhant Gupta, Sidham Gupta and Bhaskar Mahajan. 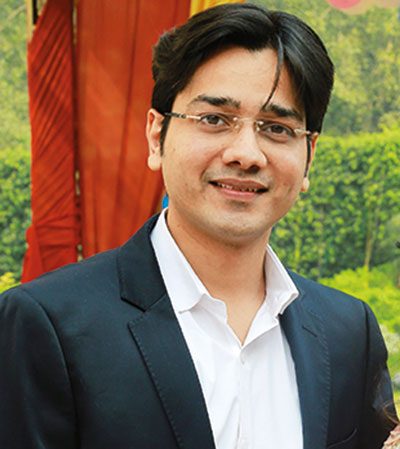 “We have been noting the quality of water degrading over the years and realised this would be a constant issue going forward,” says Sidhant.

The startup aims to clean up drains, rivers and lakes. It took them two years to develop the machine that they are operating at the DJB facility at Akshardham. They are doing the pilot free of cost.

The pilot is being done at one of DJB’s Ranney wells in Akshardham. Contaminated effluents are being drawn from the Shahdara Link Drain, cleaned and currently used only for horticulture.

When the pilot stage is successfully completed, the cleansed effluents will be put into the Ranney well which is 60 feet deep and has radial pipelines to draw groundwater.

Without treatment, the drain's toxic effluents are contaminating groundwater on which east Delhi housing societies depend and the Ranney well draws for supplying water to south Delhi.

The Ranney well currently pumps 4.5 million litres a day (MLD) to the Okhla sewage treatment plant (STP) from where water gets supplied to south Delhi.

The DJB’s idea is to instal multiple treatment plants close to Ranney wells and then use the water according to the needs of the area. “We could either augment the water supply or recharge groundwater tables,” explains Srivastava. There are 14 Ranney wells, some of them built 40-45 years ago, located 1.5 km from
each other.

The pilot project can clean 10,000 litres of water per day. Currently, the Biological Oxygen Demand (BOD) of the water in the Shahdara Link Drain is 150. It falls to less than 10 after treatment. BOD is a measure of contamination in the water.

Interestingly, it takes the machine only 15 to 30 minutes to clean up the water to this level. Current technology being used in India requires two to three days of retention time before further treatment and filtration. 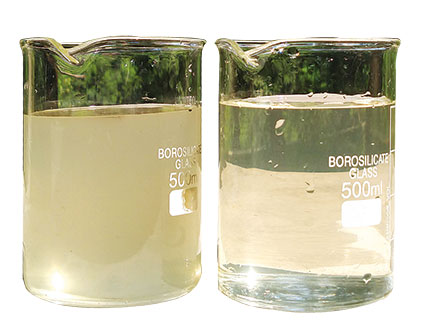 Water before (left) and after treatment

Water is pumped from the drain into the key component of the system — the electrocoagulation unit. It is here that 80 to 90 percent of chemicals and pollutants are filtered out. The machine uses iron plates through which electricity is passed.

The water flows through the iron plates and through a chemical reaction clumps of pollutants form a foam-like substance.

The water is then mixed with polymer coagulants and undergoes a process called flocculation which causes the remaining fine pollutants to clump together thereby making them heavier. The remaining pollutants settle in the next chamber where the water is slowly drained for further treatment.

In the final part of the process the water passes through two filters, a multi-grade filter which cleans up any remaining particulate matter and an activated carbon filter. “The filters can be changed or more can be added and modified to get the water level to an even lower BOD,” says Sidhant.

The plan is to lower the BOD from 10 to just two. “Essentially, we are aiming for drinking water quality,” says Sidhant.

The machine occupies just nine square metres of space. But the best part is its low-cost. The investment in technology to clean 10 kilolitres per day (KLD) is just `15 to 20 lakh depending on the filters installed. “Barring its operational and maintenance costs, of course,” says Sidhant, laughing. 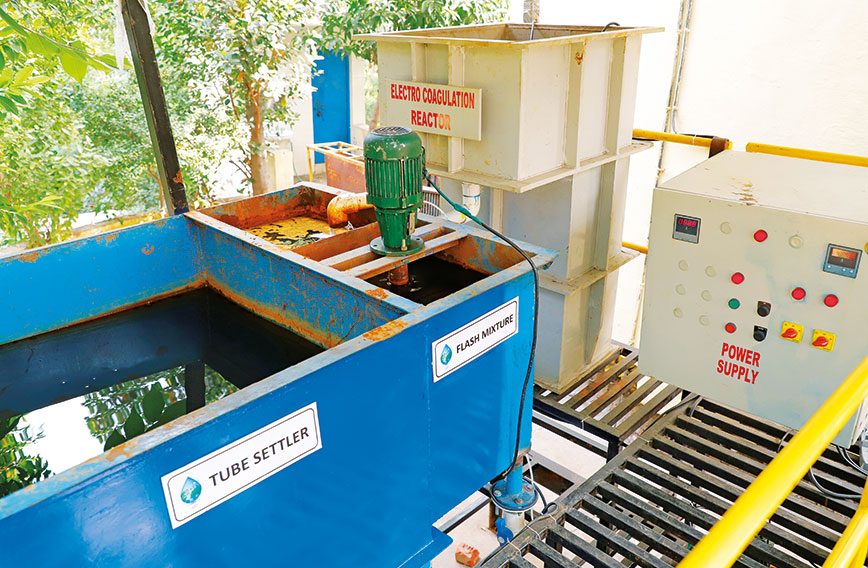 A close-up of the machine

Why did the DJB switch from constructing wetlands to a tech solution? Srivastava explains that one solution doesn’t work for all water bodies. Rajokri’s topography is different and the area is rural. The place requires the people to participate in maintenance.

“Rural set-ups generally need to be low-maintenance and have a robust system. They don’t need skilled manpower,” says Srivastava. “In contrast, the Akshardham pilot is an emergency solution to a critical water issue.”

“The idea is to have wastewater recycling systems, which use the recycled water, replace the demand for potable water and, wherever possible, augment the water supply,” says Srivastava. “Setting up decentralised water treatment systems at source is key.”

The DJB is also considering sucking out all the water from the Shahdara drain, treating it and then releasing it back into the drain further downstream, allowing it to percolate and disgorge into the Yamuna.

The outcomes of the pilot will be positive. “It will reduce the flow of sewage going into this drain which, in turn, will ensure less pollutants in the Yamuna. It will also severely reduce the pollutants going into groundwater tables,”
says Srivastava.