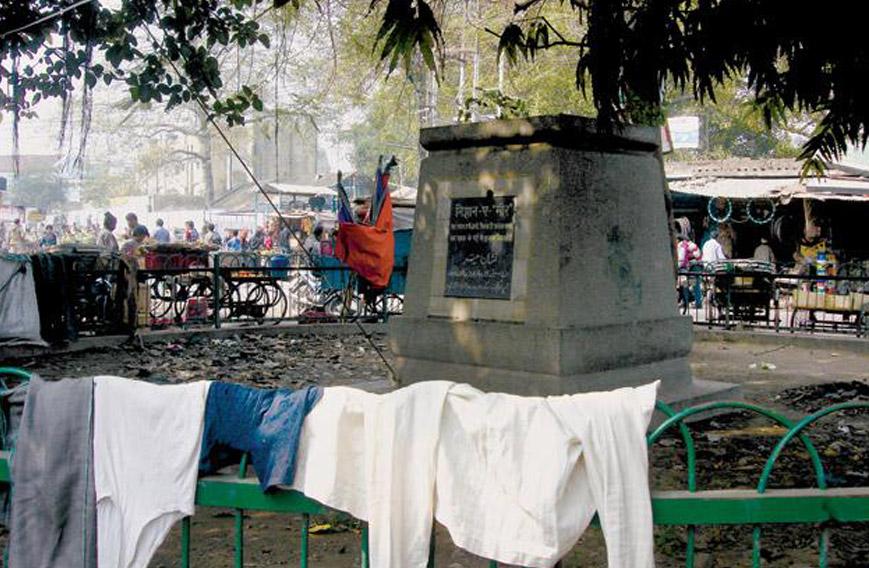 A day with dead poets

There are three must-do things for a visitor to Lucknow, said the cab driver: ‘Tunday kabab khaen, Imambara dekhen aur chikan khareeden.’ (Eat tunday kabab, visit the Imambara and buy chikan.)  Not heeding his sound advice, a group of four writers at the Lucknow litfest decided to spend a day with Lucknow’s dead poets.

I was in Lucknow to attend the literary festival. Apparently I was. The not-so-apparent purpose of my visit unveiled later. I had emailed the organisers asking about Mir Taqi Mir’s mazar.  The search for Mir Taqi Mir’s grave, perhaps the greatest Urdu poet of 18th century Mughal India, manifested only at the very end of my visit. The day after the litfest ended, Atif Hanif, the marketing

director of the lit fest, took us out on a heritage walk.  An expert who knows his city like the back of his hand, Atif guided us through the morass of traffic-choked lanes of old Lucknow. A quest for mysticism in Urdu poetry and mystical love that makes no distinction between love of God and love of humanity had led me to explore Mir Taqi Mir’s poetry last summer.

And here I was, searching for signs of Mir in the city where he breathed his last. However, we were told that Mir’s grave no longer exists. He was buried 200 years ago near Lucknow’s railway station, in a locality called Bhim ka Akhara. But his grave has been built over because land-grabbers acquired the cemetery some decades back. A mosque, flats, a railway platform, who knows where lies Mir beneath these? Who dare demolish a masjid or mandir? The poet Bulleh Shah  wrote that if forced to choose between places of worship and the human heart, it was preferable to destroy places of worship, but never the heart.  God, in Bulleh’s opinion, lives in the heart, making the heart the ultimate site of worship. The loss of a grave is not such a loss because Mir continues to live in the ghazal-lovers hearts. Mir’s legacy is infinitely larger than his grave.  Many have well-marked graves, but how many leave behind six diwans filled with 13,000 couplets?

We walked around Bhim ka Akhara. The peanut sellers in the market

eyed us with bemused curiosity. A man leaned out over his balcony in the waning winter morning to look us over as we photographed the street named after Mir. We  searched for signs of Mir like pilgrims excavating a  vanished kaa’ba. My heart filled with a sense of gloom, grief, disappointment and something bordering on fear.  What becomes of a people who don’t revere their poets?

Close to Mir Taqi Mir Marg is a plaque in honour of Mir. It’s the Nishan-e-Mir. On its railings the locals had hung their washing to dry. On the marble plaque, in elegant, elegiac verse are inscribed Mir’s words, a poet’s prescient epitaph about uncaring, irreverent future generations:

Do you think it effortless, the fashioning of humanity from clods of clay?

The cosmos wanders restlessly for eons before poets/humans are born.

Mir’s heart-weariness as a luckless poet is poignant.  In his last days he lost favour with the  Nawab and also the elite of Lucknow.  He was too gifted, too dignified, and somewhat temperamental, unable to bow to more pedestrian tastes.   Had he been more of a people-pleaser, he would’ve won himself royal patronage and an impressive tomb.  Even though he spent three decades in Lucknow until his death in 1810, he remained an unsettled immigrant in the state of Awadh. He moved there in 1782 from invasion-ravaged Delhi on the invitation of Nawab Asif-ud-Daula, but he never stopped yearning for his beloved Delhi:

Dilli the best city in the universe

Where once dwelt the most distinguished

I  am a denizen of that ravaged realm

Across the street from Nishan-e-Mir is the rundown edifice of the Rafa-e-aam Club, the aam aadmi’s club – the Hindustani rebuttal to the exclusive, No-Indians-Permitted clubs of the angrez. Yet another reminder of the ravages of time and neglect.  In this ramshackle building’s spacious grounds now thrive despondency, stray goats and a second-hand doors business. The first session of the Progressive Writer’s Association was held here in 1936. What’s undeniably progressive about it is its seemingly unstoppable dilapidation. We clicked pictures, mouthed a few platitudes about blithe disregard for priceless cultural heritage, and moved on to Majaz, the next dead poet on the day’s agenda. We were unwilling to linger too long at any one place lest some inconsolable sadness pervaded the heart.

The rest of the day was spent in visiting Majaz, Mir Anees, Sauda, Yagana and Hasrat Mohani.  Some have well-preserved graves in comparison to Mir’s but nowhere is neglect absent. As if to recover from an unnamable grief, I sat and stared at passersby when others went in to visit Yagana. A group of aimless young men loitered near a street vendor.  They stared at three burqa-clad women as they alighted from a crowded tempo, holding fast a child’s hand.  A woman in a headscarf was trying out trinkets from a cart full of glittering stuff. Which of them grieved for Mir? The sky was clear. The late afternoon sun was beaming down benevolently. Winter seemed almost over. Life in Lucknow, as elsewhere on the planet, was doing what life does: hurtling on.

Dusk was falling as we approached our last stop. Along the labyrinthine narrow galis off Hardoi Road, we had to ask several shopkeepers the way to Begum Akhtar’s mazar.  A shy  moon was now peeping out from above the brown, winter-stiff foliage of  trees stuck between narrow houses. Traffic and rain-filled puddles slowed us down. We skirted past them. Finally one man gave us precise directions: when you reach the big transformer at the fork in the road, take the left fork, and follow it to the mazar.

At Begum Akhtar’s mazar, Suraya Bano and Chanda greet us cheerfully. They are the caretakers and keep the place clean and cared for. Understated elegance in marble inlay work adorns the graves of Begum Akhtar and Mushtari Sahiba, mother and daughter, lying side by side. The lighting is subdued, the surroundings clean, and the ethos undeniably reassuring, thanks to the devoted efforts of the Sadbhavana Trust and Sanatkada. So grateful am I that I ask for the visitor’s book to record my gratitude.

The day spent with dead poets ends on an unanticipated, positive note.  It started with misgivings for the missing grave of an 18th century poet, but ends at a well-tended, legendary ghazal singer’s resting place. I muse over my mental notes and the possibility of Mir’s remains under a mosque seems ludicrous – Mir who mocked ritualistic religion and the literal-minded ulema in his sardonic, yet delicate couplets.  The heart feels uplifted. I’ve been saved by a song. I hum Begum Akhtar’s rendition of this well-loved Mir ghazal under my breath:

All remedies failed, none succeeded

Why speak of Mir’s creed?

He abandoned Islam long ago,

Resides in a temple, a tilak on his forehead.

May Mir forgive me for trying to translate his exquisitely crafted couplets.