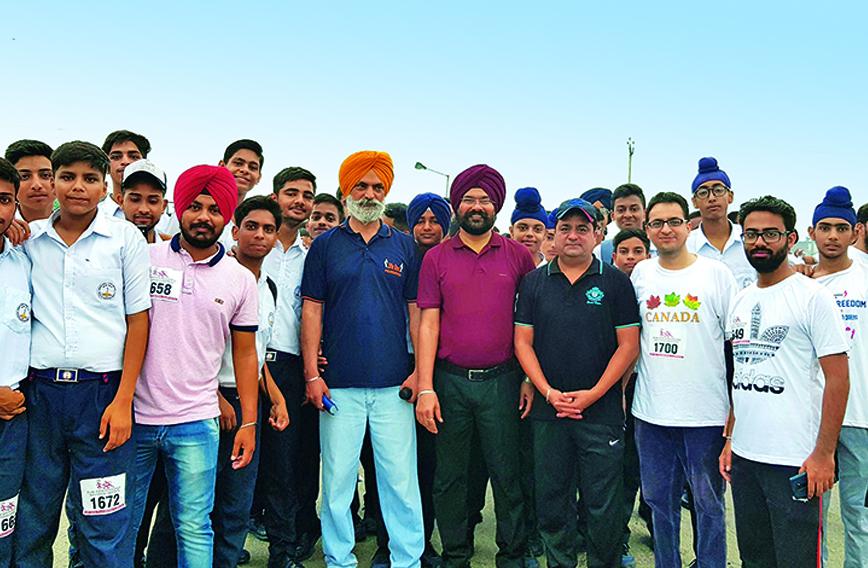 In Ludhiana, clean-up with scrutiny by residents

After getting the Punjab government to allocate funds for the cleaning up of the Buddha Nullah, residents of  Ludhiana, supported by activists, have insisted on and got close public scrutiny of the project.

The Buddha Nullah has been an embarrassment for prosperous Ludhiana. It carries sewage and industrial effluents. It endangers the health of the residents in the city and pollutes the Sutlej lower down.

Efforts to have it cleaned came to naught till recently when finally Rs 650 crore was allotted for its rejuvenation.

But lack of transparency in the implementation of the contract and absence of community and professional oversight in its execution prompted citizens groups to object.

Citizens asked for the involvement of environmental scientists and other specialists while framing the detailed project report, which has now been agreed to, instead of the contractor having a free reign.

“Without scrutiny, the contractor will act in his own interest and try and maximize his profits instead of taking an approach that provides a comprehensive solution,” says Jaskirat Singh, an entrepreneur with a keen interest in urban management and transparency in government.

Voluntary organizations have also demanded that the government make efforts to sensitize and educate citizens about the need to ensure the cleanliness of the Buddha Nullah. The nullah covers a distance of 14 km across Ludhiana city. “It has been a source of misery and death not only to the city’s residents, but also to over 10 million people, who live in areas along the Sutlej and utilize its water for drinking and irrigation in the states of Punjab and Rajasthan,” says Jaskirat Singh.

Investments have been made in improving the Buddha Nullah in the past, but in the absence of the money being spent without oversight, there have been no improvements. Residents don't want the present contract to go the same way.

It was thanks to voluntary groups in Ludhiana that Rs 650 crore finally came to be allotted for cleaning the nullah.

Punjab Finance Minister Manpreet Badal announced the allocation of funds in the state budget for 2020–21.

Pollution caused by the Buddha Nullah has resulted in unusually high number of cancer cases and other diseases, apart from crop loss, along the course of the Sutlej. This impact is most pronounced in south-west Punjab, particularly in the Malwa district, and districts of Rajasthan bordering Punjab. Of the total amount, Rs 208 crore will be sourced from the Central Government’s Atal Mission for Rejuvenation and Urban Transformation (AMRUT) scheme. The state government will be providing Rs 342 crore through the Punjab Infrastructure Development Board (PIDB).

The Rs 650 crores allocated for the project will be utilized for completing the first phase.

The project envisages setting up of a Sewage Treatment Plant (STP) with a capacity of 250 million litres a day, improving existing STPs, a dairy effluent treatment plant and setting up of a system for taking effluents from industrial units to a common treatment plant. The project also provides for beautification and landscaping of the banks of the Buddha Nullah. Says Naroa Punjab Manch convener Gurpreet Singh Chandbaha, "It is a welcome step from the government. Cleaning up the nullah was our main demand. We made numerous representations, organized protest marches, but no action was taken. Now, at least, the government has begun doing something that benefits us all."

Buddha Nullah, known as Buddha Dariya in the past, was a clean stream at the heart of social life in Ludhiana. But with increasing industrialization and population growth, pollution levels rose manifold resulting in the highly toxic water body of today.

Says Dr Ashwani Kumar, “Nothing much had been happening since the last 40 years, though the authorities have been spending regularly to clean up the nullah. The success of the government’s present endeavor will depend a great deal on the managerial leadership that is provided to the project.”

The project is being implemented by the Punjab State Water Supply and Sewerage Board (PSWSSB). Activists noticed a high level of secrecy in the entire exercise and decided to demand greater scrutiny.

“The detailed project report proposes to mix 20 per cent of effluents from industries with sewage for treatment in the STP. This defeats the very objective of the entire exercise as it gives room to industries to mix up their effluents with the sewerage as is happening currently. Moreover, the STPs are generally not equipped to handle industrial effluents and will be rendered ineffective,” said Jaswant Zafar, an activist who has been at the forefront of the local movement.

Ludhiana has over 300 dyeing and electroplating units. These are responsible for the highly carcinogenic effluents discharged into the city’s sewerage system which ultimately end up in the nullah. It is mandatory for such units to set up effluent treatment lants, but most of them lie idle.

Subsequent to concerns raised by volunary groups, the state government held a meeting on March 17 of the Special Task Force (STF) it had constituted for cleaning up the Buddha Nullah.

The STF, headed by Namdhari sect chief Satguru Uday Singh, raised strong objections over keeping civil society groups at bay. Even the Mayor of Ludhiana and elected representatives from the city had not been involved.

At the meeting, Ludhiana Mayor Balkar Singh Sandhu rued the fact that elected representatives weren’t aware of the details of the project.

Interestingly, Kahan Singh Pannu, who is Secretary, Agriculture, and also heads the Punjab government’s Mission Tandrust Punjab expressed surprise at the meeting over the fact that nothing was being done to shift the dairies, which discharge effluents into the Buddha Nullah resulting in much of the pollution.

“The dairies must be shifted as per orders passed by the Chief Minister before we go ahead with the project. This will lower the cost of the project by at least `100 crores,” he said.

The shifting of dairies outside city limits has been a contentious issue given that a number of senior politicians, including a cabinet minister in the Punjab government, own some of the larger units. Despite efforts made by the Municipal Corporation's Commissioner Kanwalpreet Brar over the past year the owners have refused to budge on one pretext or the other.