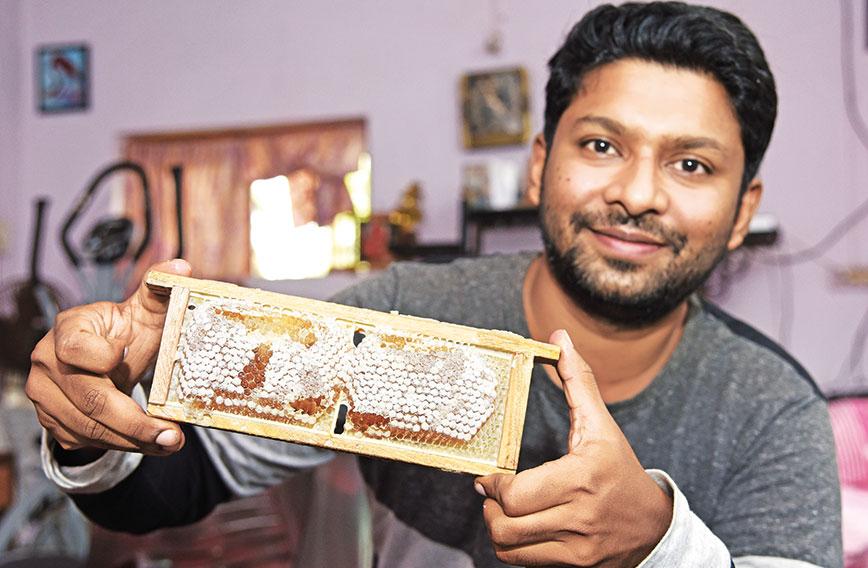 There is money in honey! Ask Raikar & Co.

When Suprajit Raikar started biking into Goa’s countryside with his friends, he was struck by the hardships unemployed youth deep in the interiors faced. He started Desi Motorcycle Diaries, a club of two-wheeler travellers, who biked into villages to extend a helping hand.

Raikar, whose initial ambition was to join the Indian Army, has a Masters of  Computer Application (MCA) degree. But he turned his back on a comfortable job in the IT sector and instead made the welfare of farmers his core mission.

He now runs Raika & Co which sells raw and processed honey through Amazon.com.

This year Raikar was bestowed the Rural Entrepreneur Award 2018 by the Goa Entrepreneurs Mentoring Service and Business Network International.

“I started my company in September 2016, at my residence in Benaulim which is a few km from Margao, to market and sell honey produced in bee-boxes by farmers in the interior talukas,” says Raikar, sitting among boxes of packaged products waiting to be picked up by Amazon for delivery to other parts of the country.

In the past two years or so, he has created a network of over 100 farmers who keep bee-boxes as an alternateive source of income.

It did not all start with honey. After completing his MCA, Raikar went to Bengaluru, the IT capital of the country, but returned for reasons that only a Goan might understand. “I just missed my fish-curry rice,” he says with an embarrassed giggle. He worked at N.E. Technologies in Verna, but his soul was restless.

It was at this time that he started visiting interior areas with members of his motorcycle club. “When we went to these places we got to know their problems and electricity was one of them,” he says.

The club used a blog and through crowd-funding gathered money to buy solar lamps and distribute them to students in areas where electricity supply was either erratic or had not reached.

Around this time, Raikar started padekar.com, a website to link coconut pluckers (padekar in Konkani) and plantation owners. “It was a huge challenge and I brought them on board by promising accident insurance and prompt online payments,” says Raikar. In a short while, he and the club succeeded in creating a network of 25 coconut pluckers and started getting orders from large plantation owners.

But finances eventually dried up and in 2016 Raikar went back to the IT sector. But his heart was not in it. This restlessness eventually led him to set up Raika & Co.

“In 2012 the state government introduced a bee species known as apis mellifera, which could produce 24 kg of honey a year. However, the experiment failed because the species was native to the cooler climates of Europe and North India,” says Raikar.

He went to the Central Bee Research Institute in Pune to ascertain which bees were native to Goa. Raikar discovered that apis cerana indica was more suited to the state, but that this species produced only six or seven kg of honey in a year. Together with the Krishi Vigyan Kendra, Raikar started training sessions for farmers and students. Raika & Co supplied the bee-boxes and the farmers sold raw honey to the company even though they were free to sell to a buyer of their choice.

As we talked Raikar bolted to his refrigerator and returned with a frozen comb laden with honey. “Take a piece and chew on it. Suck the honey and spit out the wax,” he urged. The raw honey was delicious and tangy. Raikar explained that the presence of raw pollen determined the taste of the honey.

Apart from marketing and sales, his effort is directed at creating sustainable income for tribals located in the interiors. “These tribals migrate to the coast in search of jobs and my aim is to create a sustainable economic model which works for them,” he says.

The company packages raw and filtered honey and sells them under the brand name of Sahayadri. In the old days tribals used to source honey from the wild and extract it by driving away the bees with fire. This usually destroyed the honeycomb.

Bee-boxes do the same job scientifically. “The queen bee still has to be sourced from the wild,” says Raikar. The honeycombs are taken out periodically and placed in a centrifuge to extract the honey. Once the honeycomb gets too old it is melted down to make beeswax candles. Each honeycomb has around 3,000 hexagonal cells.

Each box produces six to seven kg of honey per year, but this could go up to 18-20 kg in the interiors where more flowers are available.

“Honey production is dependent on flower production. In the Western Ghats this process starts in February and ends in June when the monsoons start,” Raikar explains. Bee-boxes are moved to coastal areas when flowering in mangroves takes place between June and August. “I use a network of friends and acquaintances to help farmers relocate boxes whenever possible.”

Since bees consume honey, about 25 percent has to be left in the honeycomb to help them survive the monsoon months and, at times, sugar syrup is fed during this period.

“It takes around 10 million flowers to produce 100 gm of honey,” says Raikar, explaining how flowering is important to the process and the flavour of the honey. “Honey produced in Benaulim, which is populated by coconut trees, will naturally have a coconut flavour, while the jambul tinge is prevalent in honey produced in the interiors. Honey that is sourced from Karnataka could have a sunflower edge to it.”

Flavour plays an important role in pricing as well. Batches of honey are sent to a Pune laboratory to determine the flavour. Soapnut flavour is the costliest and could sell for up to Rs 4,000 a kg whereas multiflora honey could sell for Rs 900.

As we chatted about the business at his residence in Benaulim, an Amazon team arrived to collect the packaged boxes. He showed us a bee-box which was empty, thanks to panchayat workers who had fogged the place to kill mosquitoes and ended up driving away all the bees.

Despite the pressures of running a business, Raikar has not forgotten his social commitments. “Ten percent of profits are diverted towards procuring solar lanterns which are distributed to students in the interiors,” he says.