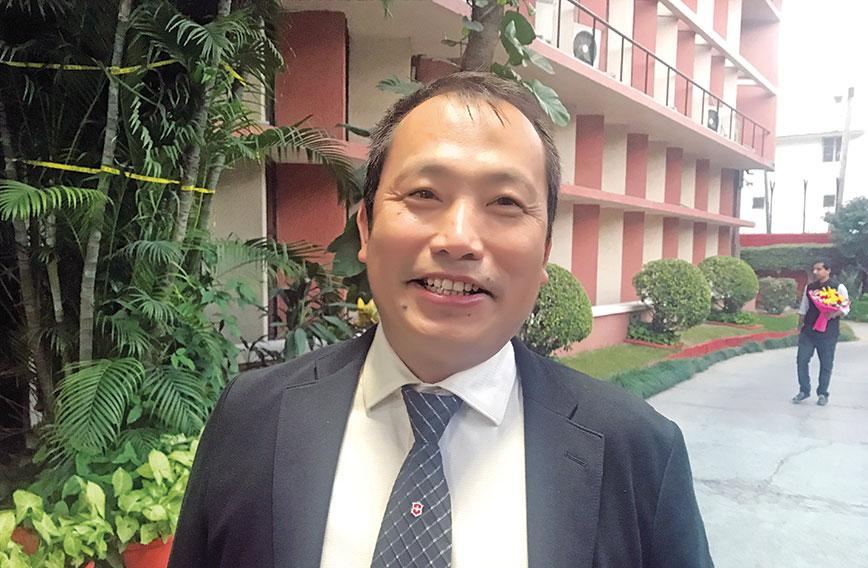 Neichute Doulo: ‘Our young people must not just see themselves working in hotels and malls’

‘Northeast is full of opportunities’

For decades, the Northeastern states have been showered with government funds to promote development. One of the consequences of this largesse has been widespread corruption with the money getting siphoned off from projects. A less understood but equally debilitating consequence has been the mindset to depend on the government for jobs.

With the government’s capacity to recruit being limited, and the Indian economy opening up, over time young people from the Northeast with a basic education have left their home states to seek livelihoods elsewhere in the country. Look around in any major city and it seems that an exodus is on.

For the Northeast, this is a big blow because its best and most productive people are leaving. If it could attract investment, perhaps they would stay. Better still, if an entrepreneurial mindset could be encouraged young people could build businesses and create wealth.

Neichute Doulo, 49, gave up teaching economics in a college in Shillong, to promote the spirit of entrepreneurship in Nagaland. He set up Entrepreneurs Associates with friends 17 years ago to help young people with training and seed capital. Thanks to his efforts, thousands of young people in Nagaland and Manipur have become entrepreneurs.

Doulo himself comes from a village on the border with Myanmar. He worked his way through multiple jobs and successfully acquired a master’s degree in economics from the Northeastern Hill University before taking up teaching for two years.

It is his mission to take up self-employment or jobs in the private sector and stop looking to the government. “I am just a village boy really,” he says. “If I can do it anyone can. People have to realise that the opportunities are in their backyard and not behind a sales counter in Mumbai or Bengaluru.”

Here are excerpts from a conversation Civil Society had with Doulo in Delhi recently:

You have been promoting entrepreneurship in Nagaland for 17 years. What is the impact you have had?

The most important impact we have had is in the shift in mindset among people. They are more willing today to create enterprises and look for jobs in the private sector. Earlier, no one would think beyond a government job.

How do you measure this?

I can give you the example of a small town in Nagaland called Mokokchung. In 2003, most of the trade and commerce activities in this town were controlled by people from mainland India and people from Bangladesh, who you could say were illegal immigrants. But it is 10 years since we began working in Mokokchung and now 70 percent of the businesses are run by local young people. You could say it was 30 percent earlier and now it is 70 percent. That is the transformation that has happened.

If you see Kohima, the capital of Nagaland, in 2003, local participation in local trade and commerce was just about 10 percent and today it is about 40 percent. In Kohima district, which is the hub of commercial activity in Nagaland, local young people were involved in just about five percent of the commercial activity and today it is about 20 percent. So, there has been a huge change in the level of involvement of local young people in creating small enterprises and earning through them.

What are the kinds of businesses that people take up?

It is very varied. It may sound strange, but there are people selling frogs — not a business common elsewhere in the country but certainly an opportunity in Nagaland. You also have people opening hotels, restaurants, printing presses, grocery stores, motor garages. There are others who take up carpentry, truck-driving and taxi-driving.  Just about any kind of economic activity.

When you say taxi-driving, do you mean owning taxis?

The first example you gave was of frogs?

There are a lot of frogs in rivers and ponds and frogs are regarded as a delicacy in Nagaland. But it wasn’t seen as a business and there was no local entrepreneur who had a hang of this market. People who trained with us to be small entrepreneurs, however, saw the opportunity in catching frogs and selling them. We never saw frogs and snails as an economic activity. But now there are hundreds of women who collect and sell them.

Are the frogs and snails only sold in Nagaland?

In Nagaland and they are also exported to Manipur and Arunachal where they are popular and considered to have health benefits.

Is there collection only from the wild or are people farming frogs as well?

Some people have begun farming frogs in a small way here. I won’t be surprised if in the coming years some big entrepreneur will develop frog farms in the region. There is a big demand for frogs.

How have incomes changed? What is the average size of the businesses that get set up?

I can give the example of a person who came to us in 2005 with very little education and dispirited. We trained him to be an entrepreneur and today he employs 15 people. He has two big trucks, two smaller commercial vehicles and a small car of his own. He has bought land in Dimapur and Kohima. This is the kind of impact that can be had — people who at one time had nothing but have succeeded through entrepreneurship.

Do you find failure is something that you need to deal with?

Yes, I encourage people to fail. If you haven’t failed you haven’t experienced business. We have financed 8,000 young people. Of them about 3,000 are successfully in the market and therefore there has been a lot of failure and frustration as well. It is part of the game. In the world of entrepreneurship if someone has not seen failure they are not fully mature.

What is the nature of the finance you provide?

If an unemployed youth were to come to our office and for 45 days go through what we call our BEST programme — Basic, Entrepreneurial, Skill, Training — he could be eligible for a BEST Award of Rs 1 lakh as interest-free loan. In every batch, we give the BEST Award to three people. But everyone trained by us can get a loan at the normal rate of interest. Some who are lucky can get loans at six percent, but that is not available for everyone. The rest would be eligible for loans at 16 percent interest.

Where do the funds come from?

What would be the size of your loan book?

It is very small. We work in both Nagaland and Manipur and if you were to include all our lending activities it would be about Rs 30 crore. It is very small but very meaningful to those young people who have absolutely no access to bank finance.

And where do you get your funding from?

Our members who are already successful have put in equity by buying our preferential shares. We also have members who buy small shares for one or two years. We have about 3,500 shareholders now.

And you also take funds from the banks?

Yes, because these are all unemployed young people who have no access to bank finance. Now that the government is pushing Mudra loans, some of the banks have begun to give loans to our entrepreneurs. But it is still not sufficient.

You borrow from the banks at 12 percent?

Some banks we borrow from at 10 percent. A lot of the time we borrow at 12.5 percent.

And you lend at?

Our maximum rate of interest is 16 percent. The spread is very low and that is why we keep our team very small.

What do you spend on your operations? What kind of administrative budget do you work with?

We have some projects supported by the Tata trusts. The Government of India has also supported us as a part of its promotion of entrepreneurship. All put together, we work with a very small budget of about Rs 3 crore. There is no wastage.

How much is gender an issue?

Across India there are people from the Northeast doing jobs — almost as though they have run away from the region. What do you think can be done to keep them back? Should they be held back at all?

While it is good for our young people to go out of the Northeast and come back with experience, it is very important for them to realise that opportunities exist in our backyard.

The Northeast is full of opportunities.

Our young must not just see themselves working at front desks in hotels or as sales people in shopping malls. The opportunities exist right here.