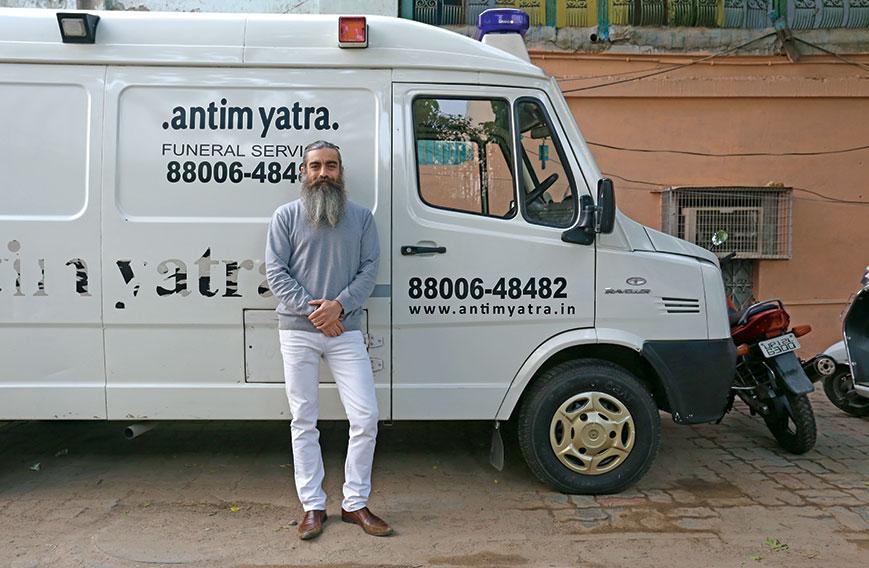 In 2003 Daljit Sean Singh had a near death experience in America. Lying half-conscious on the road, he fervently hoped his body and soul would find their way home. He didn’t want to die in an alien land. “I thought of Gangajal. I thought, Why can’t I return to the place of my choice,” he recalls.

The idea of starting a service that would help people undertake their last journey just the way they might have wanted to, with dignity, struck Daljit once he was back on his feet.

India suffers from a paucity of funeral services. When a person passes away it is left to grief-stricken relatives to somehow organise the cremation, last rites and ceremonies like the chautha and terahvi.  Support services are mostly sloppy, ham-handed and insensitive, though the funeral industry is probably worth hundreds of crores of rupees.

Hearse vans are generally ramshackle and cremation grounds — owned by the state government — are dirty and unkempt. Priests tend to haggle. The paper work for recording the death and getting the death certificate is organised but help is needed to fill forms correctly. The entire experience can be distressful and challenging for an already traumatised family.

Daljit saw the need for such a service and yet hesitated to start one when he returned to Delhi. Instead he began Event Décor, an event management company, and discussed his plan with friends.

But the idea kept visiting him. He noticed how disarranged funeral arrangements were when a few members of his family passed away. Relatives were on the phone, trying to figure things out. “A hearse van arrived and broke down before the body was placed in it. The replacement van was ramshackle as well. The door wouldn’t close, family members couldn’t sit inside and it also reeked,” says Daljit. In this melancholic chaos there was no time to grieve.

Daljit wondered if trying to provide a humane funeral service would stigmatise him. Lean and athletic with a luxuriant beard, he works as a model and an actor in the Hindi film industry. He acted in Kill Dill and is now awaiting the release of his next, a Hansal Mehta film, Omerta, starring Rajkumar Rao. “I play a bad, bad, guy,” he says, his face crinkling into a smile.

In reality he is the good guy. Models are great at messaging, he says, and he would like to be a role model for society. He admires Richard Branson whose philosophy is that a business must benefit society. So in 2007 Daljit cautiously started antimyatra.in. “It took a lot of courage to actually begin services,” he says.

He finally took the plunge in 2014 and registered Antim Yatra as a company. “I wanted it to be a legit company following rules and regulations, honest and upfront. We have had our hurdles in putting it together. I didn’t want to advertise. First, we didn’t have money. Second, I always thought word of mouth is better. Let our work do the talking,” says Daljit.

Antim Yatra provides all funeral services under one roof. So you don’t have to deal with a whole lot of people. “Whenever a customer calls, we ask for their requirements, check for pundits, cremation grounds, provide the death certificate and if someone dies abroad we make arrangements to shift the body to their home.”

Three services are available: Shanthi, Shraddhanjali and Sahayatha. Shanthi takes care of cremation and last rites. Shraddhanjali consists of chautha and memorial services. Sahayatha helps the bereaved family with post-cremation rituals like immersion of the ashes in the Ganga or getting the death certificate.

“We have an ethos, a mindset. We look after everything so that the bereaved family can be together and grieve, recall and celebrate the life of their loved one,” says Daljit.

A new initiative that Antim Yatra is working on is tree memorials. Families or individuals can plant a tree in the name of the person who has passed away. And they will take care of your tree for you. Parks in Delhi and spaces in UP and Rajasthan have been identified.

Antim Yatra is being deeply appreciated. When an 80-year-old lady living on the eighth floor of a building passed away, her 60-year-old daughter didn’t know what to do. It was Antim Yatra’s six-member team who carried her mother’s body down gently and cremated her honourably. The daughter told Daljit that Antim Yatra had played the role of her own family. “We are like an invisible family. It is this appreciation that keeps us going,” says Daljit.

For a dignified last journey the larger ecosystem also needs to change. Delhi has just three electric crematoriums, out of which one is not working. According to statistics, 96,000 people die in Delhi every year. Daljit does a quick calculation. “So 263 cremations, using mainly wood, take place every day. Imagine the smoke that they emit in an already heavily polluted city.” The burgeoning city of Gurugram does not have a single electric crematorium.

Cremation grounds should be landscaped and spruced up with trees, benches and fountains. “I want to make places where your loved one leaves you less morbid. It can be done quickly. You should be able to go, meditate and feel connected there. Right now that’s not possible,” says Daljit.

Daljit has invested his own money in Antim Yatra but he hasn’t broken even as yet. Most of his clients are from the middle class. Services don’t cost very much and begin from Rs 21,000 upwards.

“I want to take a 500 million dollar industry from under the carpet and put it where it belongs. The way we do our last rites makes a difference to our culture, to the people we leave behind.”

Antim Yatra provides services in Delhi and NCR. Daljit does intend expanding. “I believe our dreams should be in tune with our bank balance. So once we are financially stable, we will start providing services in other cities as well,” says Daljit.