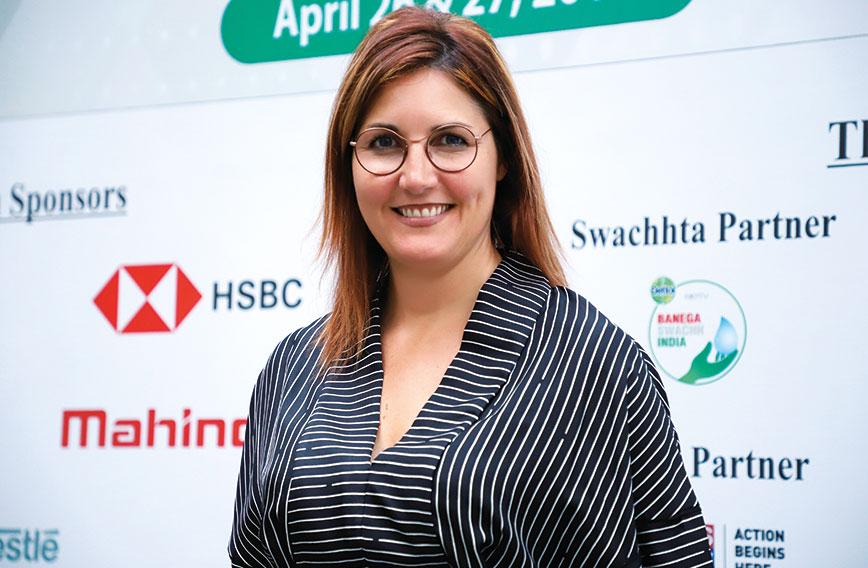 Cheryl Hicks: ‘Our role is to help a range of businesses invest in sanitation’

‘Sanitation is the fortune at the bottom of the toilet’

The Union government’s Swachh Bharat Abhiyan or Clean India Campaign has had several impacts. It has created awareness about hygiene and has led to more toilets being built than ever before across villages, towns and cities.

As the campaign has unfolded, a sanitation economy is taking shape. It is estimated to be worth tens of billions of dollars. Private investment is needed in sewage treatment technologies, user facilities at public toilets, fittings, water conservation, financing options and more.

The Swachh campaign apart, a policy on the management of sewage and faecal sludge provides the framework within which enterprises can engage with the national priority to speed up cleanliness.

To avail of the opportunity, global companies under the Toilet Board Coalition have begun reaching out to local bodies and state governments. The first formal collaboration is with the Pune Municipal Corporation (PMC) to develop Pune into a Smart Sanitation City.

Cheryl Hicks, executive director of the Toilet Board Coalition, was in New Delhi to attend the India Sanitation Conclave at FICCI. She spoke to Civil Society.

What is the Toilet Board Coalition?

We are a corporate-led coalition started because companies saw a business opportunity in sanitation. The 2.3 billion people without toilets are customers that they don’t have. So companies are very motivated to invest in universal access to sanitation. But businesses need a business case to keep investing. Our role in the Toilet Board Coalition is to reinforce that business case and help a range of businesses to invest in sanitation.

The toilets themselves are the first market for companies in the toilet business or in toilet products. But even more interesting and exciting is the demand for resources from toilets — the biological resources which are becoming scarce to many businesses. As their resources get more and more scarce they are looking to mine sewage.

The third area is smart sanitation — the digital economy. We are very interested in digital health, preventive health and the health information that comes out of this system. Until now we have not mined our toilets for information about our health. We go to the clinic or the hospital. The first thing they get us to do is to take samples. But if we can skip that step, we can save the economy money and have more direct access to health information.

So these are the areas we are looking at — areas where there is value in the system for businesses to invest and then create an investment case for universal access to sanitation. Sanitation has huge costs and that’s why we don’t have it for everyone.

Tell us about your collaboration with the PMC.

We had a very good relationship with Kunal Kumar (former commissioner of the Pune Municipal Corporation). He was launching the Smart City campaign and in a conversation he said he wanted Pune to be the first Smart Sanitation City. How can we do that, he asked us. We came back with a proposal that would engage the private sector — large businesses and entrepreneurs — in delivering smart sanitation.

We believe smart sanitation can give us data-driven decision-making. In sanitation a lot of those numbers we have are assumptions. They aren’t based on tracking actual usage through sensors. It is based on hearsay or rough estimates. But to make business decisions and truly understand costs and therefore revenues we need to understand what exactly is happening in the system in the city and in peri-urban areas.

So, Pune would be the first city to provide us a complete set of data on the sanitation system from toilet usage. This would include community and public toilets, waste management, the amount of resources going through that system, repair, maintenance and where the system is breaking down. In addition, health information and public health information need to be captured.

The project is about showing new models, including linkages to Smart City applications where we can get real-time data from the sanitation system. We can deploy new business models to scale up access, usage and behaviour change.

Are you empowering the PMC to do this? Is this a cut-and-paste model being offered by your consultants?

Not at all. This has never been done before and there are no consultants involved. These are businesses delivering services and innovating with the PMC.

But the PMC would be short of capabilities, of skills to handle this….

The outcome of this project is to create a smart sanitation roadmap for the city. We will run a series of pilots with businesses to show how it can be done, what kind of data can be captured, what kind of decision-making can drive this and what kind of private sector businesses we can engage because there is money to be made.

The PMC has to decide what is within their budget and what they want to take forward. The companies have to decide, based on those insights, what they want to invest in. No pre-decisions have been made here. This is about bringing the best technologies and combining initiatives to reinforce each other.

So when you are looking at companies making money, are you looking at capital investments?

No, they can be product models or service models or infrastructure models. Public and community toilets are already there. These are service models. Businesses can get people to use them, they can maintain them and create more community services around the toilets to make them a place where people want to go.

There is some infrastructure too in the case of waste management and some new waste-to-wealth models that will require capital investment, but first the city has to be willing to buy that because they already have a tender anyway to pilot these new projects. About 11 new STPs are being brought in.

Which private companies are keen to invest?

Some of our partners like Unilever, Kimberly Clark and Fermenich. They are working with public and community toilet service providers in Pune. With wi-fi enablement and with this new data opportunity they are looking at how we can drive behaviour change campaigns and test new concepts like a laundry facility. In Mumbai, Unilever is testing concepts like adding laundry facilities, hairdressers and other services. One of the public toilets for women has specific services for breastfeeding,  nappy changing and female hygiene.

Lixil has a low-cost toilet for rural areas. This is being deployed in peri-urban areas where there isn’t anything at the moment. They are working with one of our entrepreneurs who has a biodigester system that can be added on. So, decentralised models that don’t reach the sewage system are ready and available and are being deployed.

Would this also require an integrated sewage system? That doesn’t exist in most of our cities.

In fact, when we were looking at different cities we weren’t planning on the basis of sewage systems. We were more interested in decentralised solutions.

So the opportunities are in the distributed systems in small STPs linking, say, 50 houses and so on?

That is where the innovation is. But the Toilet Board Coalition’s model is to get the best of both worlds — link innovators on the ground serving small communities with those companies who know how to operate on a large scale.

What would this sanitation economy be worth?

Would this include the whole system — toilets, sewage, services?

Construction is obviously a huge opportunity right now because of the Swachh Bharat Mission. But after that there will be opportunities in ongoing maintenance and upgrade. We found 50 percent of those with a new toilet wanted to upgrade within six months.

The biological research is being led by private companies because they are facing the resource scarcity and have the money to spend. Data insights drive all of this and can be monetised. But, the value add in the years to come that would potentially change the way we look at the role of the toilet in society, is in digital health. We can get our heart information, our calories in real time. When you go to the toilet you can also understand your vitals, what nutrients you have or don’t have on a daily basis. This is an opportunity space.

Yes, we did this study in India first and it is the first of its kind to see the size of the opportunity here. India should be a proxy for other countries as well  as western markets.

We have a large number of poor people in slums. How does the Toilet Board Coalition see this?

That is why the companies formed the coalition, because the people without toilets, the poor, are customers they don’t have. India is developing and people will come out of poverty. The people
who don’t have toilets will benefit and companies will invest because they see value in the system. If we don’t see value then why invest? We need to reinforce these opportunities for businesses to invest.

You have been helping local entrepreneurs through your Accelerator Programme. What innovations have you been supporting? What are you giving priority to?

This is the third year of our programme. Our focus has been on India partly to feed the Pune project because we wanted innovators for it. One innovation is a toilet for women on a bus that has services around it. Biomass Controls is another one. It is a small-scale waste treatment mini-grid that can also upcycle toilet resources. There is the Blue Water company which set up a small STP in three months in Leh. Another innovation is Garv Toilet, a smart toilet that uses flush sensors that clean the toilet after use. Then there is Tiger Toilet. Their core technology is a low-cost digester linked to a mixer. They are looking for joint production opportunities which could then bring both of these to scale for the poor and be a waste management solution for rural areas.

What is the size of these enterprises?

They are small. We have intentionally looked at small because of innovation. But they do have sales so they are not at venture stage or in R&D stage. They are businesses that are now looking to scale up.

Where does investment come from?

It comes from a variety of sources, mostly donor-driven. Our mandate is to move them from donor-driven to commercial investment.

Sanitation isn’t a sector with much prestige in India. What will you do about that?

Well, that was partly the reason the Toilet Board Coalition was formed. We are showing that there is opportunity and money in this business. Sanitation is the fortune at the bottom of the toilet that nobody is looking at. We create support for young entrepreneurs, give them access to finance and expertise from multinationals so that they have incentives to get into the sanitation sector.

Do entrepreneurs in India face issues that you can’t deal with? In terms of policy and process?

There are a couple of things like standards. Many new technologies in sludge management do not have standards. New toilet designs don’t have standards. If a large company wants to buy fertiliser from faecal sludge there aren’t global standards for them to do that even if they see value in doing it. ISO and Indian national standards are working on some standards. We and the Gates Foundation are involved in that process to make sure it is business-friendly. The other is data. There hasn’t been reliable data so that’s another barrier everyone seems to face. Finally, trust that comes from overcoming those barriers of standards and data.