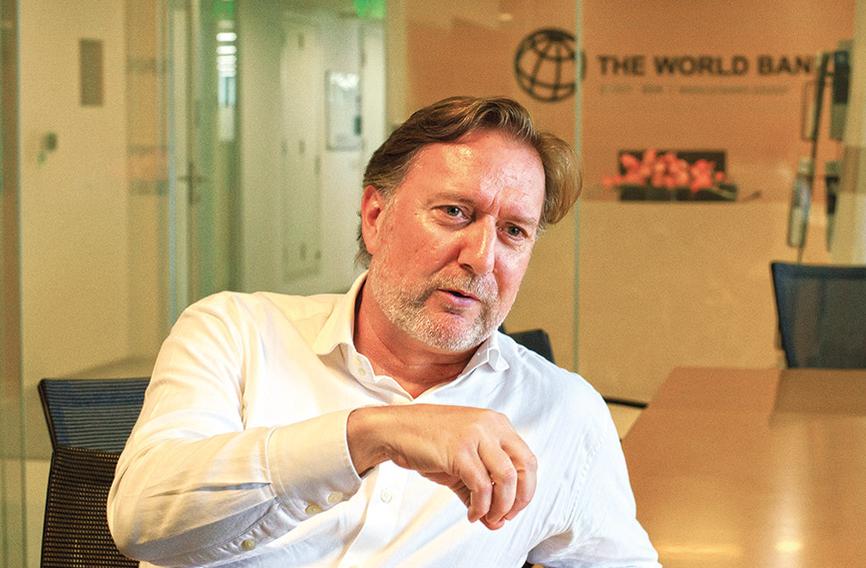 Simon Stolp: ‘The issue we are trying to address is the lack of affordable financing’

The Indian market in rooftop solar installations has been growing because of falling asset prices, beneficial changes in legislation, new financing arrangements and the zeal of entrepreneurs.

Photovoltaic panels are now visible atop a greater number of buildings than ever before. As word has spread, domestic and commercial consumers have begun to consider solar power as an alternative to conventional grid-supplied electricity.

But much remains to be done for the market to mature and rooftop solar power to become commercially sustainable.

Many more consumers need to be reached. Technology and services from solar companies should be made more widely available. Power distributors must feel enthusiastic about solar so that grid interconnectivity becomes smoother.

Banks have a crucial role to play in helping shape the market by lending to solar power developers and end-users and structuring loans on affordable terms.

It is with this in view that the World Bank has recently signed a $650 million agreement with the State Bank of India (SBI) to discount loans which   are expected to lead to the installation of more than 600 MW of rooftop solar power. The funds will be available at concessional rates of under nine percent.

The World Bank will essentially be pump priming the rooftop solar market to get it moving. It is hoped that disbursal of $650 million in loans by a big public sector lender like SBI will provide the momentum needed to achieve commercial viability.

Apart from solar developers, SBI will be encouraged to lend to end-users like small and medium enterprises, which it might not have looked at otherwise.

An important aspect of the agreement involves capacity building. While SBI is an experienced and sophisticated lender, it is new to the solar power market. The World Bank will be helping SBI orient itself to the needs of the market.

Civil Society spoke to Simon Stolp, the World Bank’s Lead Energy Specialist for South Asia, on the terms of the agreement and how it is different from  straight forward project finance.

How will the agreement with SBI impact the whole process of asset creation in rooftop solar power?

The issue that we are trying to address is the lack of financing or the lack of affordable financing. There is a lot of resistance from the current financial sector to enter this market at an affordable level of financing and at the volumes required. It is a new market which poses significant risks alongside a parallel market which already represents significant non-performing assets. There is a lot of trepidation about moving in from a financier’s perspective. So, we agreed with the government to try and get things moving within the market, try and establish some familiarity with the banking and non-banking finance institutions that will have to provide the finances so that they will be comfortable with increasing scale. Through this financing, we are trying to provide a cost incentive.

We have done that by accessing concessional finance and blending that with our finance to provide financing at a discounted rate.

So, it is a mix of many rates?

It is a mix of many rates and some of them highly concessional. What we have done is we have gone out on behalf of the Government of India, and accessed the Clean Technology Fund (CTF) which provides highly discounted financing to clean technology. We have blended that with our own resource and we have come up with a pot of money which is more substantial than the CTF.

What is the size of the fund?

What is your expectation of SBI? What do you expect it to lend at? This goes beyond a business arrangement. This is a social initiative.

Absolutely. Rates in the market change over time but they have generally ranged between 13 percent and 18 percent. We wanted to discount that. SBI came up with a rate, depending on creditworthiness, that sits between 8.3 and 8.9 percent. It is sub-nine percent. So, it is a very significant discount to what the market was and still is providing.

I think there is also the issue of availability and what we have done with this facility is to incentivise  SBI to lend to riskier parts of the market such as small and medium enterprises where the cost of financing is not so much the issue as the access
to financing.

By providing $650 million to SBI we are asking them to put aside $650 million of their own resources and dedicate that entirely to solar power at discounted rates to have the effect of moving the market. It is not just financing $650 million worth of assets but creating a context in which much more significant financial players can take part.

We are moving towards much more sophisticated ways of providing financing, going beyond just straight sovereign debt that provides you an asset. We are looking at ways in which we can leverage our financing to create much larger volumes of financial flows towards sectors that are important to India’s and the world’s development. You will see this in the World Bank across the board, but you will see this more and more in India in the coming years.

So, rather than finance $650 million worth of assets, somewhere in the vicinity of 600 MW to 800 MW in solar rooftops, we are trying to do it in ways that will also incentivise or provide comfort to the banking sector to go beyond that.

With SBI we are doing something different. We are saying the government has a solar rooftop programme. It wants SBI to provide finance in that programme. What we are going to do is to provide concessional finance to SBI, not for specific assets but to support that programme. So, we will disburse that money as SBI uses a similar quantum of money to finance solar rooftop installations. For every dollar, every megawatt it invests in we will provide this concessional financing to it. We have given SBI the capacity to lend at sub-nine percent.

Are you planning to work with other banks which might be more aggressive than SBI in reaching out to a new sector like solar?

I don’t think so. We see our role as being limited. We are not principal financiers to this sector. We wanted to help dislodge greater volumes of affordable financing and make that available to the sector. But we want the market to stand on its own feet. We want solar rooftop assets to be commercially viable and commercially financeable.

At the moment. Hopefully, by the time the $650 million has been disbursed you would have seen the business start to grow to the point where, particularly in the commercial and industrial sectors that we are targeting initially, there is a strong commercial case for solar.

Who will SBI be funding? Your press release talks of developers.

We are talking specifically of solar power developers. Whatever we finance will produce solar power.

So, you are looking at companies which can do solar rooftop projects and they should have certain credentials.

Yes. But we also want to reach out to the small and medium enterprises which will struggle to present their credentials.

We don’t want to exclude, for example, someone who has a small industrial facility that recognises that they have space on their warehouse roof where they can set up their own facility and own it and produce their own power and use it at a discount to what they can buy from someone else.

They can also access this financing alongside renewable energy services companies that will act as aggregators which will go out to warehouse owners, commercial and industrial establishments and say, look, you have a rooftop and I can provide you the installation and sell you the power at a discount to what you can purchase otherwise. So, we want to entertain all of these business models.

When we talk of a developer, it could also be a housing developer who recognises that the rooftop of the housing estate could be developed for solar power and that it can own that asset alongside the housing estate. Now, we are only going to finance the solar asset.

What you are essentially trying to do is join the dots. Basically, you will finance the companies that provide solar power services but you would also help the SMEs connect with them.

Or provide the finance directly to the SMEs if they want to own the asset themselves and have sufficient equity. They can go to SBI with the project proposal to finance their own facility.

What we have recognised is that there will be some small and medium enterprises that will struggle, given the size of their balance sheets, and present a credible risk to SBI. So, within the structure of their programme, we have also asked SBI to set up a small first-loss facility. We provide some risk coverage to incentivise SBI to go and work with much smaller companies.

So what you hope to do is to bring a lot more detailing to SBI’s lending in this sector.

Detailing, yes. SBI simply hasn’t dealt with this sector. SBI is a sophisticated institution and deals with sophisticated project financing across the board, but it hasn’t yet dealt with the small solar rooftop market. What we have done through this programme is to provide incentive to SBI to look at that business and structure its own internal processes and continue to improve them.

Does this mean working very closely with SBI?

There is a lot of homework to be done.

A part of the GEF grant will be used for capacity development, which will be aimed at SBI. We will be working alongside SBI to develop some of their processes to aid in their understanding of the rooftop market, and to help them see how this market has grown in places like California. We will also be helping developers understand how to tap into finance.

What about learning from successful Indian projects?

I agree there is a lot already happening out there.

A lot of that experience is also specific to the Indian situation and realities here. It may have more relevance than learning from California.