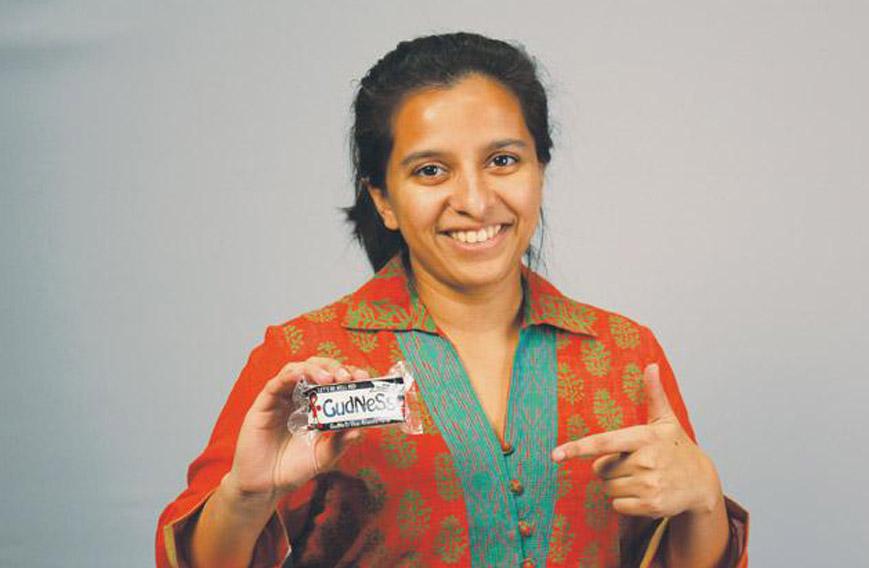 GudNeSs for Rs 10 with all the iron women need

A bar made from jaggery, nuts, seeds and multiple grains and available for just Rs 10 could be the low-cost solution to the problem of anaemia among Indian women.

Produced by Rajvi Mehta, 20, the bar is inspired by the chikki, a tasty and popular confectionery. Just five bars a week can provide anaemic women with all the iron they need in their diets.

In 2010, Mehta, a Mumbai girl studying biochemistry at Brown University in the United States, found that she couldn’t walk up a flight of stairs without feeling exhausted. She began to experience multiple episodes of fainting and chest pain. Back in India during her long winter vacation in December of that year, she discovered that she was suffering from Thalassemia Minor, a genetic disposition to anaemia.

“When I discussed my blood test results with physicians, I realised that I was one in over 900,000 million people in India who experience these consequences of anaemia on a daily basis and are unaware of their condition,” Mehta told Civil Society. That was when she decided to do something about it.

“I wanted to do something to help the situation and so I thought of Let’s Be Well Red (LBWR), initially as a project that filled gaps in previously failed government programmes. A market scan of government health programmes found that some had neglected nutrition completely in their treatment regime. Others distributed iron-fortified flour and rice, but these programmes were unsuccessful due to the lack of awareness about the optimal dosage needed to satisfy the daily iron requirements,” Mehta said.

In fact after spending thousands of crores of taxpayers’ money, the actual incidence of Indians suffering from the debilitating effects of anaemia has gone up. According to the National Family Health Survey-3 (NFHS-3), the percentage of children aged 6-35 months suffering from any degree of anaemia (low, moderate or severe) has gone up from 74.2 per cent recorded by NFHS-2 in 1998-99 to 79.2 per cent in 2005-06.

Among ever-married women in the age group of 15-49 years, the rise is from 51.8 per cent to 56.2 per cent in the same period. And in the case of pregnant women aged 15-49 years, it is from 49.7 per cent to a whopping 57.9 per cent. In absolute numbers, the number of anaemic Indians varies between 600 and 900 million, depending on how you define such people.

Back at Brown post vacation, Mehta launched LBWR. “LBWR is a non-profit social venture that aims to combat the widespread prevalence of iron deficiency anaemia in India through the manufacture of iron-rich nutritional bars. It’s a pun on the word well-read emphasising the role of creating awareness about anaemia, while the phrase “well red” focuses on the need to raise the red blood cell count,” Mehta explained.

She put up her project to the Swearer Centre at Brown University which supports promising student initiatives that aim to bring about social change. She received initial funding of $3,000.

Armed with her funding, Mehta was back to Mumbai in May 2011 during her summer vacation. “I designed and conducted anaemia testing and treating camps in the urban slums of Mumbai wherein I partnered with different NGOs (Family Planning Association of India, Kotak Mahindra and Nargis Dutt Charitable Trust) to spread awareness, conduct blood tests, explain patient reports and provide nutritional guidance. Through these camps we tested and treated over 5,000 anaemic women.

“During these interactions I found that while most women were enthusiastic about adding iron to their diet after understanding the consequences of anaemia, they were looking for a simple solution to their problem – they were looking for one iron-rich food supplement that contained the required daily dosage of iron. When I surveyed the Indian market, I found no such product,” Mehta said.

Now her focus shifted to creating this product. “From September, 2011, we began experimenting to develop a product that would not only be able to provide the daily dosage of iron and folic acid needed to counter anaemia but would also be tasty to ensure compliance,” Mehta said.

“I got the basic idea from chikkis – a confectionery made out of nuts and jaggery - and based on discussions with nutritionists at Brown University and Mumbai-based Dr Sejal Doshi, now our head nutritionist, we developed a recipe for producing a chikki-like product called the GudNeSs bar. Each capital letter in the name stands for a separate ingredient in the bar. ‘Gud’ stands for the Hindi word for jaggery, or sugarcane extract. The ‘N’ stands for nuts and nachni, an Indian grain, and the ‘S’ stands for the seeds in the bar, including sesame seeds and flax seeds,” Mehta explained.

In the meantime, Mehta had roped in a few volunteers. One of her early articles on her project published in a Brown University publication in 2011 inspired another graduate student Carlota Pereda Serras to join her. In India, Mona Shah came on board for product development and is now head of Customer Relations and Director of Operations, while her parents – father Dr Hemant Shah, a practicing physician in Mumbai, oversees the medical claims and reach of LBWR, and her mother, an educationist, helps out with devising educational and awareness programmes.

While Mehta provided the basic recipe, it was Mona Shah in India who actually and literally cooked up the GudNeSs bars. “After nearly a year’s experimentation, in August, 2012, we managed to develop a marketable product,” Mehta said. To help start production, she received another round of funding of $3,500 from Swearer in 2012.

One GudNeSs bar contains 14 mg of iron ­– an amount that exceeds the daily requirement set by the WHO for both adult males and menstruating females. The WHO recommends 60 mg of iron per week to treat anaemia, and eating five GudNeSs bars weekly fulfills this requirement with the potential to make a drastic difference in an individual’s outcomes.

Since September 2012, LBWR has adopted a two-pronged approach to combat anaemia in India.

1. Under its Health Scouts Programme, high school students in India are trained to spread awareness about anaemia in their neighbourhoods. This programme currently runs in three different states in India. There are 200 Health Scouts in Mumbai, 50 in Surat and the programme has also recently been launched in Chennai. Additionally, it conducts anaemia testing and treating camps in the slums and rural areas by collaborating with different NGOs.

2. It provides an easy nutritional solution to anaemic individuals by making its iron-rich GudNeSs bars available to them. LBWR has sold over 90,000 GudNeSs bars through schools, NGOs, retail and individual orders. LBWR is a non-profit organisation and GudNeSs bars are sold at the cost of manufacture (`10) and are further subsidised in rural areas and slums as needed.

“We have student teams in India and in the US (Brown University and Duke University) where dedicated and enthusiastic volunteers help expand LBWR’s impact on field and organise our fundraising efforts. We are also working on expanding our product line (introducing more flavours of GudNeSs bars), improving supply and distribution, and are in the process of recruiting more volunteers and staff in India to aid LBWR’s rapid and accelerated growth,” Mehta said.

“Recently we have raised $11,000 through crowd sourcing so as to expand our operations. Our goal is to make our simple solution (GudNeSs bars) available to every single anaemic Indian. We are currently working to make our services more accessible, our efforts sustainable and impactful. Our goal for 2014 is to spread our movement to three additional states (Karnataka, Uttar Pradesh and Rajasthan),” Mehta said by way of signing off.