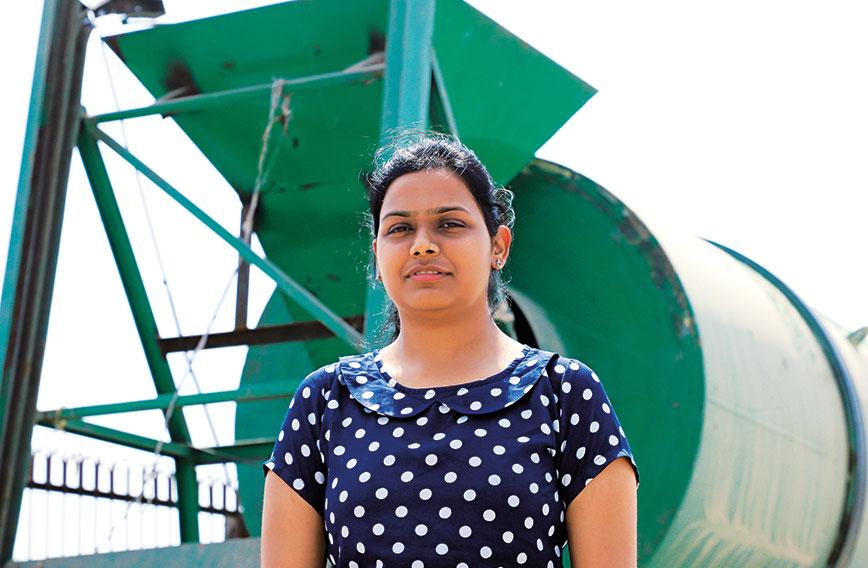 Jasmeet Kaur: ‘The idea is to reduce the garbage being sent to dumping sites’ | Photograph by Shrey Gupta

The Delhi Cantonment area could be on its way to becoming a model for municipalities wanting to separate wet waste from dry and compost it easily at source if the XAPER Mark II 10 machine invented by E3 Waste Solutions lives up to its promise.

The XAPER has been used in a pilot in the cantonment since September 2018 and a report on its performance is expected soon. The machine was invented in 2016 and is a patented technology. E3Waste Solutions has smaller, cheaper versions of it and is hoping resident welfare associations, hotels, factories and other places where a lot of waste is generated install them.

“The primary issue is that waste is not being segregated due to which centralised waste disposal plants are failing,” says Jasmeet Kaur, CTO of E3Waste Solutions, which is a unit of Palta Engineering Works, based in Jalandhar.

The Xaper has a large open drum into which all the waste is loaded. Both wet waste and dry waste slowly circulate in the drum and get segregated. Recyclable waste is disgorged and collected by waste-pickers.

The biodegradable material is slowly churned into fine dry compost due to the air that flows through the drum. This dry compost is ejected through 12-millimetre slats at the end of the drum. Once enough dry compost has been collected, it is put into pits and over 21 days it becomes compost rich in nutrients and minerals.

Under the current system of waste management in Delhi, dry waste and wet waste are collected together, the recyclable material is picked up by rag-pickers and the rest is collected by the municipality and sent to dumps or landfills.

The advantage of the XAPER machine is that it can be installed in colonies, markets, hotels or any place where waste is generated and needs to be disposed of. “The idea is to reduce waste at this level by 70 percent and thereby drastically bring down the amount municipal corporations pay for transporting huge amounts of garbage through the city to dumping sites,” says Kaur. 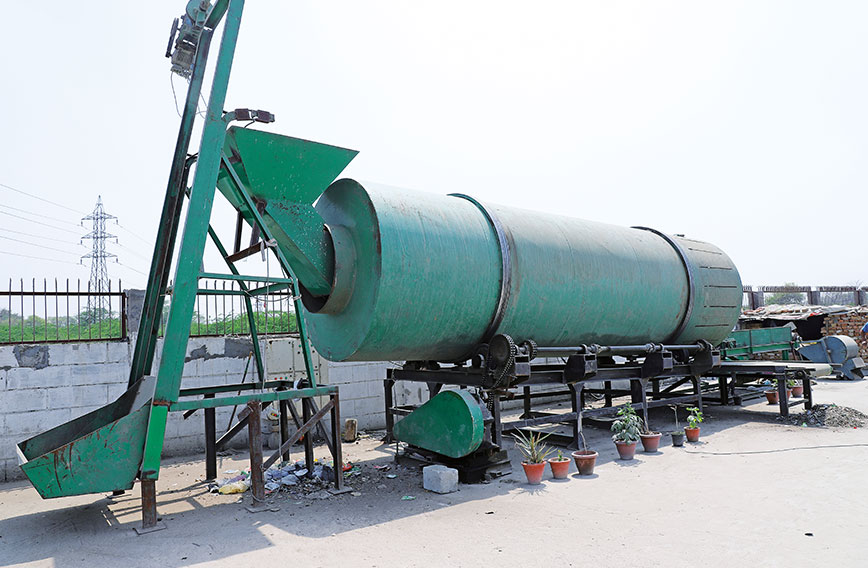 Despite awareness campaigns, orders by the National Green Tribunal and even laws, people just don’t segregate their garbage in households. Delhi, for instance, produces close to 11,000 tonnes of waste a day and none of it is segregated at source. Instead, it turns up at landfill sites or is burnt, adding to the city’s notorious air pollution levels.

“We've suggested to The Cantonment Board will be buying this machine and another three to process all the waste that is generated in the Delhi Cantonment area,” says Kaur. “We’ve also given them recommendations on how Delhi Cantonment can become a zero waste disposal area and a model for the rest of Delhi. Currently, the Delhi Cantonment area produces 62 tonnes of garbage per day. We have advised them to buy three 20-tonne XAPER machines and install them across the area so that day-to-day waste can be dealt with.”

Up to that point, Kaur and her team had tested XAPER only in laboratory settings. To see it workon the ground the way it was designed to, was something else.

“Watching your machine work as per your expectations is a different feeling altogether. We became more confident after that,” she says with a smile.

The XAPER machine chewed through Nawanshahr’s garbage with ease. Unfortunately, after four months of testing, when the time came to take a decision about whether the XAPER machine could stay on, the IAS officer who had first approved it was transferred. 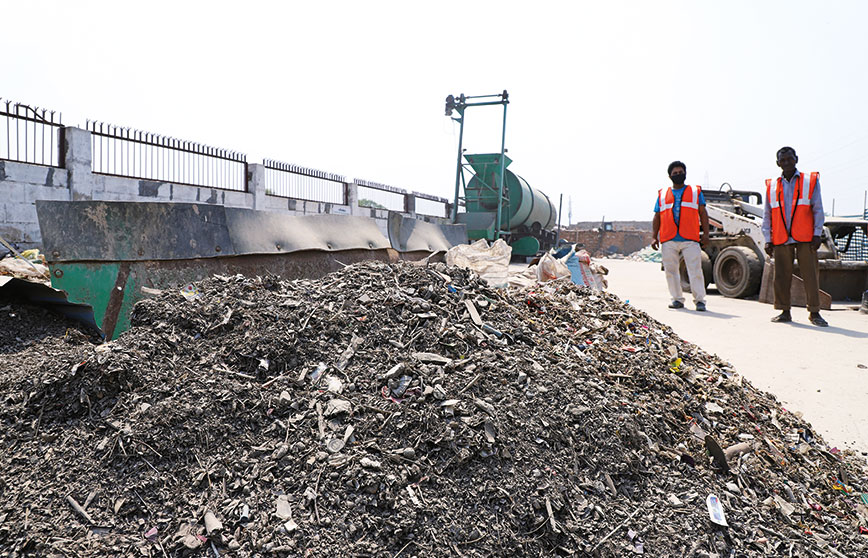 Apart from the Delhi Cantonment Board, the company has found other buyers for XAPER. Their largest machines can handle a load of 20 tonnes of waste per day. The smaller prototypes can handle between 25 and 200 kg of waste per day and are being bought by kitchens and  messes, particularly those belonging to the Army and Air Force.

“We’ve sold about 25 smaller variants to different customers,” says Kaur. “We still get queries for smaller machines but we want to put up larger machines because they are visible on the ground at community level.”

So far E3 Waste Solutions has mostly pitched its products to the public sector, but it will also be targeting colonies, hotels and factories.

Kaur was involved in designing XAPER's machine function parameters and process optimisation. The investment in creating the machine came in-house from a senior member of their team whose family runs a business in rubber products.

The fledgling company hasn’t turned in profits as yet but they do break even thanks to sales of their smaller machines. The 25-kg XAPER machine costs roughly Rs 100,000 while the 20-tonne XAPER costs between Rs 1.5 and Rs 2 crore.

Kaur says their company isn’t looking for investors. It is instead seeking partners. “We are looking for collection and transportation partners, like the Delhi municipal corporations. Secondly, we are looking for processing facilities. We can provide the technology. Finally, we are hoping to partner NGOs. We don’t want people to stop segregating simply because there is a technology to do it. We want NGOs to help bring about behaviour change and create awareness among residents of how to segregate waste the right way,” says Kaur. 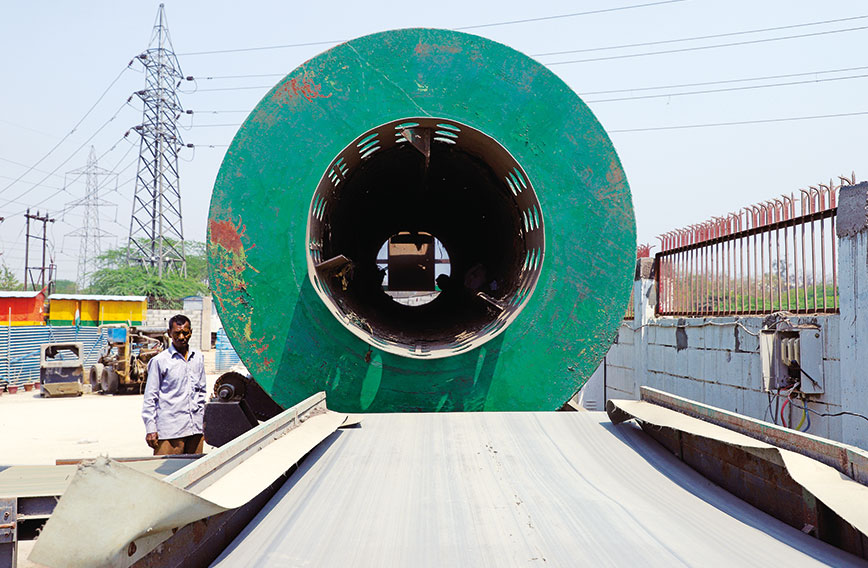 An improved recovery rate enables rag-pickers to earn three times more than what they would make through manual sorting. Currently, at Delhi Cantonment, rag-pickers get paid Rs 12,000 per month plus whatever recyclables they identify. Kaur says they hope to tie up with SHGs for in-house composting.

“We want to be able to work with organisations who have the space and can further mature the compost we create. We can provide the compost and some compost enhancers and they can sell it on their own,” she says.

Ideally, she says, they would like their machines to be operated by rag- picker communities who live near garbage dumps and have an SHG affiliate. Any compost that is created can then be sold by them.