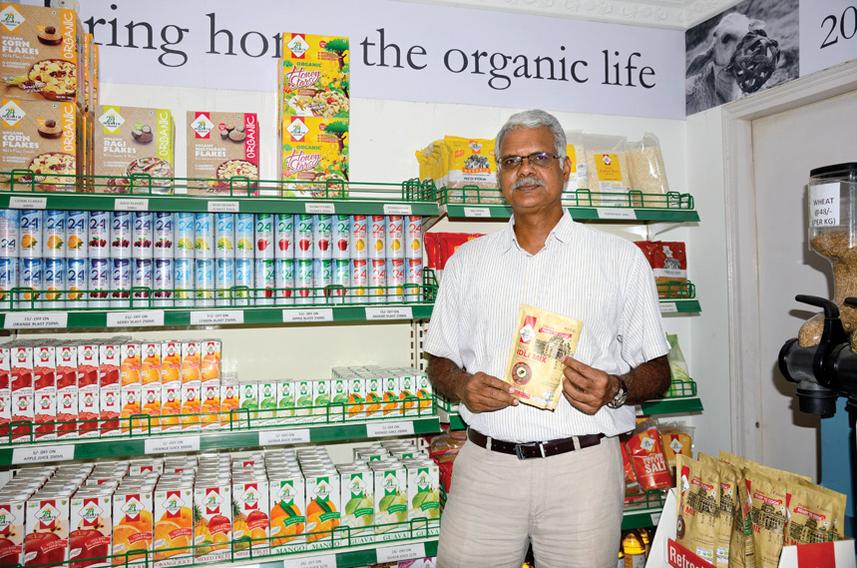 Looking up to Raj Seelam is easy because he is all of six feet and three inches tall. But the admiration he evokes is quite another thing as he tells you about 24 Mantra Organic, his brand for chemical-free foods.

In times when farmers are committing suicide and the rural economy is in deep distress, Seelam has built an innovative and robust business in organic foods and beverages. He’s changed lives and saved homes by getting farmers to move away from pesticides and fertilisers and adopt sustainable agricultural practices.

Based out of Hyderabad, 24 Mantra Organic has quite a fan following in this city. There are about a dozen 24 Mantra stores in Hyderabad. But that is just part of the story because the company has also aggressively gone national. Pick up a product in Hyderabad and you can expect to find it in a supermarket or an independent store in most of the other big cities in the country.

In the 12 years since Seelam founded the company at least 200 products have been put into the market successfully. They range from breakfast cereals to snacks, spices, gluten-free wheat flour and traditional grains like millets. Fizzy organic fruit drinks in cans have recently been added to the list. At the store we visited at Banjara Hills there were fresh mangoes selling briskly.

The company works intensively with some 32,000 farmers in 15 states and helps them grow organic crops on 150,000 acres. For every 200 farmers there is a supervisor especially trained in organic practices.

In every way, this is a business built from the bottom up. It works directly with people in the fields because only then can it be sure it will get produce that has been grown without chemicals.

Shortcuts just won’t do if you are into building brands in the organic space. From what we can see from our first and only meeting with him at his office at Banjara Hills, Seelam is deeply invested in both the company he runs and the idea of holistic lifestyle choices like organically grown food.

For him 24 Mantra Organic is more than a business. It is a reflection of a personal choice in much the same way as customers who buy organic products always agree to pay a little more.

Much of the conviction can be seen in the processing, branding and packaging. A 24 Mantra Organic product is in touch and feel and quality no different from the products that come from long-established food and beverage companies. Ensuring a good organic product is one thing. Mainstreaming it is an achievement of quite another order.

For instance, gojji avalakki is a traditional snack that comes from Mysuru. It is offered by 24 Mantra Organic in a ready mix, which is ready to be served within five minutes of being put in boiling water. The packet lists nutritional facts, allergy warnings and the best organic certification.

Barnyard millet comes as whole grain but is parboiled so that it is easy to cook. Millets are ancient grains that are healthy to eat and, for people who are diabetic, are an alternative to rice. Somewhere in the churn of modern farming the ancient dietary values associated with millets have been forgotten. Through 24 Mantra Organic they make a return to middle-class kitchens.

It was in 2004 that Seelam launched Sresta Natural Bioproducts Ltd. Months later, the brand 24 Letter Mantra Organic was created. It was based on the ancient wisdom of the Sanskrit ‘Tvam Bhumir Apo Analo, Anilo Nabha’ or ‘You alone are Earth, Water, Fire, Air and Ether’. The Sanskrit words added up to 24 letters and so the name, which, Seelam tells us, was given by a copywriter who had turned to spiritualism.

But, for the purpose of mass marketing, the name was complicated. Customers were often confused. So the word “letter” was dropped and the brand became 24 Mantra Organic and is now often just 24 Mantra because that is easy to figure out at first sight and longwinded explanations are not needed.

Products from 24 Mantra Organic draw on ancient wisdom about natural farming practices and nutritional values. The slick packaging, pithy instructions and easy processing serve as a bridge between the past and contemporary times.

As a business, 24 Mantra Organic easily straddles these different worlds. So does Seelam. He has a degree in agricultural science and an MBA from IIM Ahmedabad, but calls himself a farmer.

It was when his father was dying of cancer that he returned to his family’s farmlands on the outskirts of Hyderabad. Before that, Seelam worked for a company selling chemical pesticides and fertilisers. As he travelled through the countryside to promote sales, he would see how pesticides and fertilisers were being used in excess by ignorant farmers, who were caught in a cycle of dwindling yield and rising debt because of the cost of inputs.

“I used to see people dip vegetables in pesticides and spray indiscriminately. Even potatoes were dipped in pesticides and put in cold storage. I won’t blame the farmer because ultimately he has to ensure that he earns something from what he produces. And, of course, such practices stem from a lack of knowledge,” says Seelam.

“That is when I said this is what I don’t want to eat and also most people wouldn’t like to eat this kind of stuff. So I stopped eating a lot of things. I saw farmers go from almost no pesticides to three rounds of pesticides. The second thing was that in the early Nineties farmer suicides were happening. I also come from a farming family. This is not right, I said to myself.”

What about his family farm? Were chemicals used in excess on it as well?

“In a way, my father was an inspiration. He would use one round of pesticide for three crops and get the best yield in a 100 km radius. People would come to him for advice and seeds. I am sure he would have been a successful organic farmer, perhaps among the best, if he had lived,” says Seelam.

There was a time when farming families wanted all hands on board. People took pride in working in their fields. But Seelam’s generation was pushed to get an education and take up jobs. The decline in agriculture had begun in the Nineties.

Seelam’s return was prompted by his father’s ill-health but he was also fed up with selling pesticides and fertilisers and had a yearning to start an enterprise. He tried his hand at a couple of businesses with modest success and then came the idea of an enterprise in organic food.

Seelam travelled around for more than a year, meeting pioneers in organic farming like Bhaskar Save (See Civil Society issue December 2015) and Narayan Reddy. He tried to meet G. Nammalvar. He went wherever someone had done good work in organic cultivation.

“I came back with a belief that we have to marry science to organic. Yes, I think there is some science in traditional practices, but it is crude science. The goal should be to use science in tune with nature and not against nature. This is my belief,” Seelam explains.

Asked what impact switching to organic farming has on the lives of farmers, Seelam says their income increases by anything between 15 and 30 per cent because of the reduced cost of inputs and the premium 24 Mantra Organic pays them. They also don’t have to borrow money any longer to pay for pesticides and fertilisers.

A third gain occurs over the long term. Organic farming methods make the soil more stable and fertile, leading to greater productivity and less use of water. The natural balance of the soil is restored.

Seelam explains: “The way we build soil fertility is by applying a lot of manure and compost. We also rely on crop rotation with pulses and legumes, which fix nitrogen in soil. If crop rotation is not possible, inter-cropping helps in building soil fertility. Wherever moisture is available we recommend the use of green manure or the growing of a leguminous crop for 40 days. It fixes nitrogen in the soil and improves carbon content. The soil is able to retain moisture for a longer time. This is the reason organic fields tend to perform better under stress situations.”

Asked why 24 Mantra Organic doesn’t believe in outsourcing, Seelam says, “We don’t buy from outside primarily because of integrity issues. Let’s say I go to a trader who says he has organic stuff, but I don’t know what kind of detailing has gone into it, what kind of monitoring has gone into it. I have a brand and the consumer has belief in the brand.”

What is Seelam at heart? An activist, a farmer, or a businessman?

“I would say at heart I am a farmer. I also come from a farming family. My father was a good farmer. He has been my inspiration. That’s how the journey started and it’s close to my heart,” is Seelam’s response.

He has proved to be a good businessman because he is careful about being financially sustainable. All organisations have to make a profit or a surplus because it is only then that they control their own destiny.

“Ultimately, commerce is very important. A farmer will really benefit when he is connected to commerce,” says Seelam.

But 24 Mantra Organic also has a strong streak of activism at its core. “I think every business has to have a social purpose. Without that the soul is missing. Money can’t be an end in itself. Consumers are looking for genuine stories. Not stories for the sake of stories,” says Seelam.

In a discerning market, where consumers are increasingly making ethical choices, Seelam, and the team of motivated professionals he has built around him, have shaped a significant presence for their company.