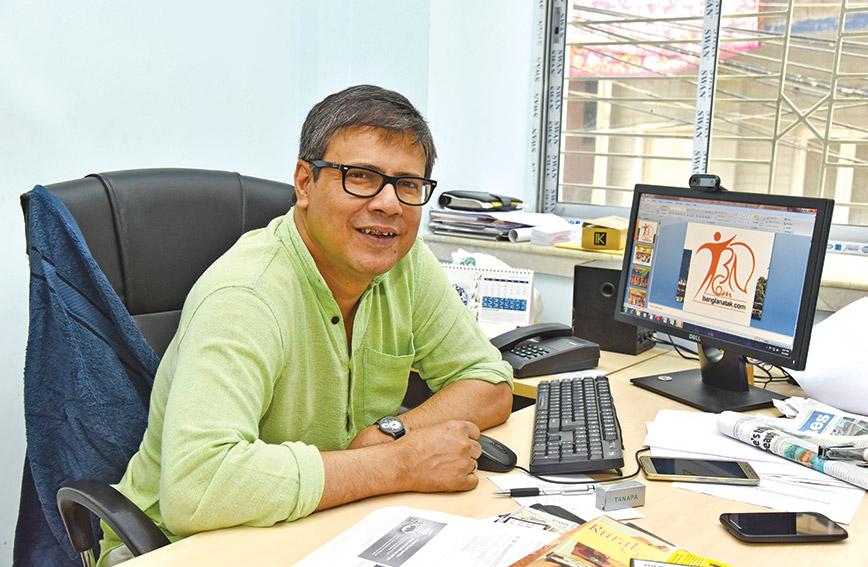 Amitava Bhattacharya, founder of banglanatak.com in his office

When banglanatak.com first started working among the Chhau dancers of Purulia district in West Bengal there were barely a dozen troupes. Today there are 150. Not all of them are connected with the banglanatak.com initiative. The revival that it created caused teams to come up spontaneously from within the community.

The dancers initially earned a negligible amount. For record-keeping, banglanatak.com put down their income as Rs 500 per month. By 2013, the median income had gone up to Rs 3,500 per month, with the top 10 percent earning more than Rs 30,000. There are some Baul singers who have programmes 25 days in a month. Some among them have a monthly income of Rs 80,000-90,000. In a Pattachitra (scroll painting) village the average family income now is Rs 25,000.

Some who never left their village have in their own way become globe-trotters. For 2017-18, banglanatak.com has already secured their participation in eight festivals across Europe. The climax of their annual calendar is the Chhau Utsav held in Purulia which keeps attracting an increasing number of tourist visitors.

Banglanatak.com was started in 2000 by an IIT Kharagpur graduate and former resident of the Bay Area in the US, Amitava Bhattacharya, 50, who, after 10 years with software, decided to return home. “I got a bit bored with software. Becoming a millionaire was not a motivation. We were expecting our first child whom we did not want to be born in the US. Also, as a working couple, we missed the family support system here.”

On coming back, he started travelling and found in rural areas a harsh reality — tremendous poverty and social exclusion of practitioners of traditional art forms. The internet and mobile telephony had not yet spread. Then he realised that “culture was a great tool in connecting, especially the media dark areas”. So he started banglanatak.com "as a tool to communicate, to connect to the rural marginalised people”. Their first vertical was C4D or communication for development. The aim was to get people together and empower them so that they could lead better lives. The focus was on areas like women and child health, sanitation and
the environment.

Then, around 2004, Bhattacharya realised that just communicating was not enough. So he shifted focus from using culture to convey the message of development to trying to see whether local culture could be used to fight poverty. That year banglanatak started ‘Art for Livelihood’ and four years later (2008) renamed the vertical ‘Art for Life’. This was because the understanding of what was livelihood had itself changed. “Earlier I used to think livelihood meant economic empowerment or improvement. Now, with 17 years of experience, I realise livelihood also means economic engagement. Engagement with the world around you plays a great role in a community and can be even greater than empowerment.” 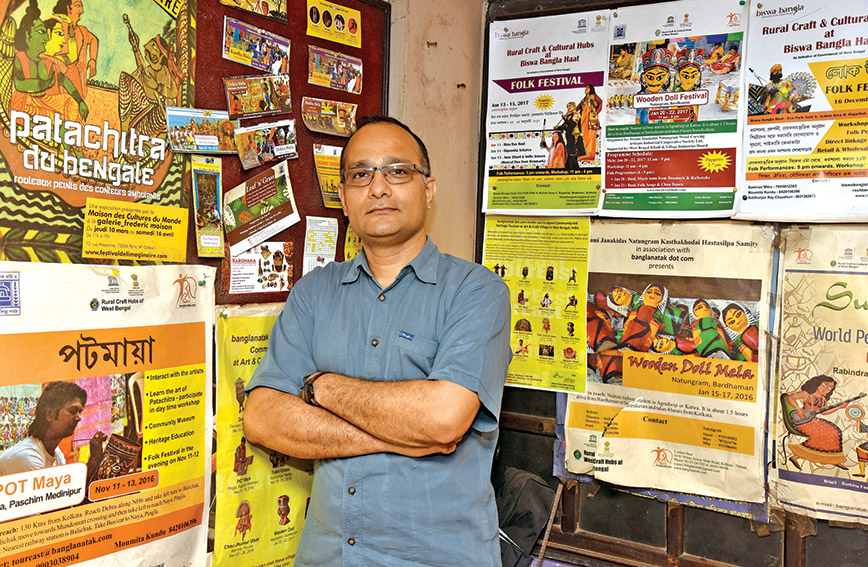 Explains Suman Mukhopadhyay, Director and Vice-President, “The aim was to monetise culture as an asset” so that traditional performers and craftsmen could earn decently and lead better lives. This is art and culture-led rural development which seeks to establish working models that help artist communities gain recognition, safeguard their art forms, improve their incomes and transform their marginalised villages into cultural destinations.

Art for Life has three components: capacity building, providing direct market linkage, and facilitating exchange and collaboration. Adds Bhattacharya,“We have been doing this for 12 years now and it is the flagship initiative of banglanatak. UNESCO evaluated it in 2008 by visiting many villages and started looking at the model very seriously under ‘close observation’.”

A key finding is that it is not just incomes that have improved. So has sanitation. The artistes and performers were mostly illiterate but they all now send their children to school. “The most significant thing was that among the 15,000 people we have worked with, none has left the village and gone to the city in 12 years. We found that once a community travelled up the ladder, their confidence increased and they were able to work in their own way.” 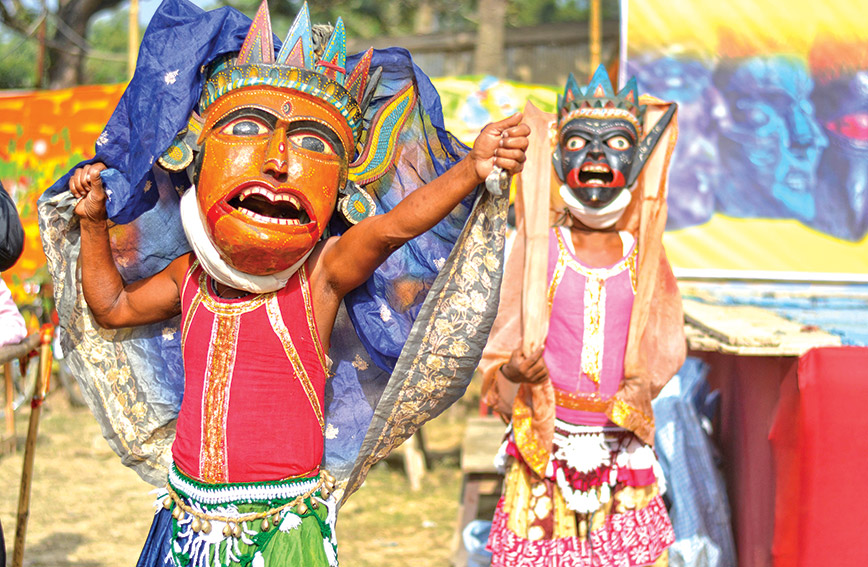 One such hub, for katha stitching, is set between two rivers, the Ajay and Mayurakshi, in Nanoor in Birbhum district, known for its terracotta temples. The embroidery created through running stitches has artistic content and social significance. It offers women a chance to sit around and socialise after attending to household chores. It is also an art practised by both rich and poor. The art element plus the social bonding factor make katha stitching a tradition worth preserving. 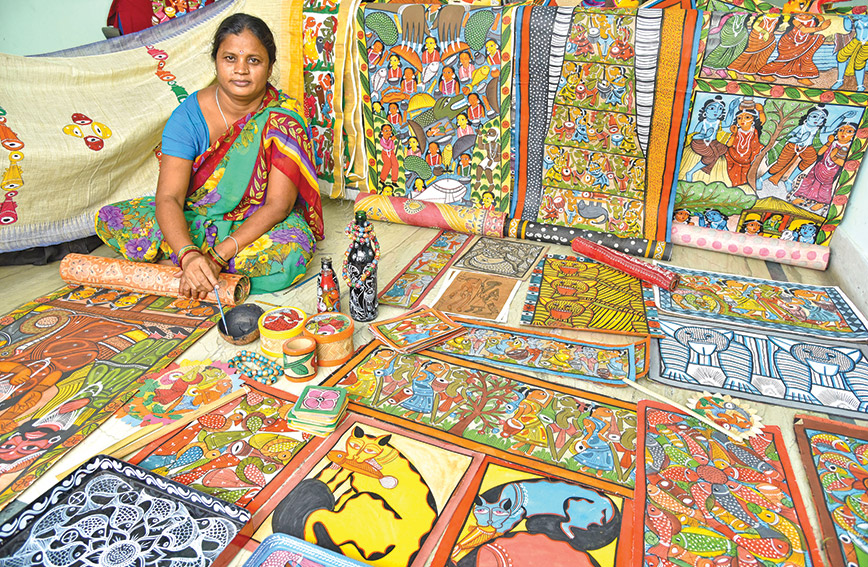 Jaba Chitrakar, 38, the Pattachitra painter, learnt her art (the painting as well as the narrative singing while unfurling the scroll that makes up a public performance) from her husband after she got married at 15. The whole family, including her married elder daughter, lives in Noya village of Paschim Medinipur district and is engaged in the work. Earlier, just four or five households in the village were devoted to Pattachitra, now it is the entire village.

In between, from the early 2000s, banglanatak came in with its work. The financial status of the family changed unrecognisably in these years. After meeting all expenses, the family makes a net Rs 30,000-40,000 a month. They have been able to buy a bit of land and build a pucca house. Earlier, Jaba’s husband would hawk his scrolls on foot across villages. Today, there are three melas where they sell their work.

Earlier, they produced only scrolls on traditional themes like Krishna leela and the epic story of Manasamangal. Now, themes include the tsunami of 2004, Nirbhaya and 9/11. IIT Kharagpur commissioned them to do works on public health, malaria and vaccination. An Australian university got them to tell the stories of Rupert Murdoch and Julian Assange. Recently, an assignment has come from the state government for a scroll and performance for its Kanyashree programme on girls’ education.

Jaba can barely sign her own name. Her father died when her mother was carrying her. She recalls how as children they would sometimes seek alms in the village to get by. Today, her younger daughter, who is 15 and has studied up to Class 8, is fluent in Hindi and English and does the job of interacting with tourists. 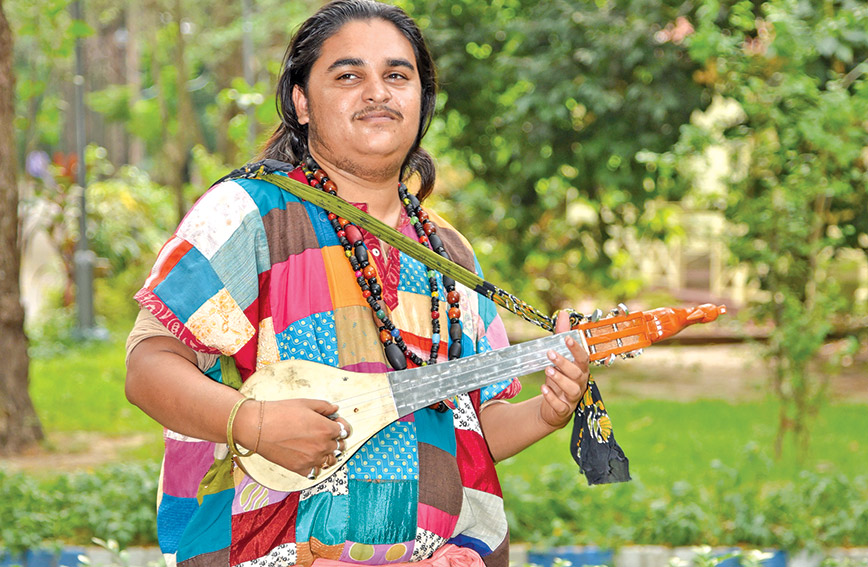 Sumanta Das Baul. This  form of singing was fading away

Sumanta Das Baul, 27, from Subhas Palli in Birbhum district, belongs to a Baul family which is part of the Sahajia sect among Bauls. He learnt from his father and then from his guru, Sadhan Bairgi, with whom he lived for a time. He has been performing in public with his father since he was a child. Now his father is part of his team. For the last 10-12 years he has been performing on his own with his team of accompanists. He is sure his son, now three-plus, who can already handle instruments, will take up the tradition.

The repertoire of old Mahajani songs has not changed. But the rendering has. Being able to afford a harmonium with which to practise has improved tunefulness, practice with percussion instruments has improved rhythm. A change which has a plus and a minus is the need to be away from home for the better part of the month, performing across the state and the country. From having to mostly perform in neighbourhoods and seldom onstage, now, sometimes, during a festival, an entire evening is devoted to Baul music. Income, which was earlier barely Rs 500 a month, is now Rs 30,000.

As these hubs have taken root, banglanatak has discovered a new byproduct. These villages have unknowingly evolved as cultural destinations. Visitors, desi and videsi, are going to these villages according to their own schedule, staying there, interacting with artistes, placing orders, the income going directly to the artiste cluster. So the hubs and tourism have got interlinked, giving rise to a new vertical, TourEast. Under this, to support the visitors, banglanatak has built community museums incorporating the history of the village, the story of the artistes, their family charts.

As soon as cultural tourism emerges — banglanatak now organises 16 tours round the year at craft hubs — a village’s perspective changes. You need a meeting place for visitors, guides to indicate what is public and private space. So banglanatak has added tourism-related capacity building to its agenda. This includes new media which is not only helping the marketing but changing the aspirations of the local youths. The younger generation, who were drifting away from the old vocations, are returning. There is a rise in income, recognition and reaping the fruits of new media, making up an inclusive, sustainable road map for development.

Initially the average age of Baul singers was 57, now it is 43. A unique transformation has happened in a village where women practising the art of Pattachitra initially lived virtually on alms. Now each house has a toilet, can offer homestay to tourists and the village is so clean and tidy that it is in great demand for holding marriages.

Banglanatak.com began with a staff of 12, now there are 90 people. It has offices in Kolkata, Delhi and Goa. Entirely funded by grants, in its first year it secured grants of Rs 14 lakh, last year (2016-17) it secured Rs 8.5 crore. In 2009 its work reached 3,200 families in West Bengal, today it reaches 15,000 and in Bihar 1,500. This means affecting the lives of around a lakh of people. It operates through two legal outfits, Island Informatics Ltd, set up in 2002 as a for-profit organisation, and Contact Base, a not-for-profit society.

An engagement which banglanatak likes to remember is organising over 10,000 shows (each with a performing team of seven had an audience of around 250) across eight districts in Bihar in 2012 on safe motherhood. It was part of a project of the Bill and Melinda Gates Foundation with the Bihar government, for which the BBC Trust handled the communications portion. banglanatak came in for last-mile delivery and scored credibly in the post assessment done by ORG-MARG.

Banglanatak is trying to put to good use what it has learnt from its own processes by introducing a new vertical, development consulting, from 2012-13. IIM Kolkata has a course on media and entertainment which was entirely commercial entertainment-oriented. banglanatak has helped them reshape the curriculum a little by incorporating a small part on rural culture. It has worked with a Korean organisation, a UNESCO tier two partner, Ichcat, to organise a conference on NGOs working in South Asia on culture and development. Thereafter it worked with them on learnings to be gleaned from the best among the NGOs through case studies. The consulting also supports the government on policy and IIM Kolkata in raising the profile of social entrepreneurship.

Another recent initiative is MusiCal, an offshoot of Art for Life. When banglanatak saw city youth singing Baul songs to their guitar accompaniment it decided to create a forum to connect them to the traditional masters, the grameen Baul. This would strengthen both. The grameen Baul is a challenge for the city youth as he (the grameen Baul) can drift away from the tune but his emotional content and presentation remain powerful. The urban youth, who is not part of the Baul tradition, needs a reference, a celebrity stamp.

So banglanatak took over the courtyard of Soumen Thakur’s home on south Kolkata’s Elgin Road and has been holding cultural programmes there every weekend. It gives an opportunity to both the unrecognised city performer and the village artiste. That space, named Akhra Baitanik, has emerged as a folk hub in the last six years. Those who perform well are helped to go forward. The hub festivals are organised by Art for Life while the teams are selected by MusiCal which also managed the international collaborations.