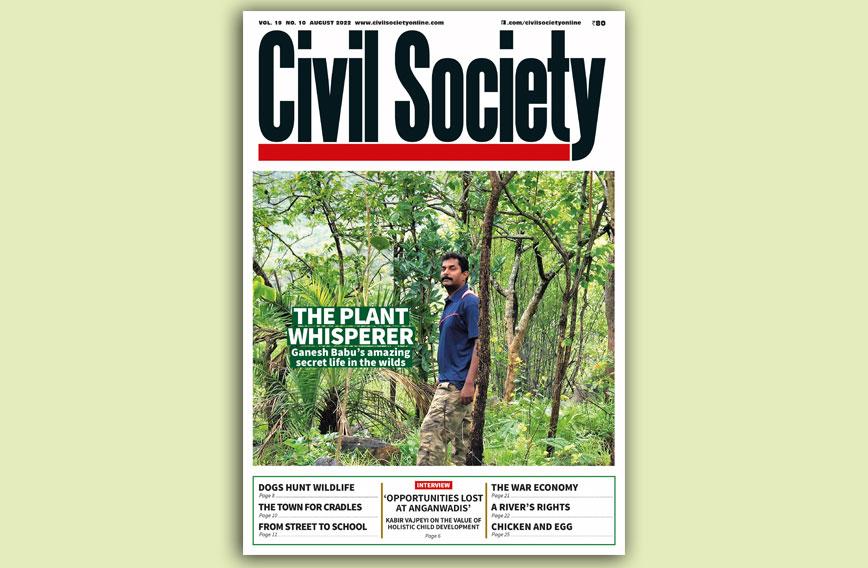 The plant world and what it means to better healthcare

SO much attention has our page on medicinal plants attracted from readers over the past year that we decided to put the man behind it on the cover of this issue of Civil Society. Ganesh Babu is a gifted botanist and an insider to the world of plants in ways that go much beyond the botanical knowledge that he has at his command. He is intuitive and insightful and deeply connected to traditional medicine and its use of plants for public healthcare. Medicinal plants are under threat for two reasons: poor preservation and diminishing knowledge about their uses.

What we know about them has come from how communities have cultivated them and used them. But that is changing even though Ayurveda and folk medicine continue to meet public healthcare needs on a large scale.

Ganesh plays an important role in creating awareness about plants. By identifying them and preserving them, as has been done at the repository created by FRLHT in Bengaluru, he is also instrumental in making them available for future generations. Ganesh makes a yet bigger contribution by acknowledging his mystical and subliminal connections with the plant world. He talks to them and connects with them in ways in which he believes they remain in communication with one other.

Books like The Hidden Life of Trees and The Secret Life of Plants have explored plants in this dimension. Ganesh lives it in the course of his ceaseless journeys of discovery. Thanks to the work done by Ganesh and FRLHT, tens and thousands of homes and schools in south India have been growing and using medicinal plants. This is seminal work which should be applauded. A bridge is also created by such efforts between western science and traditional Indian systems of medicine. The future of healthcare is in such integrative initiatives.

Our interview with Kabir Vajpeyi provides several insights into the functioning of anganwadi centres. At stake here is the integrated development of the child from an early age which has been further underlined by the New Education Policy. Kabir and his wife, Preeti, are architects who 26 years ago began using their skills to enhance learning through better design of government schools. For the past seven years they have been employing that valuable experience to improve anganwadis. In our interview Kabir provides a ringside view of the many challenges that anganwadis face, from badly designed kitchens to dysfunctional toilets and unsafe water supply.

Finally, we received much appreciation and some criticism too for our story on stray dogs. To take our stray dog coverage further we have in this issue a feature on how dogs are harming wildlife in sanctuaries. So, it is not just an urban problem but one that is engulfing the country and needs to be addressed quickly.