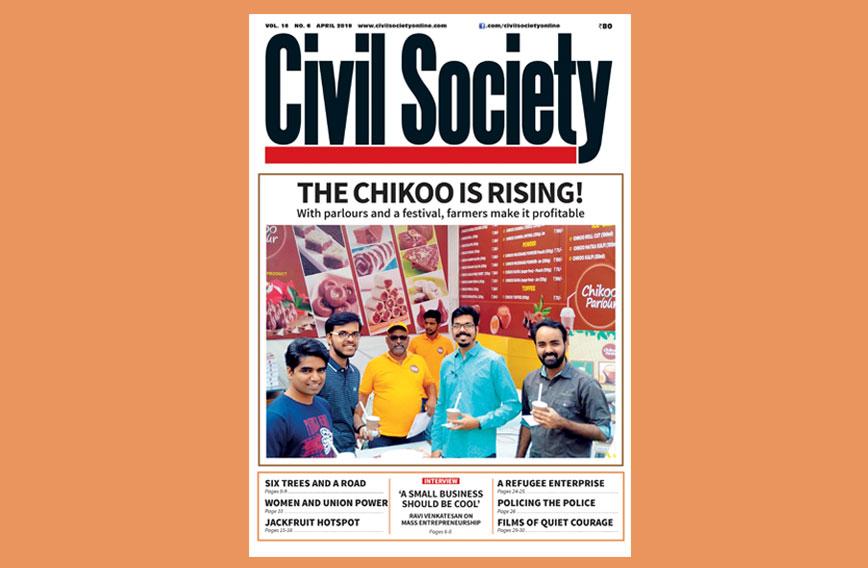 Blessed is the small business for it is the future

The agrarian crisis has everyone worried. But the coolest solutions seem to come from farmers themselves. We have found this time and again in this magazine. Given half a fair chance, farmers know to sort out their problems.

Take the example of chikoo growers in Maharashtra who are our cover story this month. Traditionally these farmers have nurtured the fruit with distinction, but got little compensation for their efforts in wholesale markets where middlemen call the shots. Now they have become entrepreneurs and gone in for value addition. From chikoos they have made ice-cream, sweetmeats and even wine! Chikoo Parlours have been opened.

Entrepreneurship does things to people. It makes them see their world differently. Opportunities emerge where none seemed to exist. Inherent in the ability to take risks is the willingness to move on. Indian farmers have for far too long been locked into contexts which are not of their own making. They need to be freed up to make their choices and explore the possibilities that an expanding economy and empowering technologies offer. The products farmers are now making with chikoo come out of innumerable small businesses, which generate earnings and employment on a scale growing of the fruit alone could not have achieved.  If governments want to do a good turn by farmers they should give them access to markets, finance and technology and help them find the advice that would make them competitive instead of being beholden.

Our interview with Ravi Venkatesan is about mass entrepreneurship. It is the kind of thing you see the chikoo growers doing. If we could have a vast number of small businesses in India, and if the young could be encouraged to set them up, we would be unleashing enormous pent up energy in the economy. Small businesses create employment and meet local needs.

They promote a sense of independence, which is stimulating for the economy as opposed to a job-seeking orientation. Small businesses are particularly needed in rural India — both to add value to agricultural produce and also to help the young make a transition from a life in the fields to something more aspirational but not necessarily in the big cities.

Venkatesan has founded GAME or the General Alliance for Mass Entrepreneurship. GAME’s co-founders are Madan Padaki and Mekin Maheshwari.

They will be working closely with governments and NGOs to trigger significant change. It won’t be easy because it will mean beginning at the school level and working upwards from there. Socially there are deep- seated biases against running small businesses. Nevertheless this is an interesting and timely initiative.

From Chittorgarh in Rajasthan comes a story about improving anganwadis to deal with malnutrition. A growing number of NGOs now work in anganwadis, which is good because they should be the sentinels for what is happening with very small children. Nutrition remains a big problem even in high-income states like Delhi.