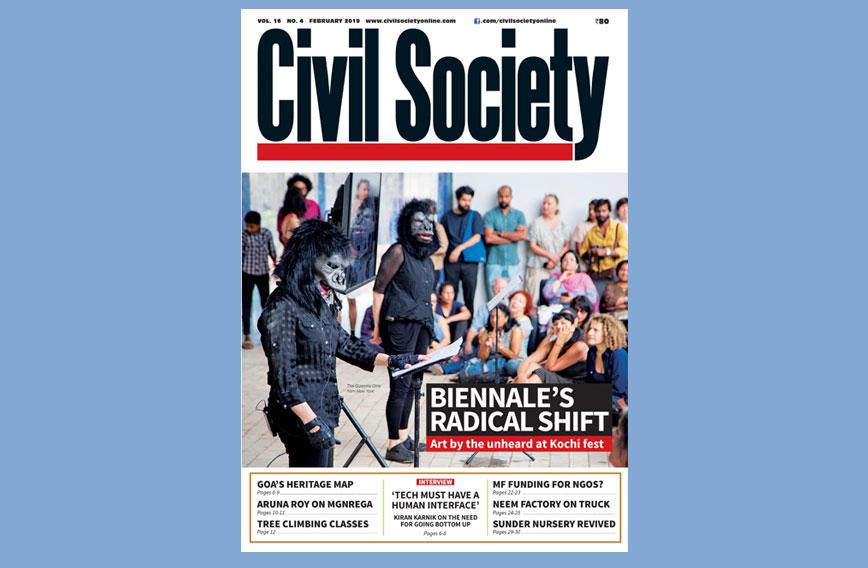 Free-falling spaces enrich a democracy. The Biennale held in Kochi, which is featured as our cover story this month, is one such space. We should value it because we unfortunately live in times when the opportunities for discussion and self-expression have been drying up. You could say that for the world as a whole and definitely for India. We should first of all blame ourselves for not being assertive enough in protecting our freedoms. But it is also true that over time structures have come up in which governments and corporations have acquired the power to decide what we should see and read and say. The result is a predictability that makes our lives sterile. So entrenched are they that it is difficult to shake them and claim back space. The decline is now noticeable.  Campuses, for instance, are bereft of their old energy. The media seems to have lost its relevance and purpose. The voluntary sector is treated with suspicion instead of being celebrated for the creative force that it can be. Just when we should be pushing our boundaries as a nation, we seem compelled to conform. The rare occasions that we break free, such as the Biennale, are those that we should cherish because they are reminders of the diverse kinds of nourishment we need for going forward.

Speaking to us for the lead interview of this issue, the gentle and insightful Kiran Karnik makes several important observations on the appropriate use of powerful technologies to promote development. Significantly, he bemoans the lack of discussion and debate in the country. There is a need for platforms on which differing views and perceptions can be shared. In the face of multiple disparities, a bottom-up approach is actually indispensable. But the reverse has been happening, especially with technology, which is hurriedly seen as a silver bullet. On the other side, there are those who have an entrenched suspicion of technology and find a design and a conspiracy in everything. They  also do a lasting disservice to the country. A case in point has been Aadhaar, which needed to have been implemented with sensitivity and awareness of realities on the ground.  Activists and social scientists had several important concerns and suggestions which were overlooked. Was it because of their unwillingness to engage or the arrogance of a few who believe technology is the answer to all problems? Both, undoubtedly, but what is truly worrisome is that we seem to have lost the stamina for consensus building. It is in this that we must see a breakdown. The Supreme Court finally decided on Aadhaar, but a courtroom is no real substitute for the give and take and pooling of ideas that should take place in society.

The rural employment guarantee scheme has its well-known supporters and opponents. But much beyond the differing views there is the stark reality of rural distress. We spoke to Aruna Roy on what has been ailing the scheme on the ground. There is little doubt that governments haven’t been implementing the scheme with the serious intent that it deserves.

Finally, non-profits have been increasingly finding it difficult to raise funds for their causes. There are many reasons for this, but the lack of funds is certainly not one of them. So how best to connect donors and NGOs? The Quantum Mutual Fund has come up with a Systematic Giving Plan (SGP) for its investors. Will it work? We try to figure it out in our business section.