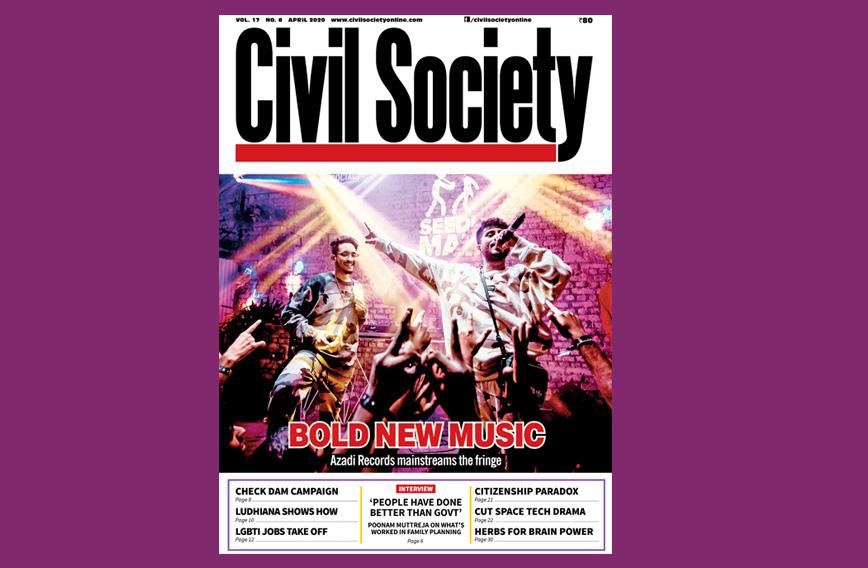 Fringe to the fore

Consumers invariably end up taking what they are given. Someone somewhere shapes their decisions even as they may live in the belief that they are making their own choices. New entrants to the party either have to bide their time till they get noticed or they should know to muscle their way in. Ask us at Civil Society.

Azadi Records, which is our cover story this month, has enriched the Indian music scene by identifying little known musicians, singers and other performers like DJs and connecting them to audiences. It has helped some great talent find wider notice.

Is it important? We think it is because the music and personal histories of the performers add up to give us a picture of India we are perhaps not exploring enough or may be missing out on altogether. The songs, lyrics and singing styles reflect the angst, beliefs and hopes of a new generation.

Azadi Records therefore plays the very useful role of taking us beyond Mumbai, Delhi and the other big cities to help us discover an India we tend to ignore. The use of Azadi in the name invites controversy. But the founders tell us a political slogan is the last thing they have in mind. In fact, they would like to reclaim the word for the wider meaning it has in relation to the freedom of expression and the rights of performers and audiences to explore new choices. This azadi reshapes the market.

Our opening interview this month is with Poonam Muttreja of the Population Foundation of India. Poonam is one of the veterans of the social sector and she has been featured before in our pages. It is always good to interview her. But this time the occasion is special because it is 50 years of the Population Foundation of India. Poonam went to the foundation from an earlier assignment and revved things up there, as is her style.

Stories of successful community action come from Punjab and Karnataka. In Ludhiana, residents have intervened to ensure that public money is properly spent on improving the Buddha Nullah, which is a tributary of the Sutlej, but has been reduced to a drain. The government had awarded the job to a contractor. The residents have insisted that scientists and engineers of a certain standing be consulted.

In the Dakshin Kannada district, a zilla parishad member has rallied college students to build a series of temporary check dams at low cost. The idea is to catch the rain before it flows off and thereby raise groundwater levels.

The medical profession tends to get more public-spirited these days. Check out our interview with Dr Prabhu Prasad of Manipal Hospitals who has set up a voluntary organization to promote palliative care in pulmonology. It is a great effort in a country choking on pollution.

We also have our regular columnists whose popularity among our readers has grown with every issue. Kiran Karnik reminds us that the Indian space programme was primarily intended to promote development. Sanjaya Baru tracks Suresh Prabhu’s use of “the rootless are ruthless” to the Iranian rap performer Nadia Tehran! R. Balasubramaniam continues his insightful journey into rural India. Jagdeep Chhokar explores the issues around electronic voting machines.