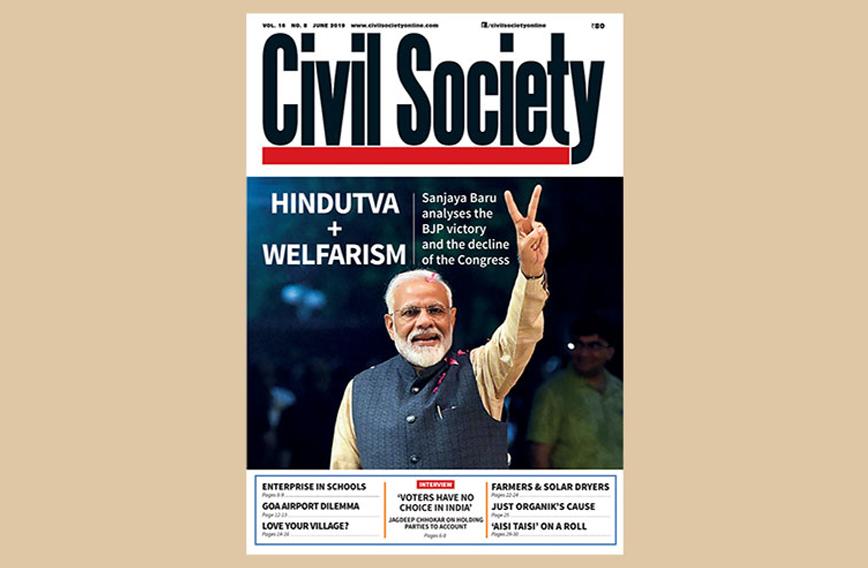 In this magazine we prefer to keep ourselves out of politics. Of course, as journalists, there would be no question of a political agenda on our part. But it is with stories that go beyond politics that we like to engage. Often, such stories tell us more about political realities than the cut and thrust of politics itself.

An election is a good time to see how all the concerns and aspirations add up. Narendra Modi’s appeal to voters, particularly the poor, doesn’t surprise us. He has been seen as a doer who has delivered real benefits to people. But the huge size of the mandate and the seemingly untrammeled power that goes with it sends out a message that needs to be better understood. The verdict is as much about Modi as the comprehensive rejection of the opposition. Flawed as our democracy might well be (see our interview with Jagdeep Chhokar of Association for Democratic Reforms) the mandate given to Modi comes at the end of a full five-year term. He has been judged on performance. To offer a perspective on the results, we asked Sanjaya Baru, our columnist and a keen political observer, to write the cover story this month.

In yet another example of how farmers are successfully dealing with their problems, we have a story from Maharashtra on solar dryers being used to dehydrate and package vegetables and get a better price for them in markets beyond Nashik. Getting a good price for their perishable produce is a problem farmers face nationally.  When there is oversupply farmers are at the mercy of the market and, at times, even find it cheaper to let their vegetables rot in their fields. A farmer producer organisation near Nashik has been alerting its members about a glut and helping them dehydrate vegetables like bitter gourd so as to be able to reach a new range of customers. The solar dryer makes it easily possible and there is a strong case for making dryers cheaper so that farmers can afford them.

Environmental disputes indicate how poorly regulation is working. Yet another example comes from Goa where a new airport has been cleared but a commendable public effort has revealed that the environment impact assessment (EIA) report had overlooked the need for cutting thousands of trees and jeopardizing forest cover and innumerable water bodies. It took the intervention of the Supreme Court to have the EIA annulled. A new EIA is in the making, but where does that leave the airport? With some transparency on the part of the promoters and the state government, the delay could easily have been avoided. There could also have been better scrutiny of the EIA in the Union Ministry of Environment. Pushing projects through by stealth no longer works. If regulators fail to do their duty, people step in as has happened in this case. The Rainbow Warriors in Goa deserve special praise.

In these stressed out political times, it is great to have a show like Aisi Taisi Democracy so that we get a chance to laugh at ourselves. The success of this wonderful stand-up satire, which spares no one, is a welcome aside to the recent elections.