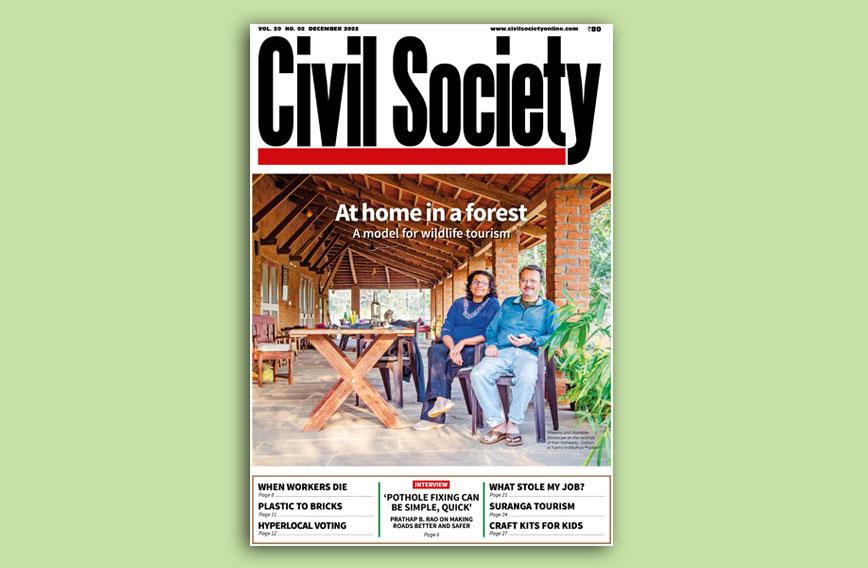 On the wild side: Wildlife, potholes and construction

INDIA is teeming with biodiversity. Animals, birds, insects, plants, trees, water bodies — there is more than one can hope to see in a lifetime. It is a wealth of natural resources that offers an opportunity to earn and create local prosperity. Conservation can be profitable and result in livelihoods for local communities. Many things are possible and one way is wildlife tourism, but in India it sucks. You have a choice of dumb CPWD kind of facilities or rapacious and low-quality private operators or extremely expensive five-star facilities. They all come with a heavy footprint. Wildlife, on the contrary, needs a light touch and sensitive programming. It involves accessing nature but not disrupting and disturbing it. Local talent and resources and traditional knowledge cry out to be employed.

Our cover story this month is an example of what wildlife tourism can really be. Sheema and Aniruddha (Jhampan) Mookerjee have turned their home into a homestay, named Salban, on the periphery of the Kanha sanctuary and in doing so have created brilliant access to not just the forests where tigers are sighted, but also a whole lot else which begins with the way their house has been built and extends to the grains and fruits that they grow. To stay with them is to partake of an organic lifestyle. It is to respect nature and explore it gently.

The Mookerjees’ homestay is an example of what Indian tourism could be. Other examples also exist. For instance, homestays abound in Sikkim and have a great record. Civil Society did a cover story on them some years ago. There are other farmstays as well from north to south. In this issue we have in our Living section a feature on how the unique suranga tunnels in Kerala’s Kasaragod district are being developed into a tourist attraction. So, there is stuff happening, but not enough. The reason for that is the absence of a vision for India’s grand natural resources.

Governments that knock voluntary organizations make a big mistake. From SHGs to NGOs they are all needed because of the focused and creative energy they represent. Who would think a former fighter pilot in the IAF would have a solution for potholes. But that is exactly what Prathap Bhimasena Rao has devised, making it so much easier now to fix a pothole and even lay a whole road. He calls his outfit PotHoleRaja — the name itself being an indication of how much the unorthodox matters. Our opening interview this month is with Rao.

We have made note of construction workers dying at building sites. Many of them have just fallen off structures. So, what’s happening? Why aren’t basic safety measures in place? We decided to count the accidents, based on news reports alone, and found that a whopping 84 deaths had occurred so far this year.