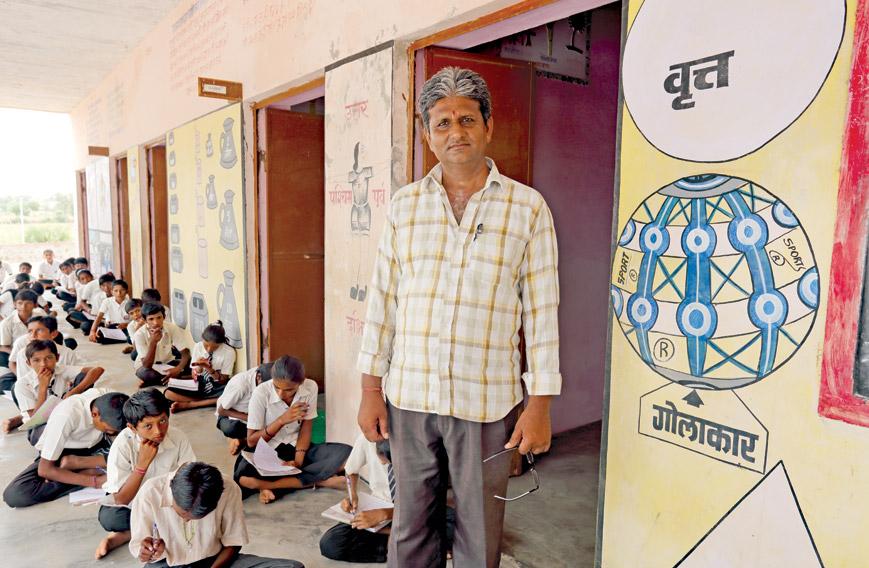 A school needs good teachers to serve its purpose, but it also needs good administrators. Gautam Sharma is that. In Bool Gaon, in Rajasthan’s Barmer district, Sharma is responsible for the transformation of a government school.

Sharma has made sure that the school has a compound wall, running water and separate bathrooms for boys and girls. These contributions may seem small but they have gone a long way in improving the school’s infrastructure.

Getting teachers to plan how they are going to teach courses over the year, and setting up a system to review their progress have improved the quality of education. Students no longer travel 20 km to a private school. With leadership and simple solutions, Sharma has brought Bool Gaon’s government school on a par with a private school.

Below is a piece by Umesh Anand that appeared in Civil Society's September-October 2016 edition. Read on.

Bool Gaon is the kind of place you cannot get to easily. Even Google doesn’t lead you there. Its 1,200 residents are so accustomed to their remote life in the midst of the desert that they don’t expect visitors.

But distant as they are, and much beyond their own expectations, the residents of Bool Gaon now have an address that puts them on the map — it is the government upper primary school.

Recently, the school was adjudged the best among other schools in its category in Rajasthan’s Barmer district. There is a certificate to show for this distinction. But much more important is the transformation that the school itself has gone through in the past six years. Such is its reputation now that Bool Gaon's children no longer 20 kilometres every day to a private school. In fact children from other villages come to Bool Gaon.

The upswing at Bool Gaon’s school began when Gautam Sharma arrived as headmaster in 2010. Sharma, 48, had been around a bit in the government school system. He had been a successful headmaster elsewhere and he had a nodal function in the Sarva Shiksha Abhiyan. He has just been transferred again, but the success of the Bool Gaon school is the result of efforts he led.

Sharma came with lots of experience and a worldview that contrasted sharply with Bool Gaon’s own seclusion. A man of few words, he is at heart an organiser. He quickly got down to work by talking to influential residents of the village and activating the School Management Committee.

“I told them together we could do a lot for the school. I immediately identified the need for a new building for the classrooms, which till then were just two cramped rooms. We needed to build three more rooms for classrooms and a room for the headmaster and staff, where we are now sitting. I called a meeting of the school management committee (SMC) and we made a proposal for a new building to the Sarva Shiksha Abhiyan, which provided the funds. It took a year to complete. We also needed tables and chairs for which we went to the panchayat,” says Sharma.

“Infrastructure is very important. I place a lot of emphasis on it. When a school looks good and facilities are in place students want to come to it and take their studies seriously. The teachers also take their teaching seriously,” explains Sharma. 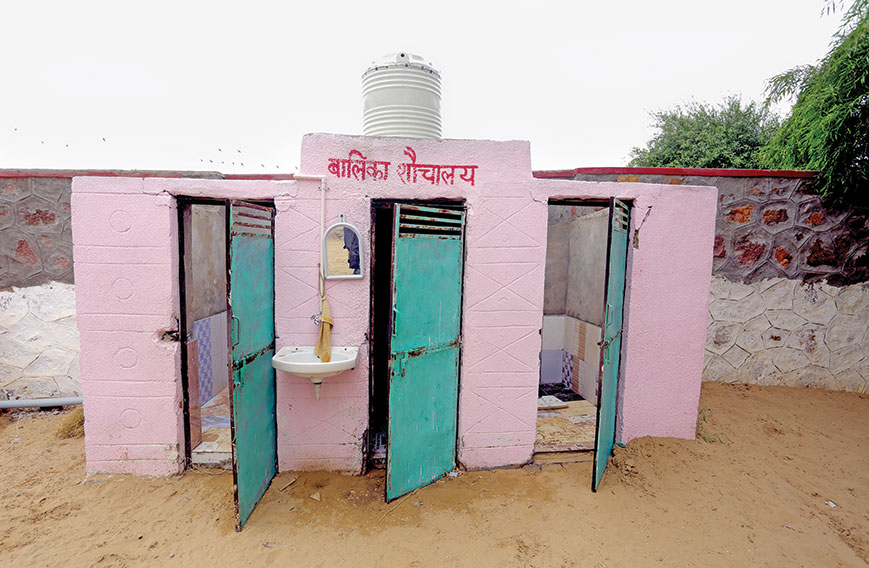 He has created separate bathrooms with running water for the boys and the girls. The bathroom for the girls has a mirror outside on the wall. There are also bathrooms for the teachers. The running water comes from the simple innovation of filling overhead tanks from a tube-well.

“Earlier water had to be brought from elsewhere and filled into our well. I told the committee that it was important that the school have its own source of water. I said we should draw up a proposal for the waterworks department so that we can have our own tube-well. We sent the proposal to the waterworks department. The government passed the proposal and a tube-well was installed. We then spent Rs 1 lakh on pipes and overhead tanks. Now there is water for the toilets and for the children to drink. There is no problem of water,” says Sharma.

The school compound is as green as you can get in the desert. So there are trees and smaller plants, which provide welcome relief in harsh surroundings.

The school wall used to be a low one. Sharma has had it raised by three feet to eight feet so that the school is well delineated and the children are secure and aren’t disturbed. There is sufficient space to play, but an important addition has been an extended stone patio. It is used for the prayer and yoga session every morning. Sharma calls it a ‘manch’ or stage. But it is really a rectangular extension from the classrooms. 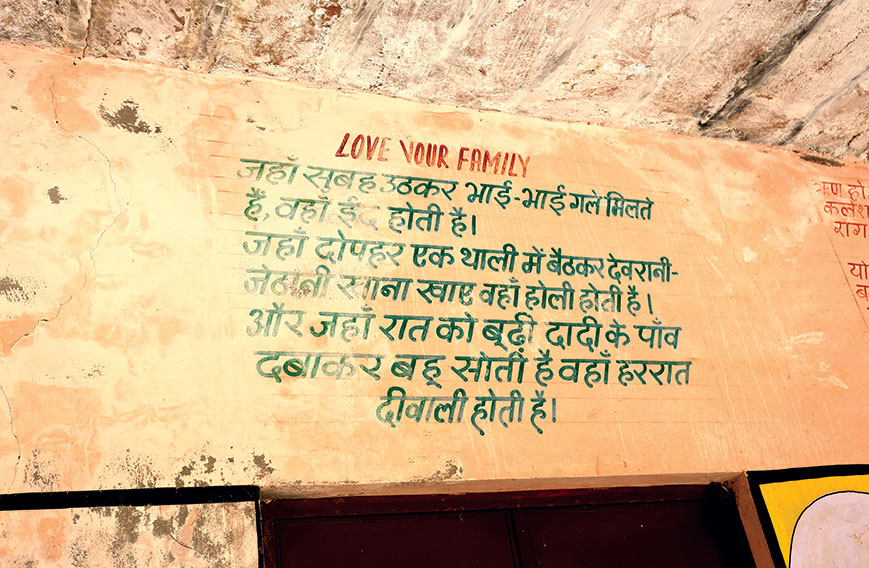 The walls inside and outside the classrooms are covered with colourful drawings, rudimentary graphics and inspirational messages. In this way the children get to learn about weights and measures, the alphabets in English, the importance of family values, the need for cleanliness and washing of hands, maps and the national anthem.

“We have done all this with funding from the government and panchayat and donations. For good work there is never shortage of money. There are many problems with the school system. There are many challenges. But I believe that if you want to improve things you can,” says Sharma.

“When I joined here there were 103 students. Now there are 159. Children who used to travel 20 km to a private school have taken transfer certificates from that school and joined here. I spoke to families in the village and explained to them that there was no need to send children so far. All the local children now come to this school,” says Sharma.

The number of girls attending the school has gone up but slowly because it was important to make people aware. There are two concerns here — one of the need to educate girls and the other of safety.

The building of the additional classrooms made a difference. It has given the school a bigger presence. When they were built, priests were brought from Haridwar to conduct a three-day religious ceremony. At that ceremony the village took a pledge to abstain from alcohol, tobacco and other intoxicants. As could be expected the pledge hasn’t held, but Sharma has tried to bestow the school with sanctity in the eyes of the community. He has also sought to emphasise the importance of family relationships through prominent messaging on the school’s walls. Some of the messaging is patently patriarchal when it talks of the daughter-in-law pressing her in-laws feet every night. But this is male-dominated Rajasthan and Sharma’s is clearly a conservative voice. 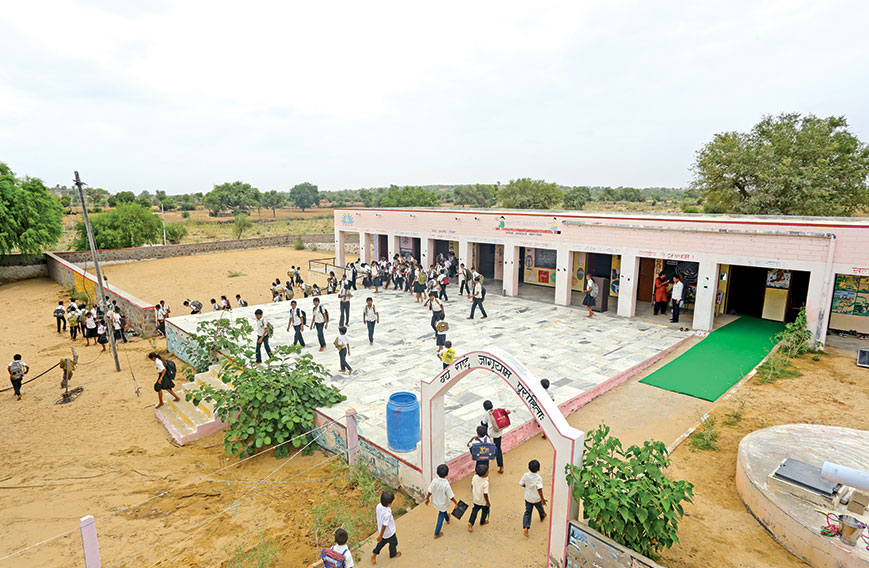 Perhaps it is his conservatism that makes him more successful in the leadership role he plays with the teachers, students and the community at large. It also helps that he is pragmatic and understated. He has the ability to lead without imposing on others.

He has also been focussed on putting systems in place. The morning assembly is important. Children lead the prayer. They read out from the newspapers. There is a children’s parliament with representatives who are expected to be involved in the running of the school.

When Sharma came to the school he conducted a baseline survey to understand the capabilities of the students. They were divided into categories A, B and C. Those in the C category get the most attention because they have learning issues and a lot of catching up to do.

For an hour every week, teachers help students with e-learning on a computer at the school. This is for English, mathematics and science. The e-learning is meant to deal with difficult concepts that the teacher may not be able to handle in class.

Sharma has been getting the teachers to plan how they are going to teach courses over the year. The teachers also meet once a month to review how much has been accomplished, the problems they face and the progress of students.

Ram Singh, head of the school management committee, says Sharma has been extremely hardworking. It is because of his unstinted efforts that the school has been turned around.

“We’ve not known him to take holidays. He’s worked round the clock and has always been available. We knew of his reputation as a good headmaster and he has lived up to it,” says Ram Singh.

But turning a government school around is not easy. At this school there have been just six teachers, including Sharma, for the 159 students. Now three of them have been transferred, but the new teachers haven’t been posted to the school as yet.

The school’s success seems to be more the result of the personal drive and leadership of Sharma than a system that recognises innovations, institutionalises them and provides for succession. The question now is whether Sharma’s achievements will endure after him. 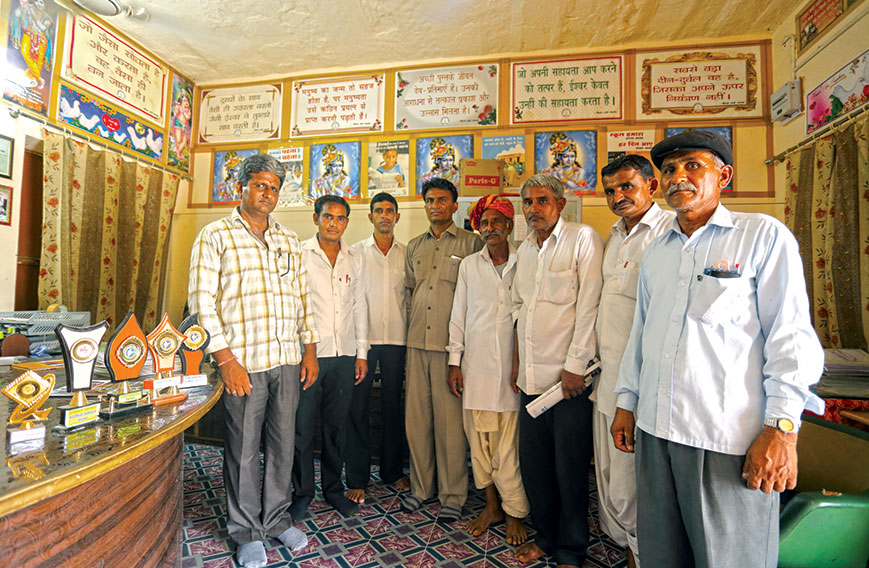 Gautam Sharma with teachers and members of the School Management Committee