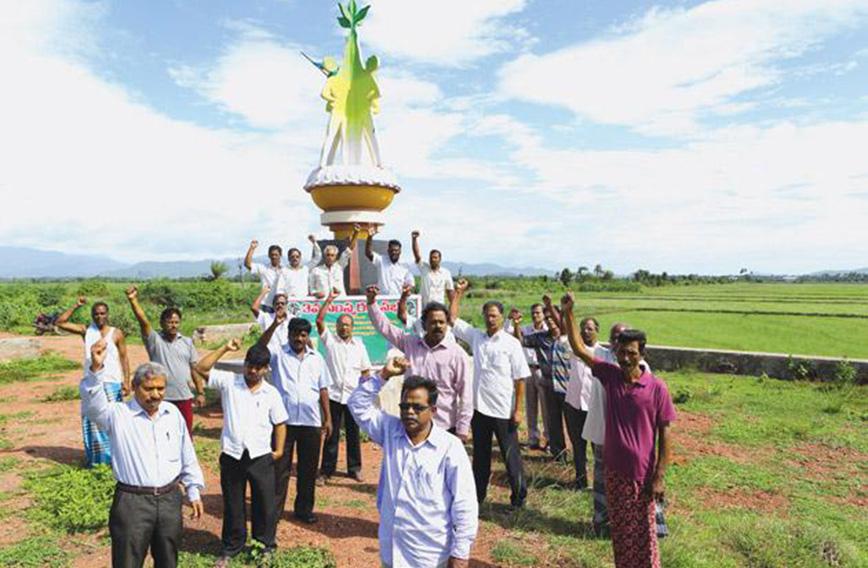 When the Andhra Pradesh government handed over 900 acres of a wetland or beela in Srikakulam district to a construction company to build a thermal plant, it was the soft-spoken local physician, Dr Yaradi Krishna Murty who became the guiding spirit of the agitation to stop the project.

The wetland was listed as a wasteland. The panchayat’s approval had not been sought. Farmers would lose their land. The beela was an inseparable part of their lives. It provided water for two paddy crops, fish and grasses.

The farmers held their ground courageously, enduring beatings by the police. Two farmers died in police firing during a protest. Eventually, the National Environment Appellate Authority visited the beela, declared it was most certainly a wetland, and cancelled the environment clearance given to the project.

It is a brilliant countryside awash in green and stretching all the way up to sand dunes and a sparkling coastline. There are paddy fields, water bodies, fisheries, jackfruit trees, coconut trees and vegetable gardens. In all, 18 villages on 5,000 acres make up this resplendent setting in Andhra Pradesh’s Srikakulam district. A highway runs through here, but for most part these villages are a world unto themselves and eager to stay ­that way.

When we showed up on 31 July, voting was in full swing for 16 panchayats. It was a vigorously contested election. But, interestingly, there was just one big issue: scrapping of plans for a thermal power plant in the area. Such is the popular anger over the plant that every candidate had promised to oppose it.

“It is the only issue,” said Dr Yaradi Krishna Murty, at his clinic in the Mahalaxmi Nursing Home at Sompeta, the mandal headquarters from where the campaign against the plant has been run by the Pariyavarna Parirakshana Sangham (PPS) along with support from the Teeraprantha Matsyakara Aikya Vedika (TMAV).

Dr Krishna Murty, 50, is an anaesthetist and a respected local physician. But in his avatar as activist he has found his life change dramatically. As the guiding spirit of the agitation for the past four years, he has been helping mostly unlettered farmers and fishermen express their fears and articulate environmental arguments against the plant.

With Dr Krishna Murty’s example before them, teachers, lawyers and small traders have joined the agitation.

A short, shy man who speaks in a soft voice, Dr Krishna Murty has the understated and reserved manner of a good physician. He certainly seems an unlikely activist. Yet he has held his ground boldly, braving beatings by the police and a mysterious bomb attack on the Mahalaxmi Nursing Home.

Asked why farmers have opposed the plant, Dr Krishna Murty says: “It is because of the loss of livelihoods. The plant will take away their land and destroy their agriculture. The jobs it will provide will be few in comparison and menial in nature. Right now the holdings are small and the farmers may not have much but their quality of life is good. They know no other life and won't be able to survive without their land.”

Dr Krishna Murty questions the benefits from a model of development which impacts the environment, takes away land and pushes out people without preparing them for the transition.

He himself belongs to a farming family in the area and became a doctor because of his passion for medicine. His father had wanted him to be a farmer. Instead, his brother agreed to work on the land so that he could go ahead and study.

Asked how he finds the time for both his practice and a cause as complex as this, Dr Krishna Murty says: “I treat it like an emergency case. It has to be done. There was a time when I, too, thought the power plant would be good for the development of the area. That it would provide jobs and electricity and stimulate economic activity in the area. But when I realised the impact it would have on the environment and the farmers it would displace, I changed my view and felt I should do my bit for stopping it.”

To him and other bravehearts in the PPS must go the credit of making protection of their local environment an election issue.

“After this no politician, be it an MLA or MP, will be able to support the plant or bring such a project here,” says Beena Dhille Rao, 53, a small farmer who was the first to oppose the plant.

Panchayats have an important role to play because their endorsement is needed for projects. Originally, the panchayats in the area gave their approval to the power plant without understanding the implications. But now the farmers are wiser and don't want such costly mistakes to be repeated.

“We want a panchayat leadership which is aware of what the environment means to the local farmers and fishermen and is not misled by a model of development that takes land away from people without offering them sustainable alternatives,” explains Dr Krishna Murty.

The Nagarjuna Construction Company (NCC) has been given the contract to set up a 2x660 MW plant on 900 acres of a beela, a large traditional water body located at Gollagandi village. The company acquired some 500 acres before it ran into a wall of opposition from the farmers.

The beela has a very special place in the lives of the farmers and sustains the local eco system. It becomes brimful during the rainy season with runoff from the Mahendragiri hills and it retains water all year round. It is thanks to the beela there are two paddy crops a year in the area. It provides various grasses and fish and attracts birds in large numbers.

But so poor is the government’s baseline data, that this productive water body has been listed as a wasteland in the government's records resulting in a power project being sanctioned on it.

At public hearings for the plant in 2009, farmers who didn't want the beela destroyed, were overruled, forcing them to begin an agitation. A prolonged awareness campaign since then has resulted in ranging popular opinion against the plant. Now it has become a choice between having the plant and losing the traditional way of life in the villages.

In 2010, farmers in large numbers protested against the plant and were fired on by the police. Two of them died and several were injured. A memorial has been erected at the spot just along the highway.

After the firing episode, the National Environment Appellate Authority visited the project site and said the beela was a water body and not a wasteland. It cancelled environmental clearance for the project and the company has since appealed against the order.

But rivalries continued to run deep and the panchayat elections in July were marked by high excitement.

Cell phones rang and beeped as voting trends kept coming in on counting day and the mood in the PPS was upbeat. Candidates of the PPS were leading everywhere. The winning trend continued as the day progressed.

But there was one surprising exception: Sompeta, where the PPS was leading  at first, but then lost. This was a curious turn of events because the most formidable champions of the cause, including Dr Krishna Murty, belong to Sompeta.

“We lost by a big margin,” Dr Krishna Murty said to us the next morning when we met him and other supporters at the proposed plant site.

The arithmetic of elections and politics is clearly different to the championing of a cause. The reason for the Sompeta defeat was put down to a PPS man having switched his loyalty to a political party with a stronger base and better resources for getting voters to booths.

But the panchayat elections and the concerns they mirrored have implications for the long term. Industrial units that want to be located along the highway and near the coast will have to strive hard to win local approval. The Sompeta campaign against the thermal plant has created an awareness of the environment and the rights of the displaced that never existed before.

Beena Dhille Rao became the first to oppose the plant when a relative in Visakhapatnam told him about the experience there with a thermal power plant. That plant had caused pollution and the jobs and money evicted people had got had been poor compensation for the land and the quality of life they had given up. He paid a visit and found these things to be true. Next he took other farmers with him to see for themselves and they came back convinced.

“The beela is everything for us,” says Beena Dhille. “Even in the height of summer we get water from it. It provides fodder for our livestock, fish and the grass from which we make thatched roofs and the hats which protect us from the sun. We also eat the roots of plants that grow in the beela.”

Deenna Gavaravah has bullet injuries in his legs. He was right in front appealing to officials to listen to the farmers when the police opened fire. He too has been to Visakhapatnam to see the thermal plant there and come back worried.

“Jobs are of no use in comparison to growing paddy on your own land,” he says.

On the fringes of the beela we sit with T. Easwar Rao and S. Dharma Rao, both men of the area who have no significant landholdings. They have been to New Delhi and done odd jobs, but come back.

They too have joined the agitation against the plant saying that they are better off with their homesteads and the natural biodiversity of the area.

Easwar Rao says he watches the Discovery channel and many of the birds he sees on TV he spots at the beela. “The plant will be very destructive. Why doesn't the government think of developing tourism here? We have such a good coastline as well.”

Dr Krishna Murty laments the lack of baseline data with the government. “How can an area so rich in biodiversity be recorded as a wasteland?” he asks.

Equally worrisome is the apparent lack of a process for consultation before a project is sanctioned. The public hearings for the plant did not record the views of the majority of the farmers.

But where the government has failed, the PPS has succeeded by creating the space in which unlettered farmers can understand the science of their environment, express themselves and make a choice in their own interests.

Umesh Anand was at Sompeta on polling day