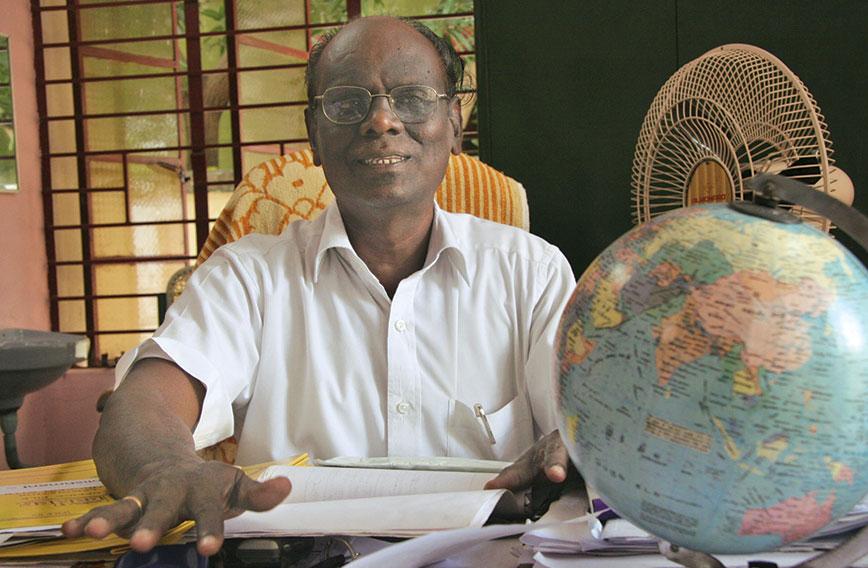 K. Loganathan has been successful in driving out the fear of mathematics from his students. His ability to bring maths alive is rare. He invented Angle Tangle, an interactive software that teaches geometry through body language.

In 2009, he was made headmaster of the Government Girls’ Middle School in a village     seven km from Puducherry. He changed the ambience of the school completely. The school was next to a dumpyard but Loganathan made sure that the school’s premises were clean, with working toilets, neat classrooms and drinking water.

Loganathan is doing all the right things — he has introduced extra-curricular activities, regular parent-teacher meetings and counselling for students. The teachers at his school do not beat or threaten the children. They believe that reasoning it out with the child is a better solution. Almost all his students clear their maths papers. This is remarkable because many of his students are from very poor families, some even first-generation learners. He is the teacher every child deserves.

Mathematics is a subject which drives many children to tears. But students of the Government Girls’ Middle School at Veerampatnam, near Puducherry, don’t have to live with such stress. Their headmaster, K Loganathan, has been an inspired maths teacher for 20 years and knows how to make the subject easy and interesting.

In his long innings, Loganathan’s students have been known to mostly clear their maths papers. It is quite an achievement because government school children come from poor homes where there is no money for tuition classes and special attention.

The secret of his success is his ability to bring maths alive. Take the example of Angle Tangle which he created as an interactive software for teaching geometry through body language. Your arms can form a right angle or fold into an acute angle.  You can watch nature too. It is full of geometrical shapes and sizes. So are objects we come across every day.

Loganathan, 57, says he always wanted to be a teacher. He graduated in mathematics and did his post graduation in English and psychology. He now has 36 years of experience and never has he regretted his decision to become a government school teacher.

The village of Veerampatnam is around 7 km from Puducherry. Loganathan was transferred here about a year ago. He arrived with an impressive track record as headmaster of Government Middle School, Nallavadu, another village close to the sea.

Loganathan found the Veerampatnam school was located near a stinking dump yard which locals used as an open toilet. The school’s verandah was often reduced to a parking lot.  Loganathan acted with vim and vigour. He first made the school safe and secure for children. He had limited resources so he used his imagination and built a natural fence with plants, shrubs and trees interspersed with barbed wire and bamboo. That at once kept out intruders and prettied up the premises.

Loganathan changed the ambience of the school. With the money he had, he converted the school into a clean and green place with spic and span toilets, drinking water and neat classrooms. To spread awareness of sanitation, he held a rally urging residents to construct toilets in their homes.

In 2008, the school launched a ‘Green School Initiative Project’ not just for its own premises but the entire coastal village. The students planted hundreds of saplings, installed a water meter in the school to check misuse of water and spread information about energy conservation. They began recycling waste and started a compost yard. The students also documented local biodiversity and wildlife and told villagers to protect  turtles.

As coordinator of the Sarva Shiksha Abhiyan, Loganathan has been involved in teacher training, helping other government school teachers to make learning easier for students. The emphasis is on reducing homework and getting children to do small engaging projects. Passing on of skills is crucial to improving the standards in government schools. Teachers often feel no sense of motivation because there is little to aspire to. It is important to raise the bar and create a sense of mission. Training teachers also involves igniting the spirit within them to serve the community.

Teachers at his workshops make a public statement that children should not be beaten or threatened. “When we can reason it out with the children why should we hit them? Most of our students come from poor families and have no one to care for them. Since we understand their plight we don’t scold the child and instead give them another chance to complete their work,” the teachers declare.

It was as a coordinator of the Sarva Shiksha Abhiyan that he invented Angle Tangle. His Computer Aided Lab in Nallavadu is a role model for  government schools. All information relating to the school, including particulars of each teacher has been computerised and displayed.

In 2006 there was a deadly outbreak of chikungunya in Nallavadu. Loganathan’s science project on chikungunya fever, explaining the illness, won him a prize at the Make Science International Competition organised by the University of Paris and the Pondicherry Science Forum. Loganathan was given  a cash prize of 50 Euros with which he bought a cart which for transporting midday meals inside the school.

He also helped to start a night school for children from the fishing community.  Special attention was paid to slow learners. The Education for All campaign, which goes door to door encouraging dropouts to go back to school, was undertaken by him.

Loganathan has improved the quality of education.  He has introduced extra curricular activities, guidance and counseling as well as regular parent-teacher meetings in government schools.  You can see gleeful children and grateful parents in his school.