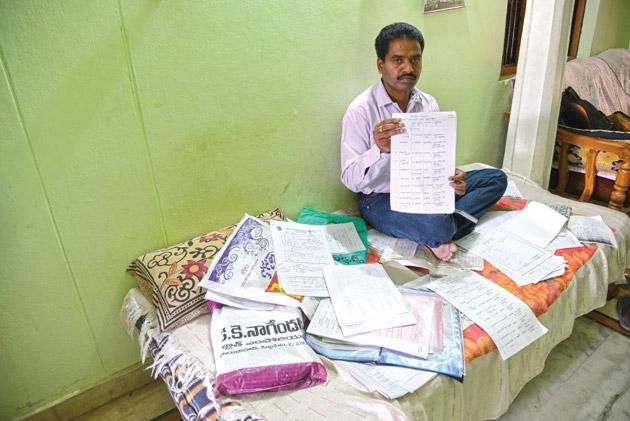 Puli Raju with his lists of dead farmers

Puli Raju, a government schoolteacher in Medak district in Telangana, has been keeping track of farmer suicides since 2004. With proper documentation like the death certificate, his list of farmers who took their own lives sits at 1,800. However, many farmer suicides go unreported and the figure could be as high as 3,000. When he filed an RTI application, he found that the official figure is 1,474. Why were such a large number of deaths not in the official records? "The government prefers escapism. It gives smaller numbers because it does not want its reputation tarnished," says Raju.

Raju is more than a record-keeper. He tries to do as much as he can to help families shaken by the distressing death of a breadwinner. The families have to deal with moneylenders and banks. There are bills to be paid.

When a farmer named Kishtaya committed suicide, his wife, Yadamma, wanted her sons, Sandeep and Sandesh, to stop going to school and help her in the fields. A teacher at the school, Papi Reddy, stepped in to pay the boys' fees.

The government is far removed from such personal trauma and it is people like Puli Raju and Papi Reddy who help in their individual capacities.

Puli Raju, 42, is a government schoolteacher at Gajwel in the Medak district of Telangana. His wife is also a teacher and with two incomes they are well off, living as they do in a small town. But Raju has shown no inclination to sink comfortably into a secure existence. It is several years now that he has been taking up the problems of farmers in a troubled rural economy. He has a list of 1,800 names of farmers who have taken their own lives since 2004 because they haven’t been able to manage their fields successfully.

Raju filed a right to information (RTI) application to know from the government the official figure for suicides by farmers in Telengana. He was told 1,474 had taken their own lives between 1999 and 2012. The information came out of the Crime Records Bureau.

Raju disputes the figure. He says it should be around 3,000. Sitting on a divan in the small living space of his rented flat in Gajwel, he shows many lists to prove that he has been diligent in coming to the figure of 1,800 suicides since 2004. These are only those suicides that have been recorded. He is sure there are many others that haven’t come to public notice.

“I have been collecting data since 2004,” he says. “ I have interacted with 370 families. My list of 1,800 farmer suicides includes proper documentation like First Information Reports (FIR), death certificates and all other proofs of identity.”

According to Raju, most of the farmers who committed suicide had debts of between Rs 300,000 and Rs 600,000, which are significant amounts considering that 90 per cent of farmers here are small farmers with holdings of not more than five acres. As small afrmers they are entitled to loans of only Rs 30,000 from banks.

“The government prefers escapism. It gives smaller numbers because it does not want its reputation tarnished,” says Raju.

The deaths have disturbing social implications. They also signal a deep malaise in the rural economy. There are multiple reasons for the financial problems that invariably drive farmers to suicide. Farming as an occupation is becoming unsustainable and there aren’t alternative forms of employment either.

Explains Raju: “After the head of the family commits suicide, the family undergoes many problems. Usually boys in this region get married between the age of 20 and 25. Girls get married between 18 and 20. Ninety percent of widows here are between 20 and 30. As long as the man lives, the women face no problems. But after his death, everything changes. She has to take care of her family, her children, their education and marriage expenses. The lady who never even purchased a matchbox will now have to bargain over seeds and pesticides with the agents.”

“Above all, moneylenders harass them for the money their husbands borrowed. The woman has to pay back the debt because these moneylenders themselves aren’t rich and live off the interest,” says Raju. “Since the women have no option they end up selling whatever little they have.”

Asked why the women don’t remarry, Raju says: “So far, I haven’t seen any woman remarrying. This is because they have a lot of responsibilities like children, in-laws and debts.”

The children suffer too. They drop out of school and work in the fields as daily labourers.

Raju takes us to meet Yadamma, who lost her husband, Kishtaya, in December last year. This family owns no land, but has taken a few acres on lease at Rs 15,000 an acre. When the crops failed, Kishtaya sank into debt.

Says Yadamma: “My husband couldn’t clear the mounting debts and spoke to me about it a couple of times. But I never thought he would leave us and go. I am not educated. All I know is farming. As a daily labourer, I get paid Rs 100 per day. And this is the only income I have with which I have to raise my children.”

We had picked up her two boys, Sandeep and Satish, from a government school on the way to the fields where we were to meet Yadamma. As we walked up to her, the boys broke into a run and clung to their mother.

The government is far removed from the personal trauma that such families experience. Neither the state’s suicide figures nor its promises of financial relief take into account the emotional upheaval the family undergoes.

“At one point, I stopped sending my children to school and made them work with me as labour in the fields. But one of their teachers (in the government school) insisted that I send them to school. Now they are continuing with their education,” she says.
The teacher, P. Papi Reddy, says: “I adopted Sandeep and Satish. Their mother wanted them to work. But I insisted they continue to come to school. I get them books, pens and clothes. I’ll support these children as much as I can.”

The state provides no social support at all. It is left to individuals like Puli Raju or Papi Reddy to reach out in their limited personal capacities. With rural distress growing there is actually very little that individuals can do.

Raju comes from a farming family that owns 15 acres. But it was his grandfather who first advised his father to get an education and find a job. That didn’t happen. Raju, however, did a Masters in economics and became a teacher. When he goes home on leave, he still works in the fields with his siblings who haven’t been able to move on in the way he has.

Raju says chemical fertilisers and commercially grown seeds are major reasons for the decline in agriculture in Telengana. There is also a chronic shortage of water. The area is rain fed and wholly dependent on groundwater, the search for which goes deeper and deeper. Water harvesting could have been a solution, but it is not promoted.

“During my childhood, we used organic fertilisers like cow dung and droppings of pigs, goats and sheep. Then artificial fertilisers came into the picture and we used two kg of fertiliser per acre. At present we use six to seven kg of fertiliser per acre,” says Raju.
It is the same story with seeds. Families used to store and use their own seeds. They began buying seeds from companies in the belief that yields would rise significantly. Commercially grown seeds are good only for two crops after which they have to be bought again.

“We were influenced a lot by the agents who come from nearby towns and convinced us to buy and use company seeds. We had no complaints as long as we used our own seeds. But now we have to buy seeds repeatedly from the same company,” says Raju.
“At times, we are tricked by local agents who sell us poor quality seeds. There is no way of knowing this till the crop comes up. It is a lose-lose situation for us.”

As a result of these developments, expenses have kept rising and productivity has gone down. The absence of regulation has led to the promotion of unscientific practices for commercial gain. Since the farmers’ rights as consumers are not protected, they have no authority to turn to. Finally, there is little access to finance that helps farmers out of dodgy situations. They are forced to turn to exploitative moneylenders.

“When employees can get housing loans, vehicle loans and personal loans, why can’t farmers get loans? They only get a loan up to Rs 30,000. And it is tough to get the loan approved. The farmers who approach banks asking for loans are always humiliated and disrespected by the employees of the banks. Completing the loan procedures is a herculean task and to make multiple trips to the banks during the kharif season is something which any farmer would hate,” says Raju.

The lack of water has also assumed menacing proportions. Raju speaks about his family’s experience, but he could just as well be speaking for all the farmers in Medak district.

“We completely depend on borewell water. In our fields we dug a borewell in 1993 and water was traced only after 300 feet. We still depend on the same borewell. After that, we dug five borewells and none could provide water. We don’t do water harvesting. Our lands get water only when it rains. Farmers spend a lot on borewells. A failed borewell costs around Rs 45, 000. And the cost of a successful borewell, which gives water, goes up to Rs 100,000.”

Raju believes that awareness programmes are needed to help farmers update themselves. NGOs should provide a counterbalance to commercial interests. Social enterprises can boost market connectivity, putting more money for produce into the hands of farmers.

The major solutions to farmer suicides are supply of water, loans and income security, Raju says. This is well-known. Yet the state does not move a finger.